When will we know the 2020 election results? A guide to possible delays 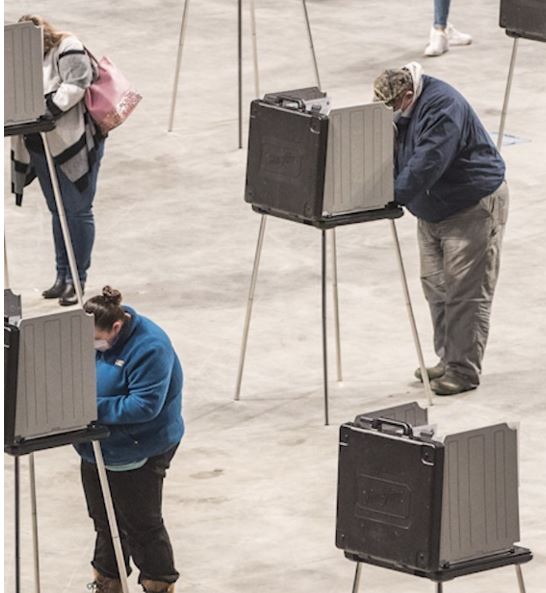 Election officials say the country should be prepared not to know who won the White House on Election Day, citing a surge of mail ballots that some states will need extra time to count.

Already this year, several states needed additional time to count ballots in this year’s primaries, causing delays of a week or more before the release of results in some key races in New York and Kentucky.

In many cases, the longer counting periods were attributed to a surge in mailed ballots owing to the coronavirus pandemic, a trend that is expected to continue in November. Election officials stress that accuracy is more important than speed.

Here are some questions and answers about potential delays to election results.

Will we know who won the presidential election on election night?

There is a good chance that we won’t know the winner on election night, say election officials. That would be a big change for many Americans.

“We have to prepare for the very strong probability that an election unlike any other we’ve ever had might take a little longer to accurately count with integrity,” said David Becker, executive director and founder of the nonpartisan Center for Election Innovation & Research, a group in Washington, D.C., that works to improve election administration. “More time being taken to report results is not an indication of a problem.”

A big reason is that an unprecedented number of Americans are expected to vote by mail because of coronavirus concern, and it can take more time to count mail ballots than in-person ones. Additionally, depending on the law, some states will count ballots that are delivered after the election if they are postmarked by a deadline.

Even in a normal year, the results announced on election night are considered unofficial by election authorities. States generally conduct a certification process to verify the final tally, which can take weeks. That is potentially more significant in a close race.

If results are delayed, it wouldn’t be the first time in recent memory that the presidential winner isn’t clear on election night. In 2000, a recount dispute in Florida took more than a month to resolve.

Counting mail ballots can take longer than in-person votes for several reasons, such as the time it takes to open return envelopes or verify signatures, depending on what a state’s law requires.

Some local election offices won’t likely have enough extra staff or sophisticated technology to speed up the process. Many state and local officials are scrambling to prepare, although they face time and budgets constraints.

Depending on state laws, some states will accept ballots as long as they are postmarked by Election Day, even if received by election offices some days later. That is likely to slow the counting and release of results.

Some states have seen legal battles over whether deadlines should be extended to account for the large number of mail-in ballots during the pandemic, including the battleground states of Pennsylvania and North Carolina.

New York’s June 23 primary provided a preview of logistical challenges that could affect counting in November. In two congressional races, after laborious counting and legal fighting, it took six weeks to declare the winners.

Frederic M. Umane, the secretary of the New York City Board of Elections, said two of the issues concerned postmarks and signatures that didn’t meet requirements for mail ballots. For November the board planned to speed up the system by buying extra equipment to enable the processing of 100,000 envelopes a day.

Do the challenges of counting so many mailed ballots affect some states more than others?

Some states have been slow to report results. One example is California, where voting by mail was increasingly popular even before the pandemic. In 2018, it took a week and a half before the Associated Press declared the winner of a key House race in Orange County, where four congressional seats flipped to the Democrats.

Laws in some states prevent officials from beginning to count or process mail ballots before Election Day. In those states, some election officials have lobbied for changes to allow more of those steps, including the opening of outer envelopes, to begin earlier.

Washington state, on the other hand, has been voting by mail for years and has adjusted processes to speed up counting, said Mr. Becker from the Center for Election Innovation & Research. States with more experience with voting by mail often allow for early processing, particularly of the envelopes, which allows for faster counting of the ballots, he said.

What does President Trump have to say about voting by mail?

President Trump has said he opposes universal vote-by-mail and doesn’t support automatically mailing ballots to registered voters, which he claims would invite fraud. He has said he is OK with states where a voter must request a mail-in ballot in advance.

Researchers have found instances of fraud linked to mailed ballots, but studies show it hasn’t been widespread and election officials say they employ safeguards.

Some Republicans worry that Mr. Trump’s stance might discourage supporters from taking advantage of a convenient voting option because the terms “absentee voting” and “vote-by-mail” are sometimes used interchangeably.

In Florida, for example, the state doesn’t use the term absentee voting and instead refers to its process as vote-by-mail. Mr. Trump appeared to acknowledge that in a tweet on Aug. 4, which said, in part: “Whether you call it Vote by Mail or Absentee Voting, in Florida the election system is Safe and Secure, Tried and True.”

In the past, the Republican Party has encouraged supporters to vote by mail in politically important states, including Florida, Pennsylvania, Wisconsin and Arizona.

Mail-in ballots have been at the center of legal battles in multiple states between Democratic and Republican groups.

Democrats have sought changes they say make it easier to vote by mail, including counting ballots postmarked by Election Day, even if they are delivered to election officials some days later. The Trump campaign and other Republican groups have repeatedly opposed changes to voting procedures, saying last-minute changes will lead to logistical confusion surrounding the vote.