Why aren’t the Democrats trouncing these guys? 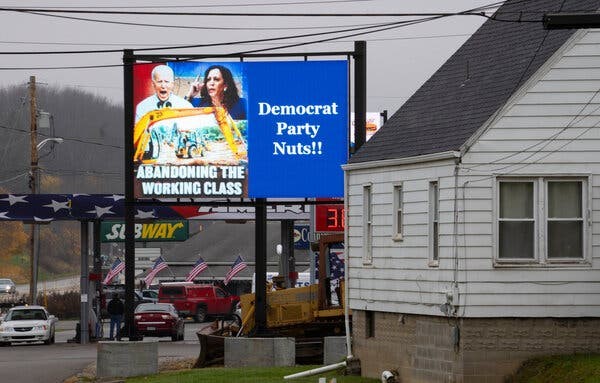 Nothing the parties or candidates have done has really changed this underlying balance. The Republicans nominated a pathetically incompetent Senate candidate, Herschel Walker, in Georgia, but polls show that race is basically tied. The Democrats nominated a guy in Pennsylvania, John Fetterman, who suffered a stroke and has trouble communicating, but polls show that that Senate race is basically tied.

After all the campaigning and the money and the shouting, the electoral balance is still on a razor’s edge.

“Education polarization is not merely an American phenomenon,” Eric Levitz writes in New York magazine, “it is a defining feature of contemporary politics in nearly every Western democracy.”

Over the past few years, the Democrats have made heroic efforts to win back working-class voters and white as well as Black and Hispanic voters who have drifted rightward. Joe Biden’s domestic agenda is largely about this: infrastructure jobs, expanded child tax credit, raising taxes on corporations. This year the Democrats nominated candidates designed to appeal to working-class voters, like the sweatshirt-wearing Fetterman in Pennsylvania and Tim Ryan in Ohio.

It doesn’t seem to be working. As Ruy Teixeira, Karlyn Bowman and Nate Moore noted in a survey of polling data for the American Enterprise Institute last month, “The gap between non-college and college whites continues to grow.” Democrats have reason to worry about losing working-class Hispanic voters in places like Nevada. “If Democrats can’t win in Nevada,” one Democratic pollster told Politico, “we can complain about the white working class all you want, but we’re really confronting a much broader working-class problem.” Even Black voters without a college degree seem to be shifting away from the Democrats, to some degree.

Forests have been sacrificed so that Democratic strategists can write reports on why they are losing the working class. Some believe racial resentment is driving the white working class away. Some believe Democrats spend too much time on progressive cultural issues and need to focus more on bread-and-butter economics.

I’d say these analyses don’t begin to address the scale of the problem. America has riven itself into two different cultures. It’s very hard for the party based in one culture to reach out and win voters in the other culture — or even to understand what people in the other culture are thinking.

As I’ve shuttled between red and blue America over decades of reporting on American politics, I’ve seen social, cultural, moral and ideological rifts widen from cracks to chasms.

You can’t isolate the differences between the classes down to one factor or another. It’s everything.

But even that is not the real problem. America has always had vast cultural differences. Back in 2001, I wrote a long piece for The Atlantic comparing the deeply blue area of Montgomery County, Md., with the red area of Franklin County in south-central Pennsylvania.

I noted the vast socioeconomic and cultural differences that were evident, even back then. But in my interviews, I found there was a difference without a ton of animosity.

For example, Ted Hale was a Presbyterian minister there. “There’s nowhere near as much resentment as you would expect,” he told me. “People have come to understand that they will struggle financially. It’s part of their identity. But the economy is not their god. That’s the thing some others don’t understand. People value a sense of community far more than they do their portfolio.”

Back in those days I didn’t find a lot of class-war consciousness in my trips through red America. I compared the country to a high school cafeteria. Jocks over here, nerds over there, punks somewhere else. Live and let live.

Now people don’t just see difference; they see menace. People have put up barricades and perceive the other class as a threat to what is beautiful, true and good. I don’t completely understand why this animosity has risen over the past couple of decades, but it makes it very hard to shift the ever more entrenched socio-economic-cultural-political coalitions.

Historians used to believe that while European societies were burdened by ferocious class antagonisms, Americans had relatively little class consciousness. That has changed.

David Brooks has been a columnist with The Times since 2003. He is the author of “The Road to Character” and, most recently, “The Second Mountain.” @nytdavidbrooks

Facebook
Twitter
Email
PrevPreviousDemocracy was on the ballot. And voters knew it.
NextDid Ron DeSantis just become the 2024 Republican front-runner?Next