Will the freedom to protest survive in the ‘Free State of Florida’? 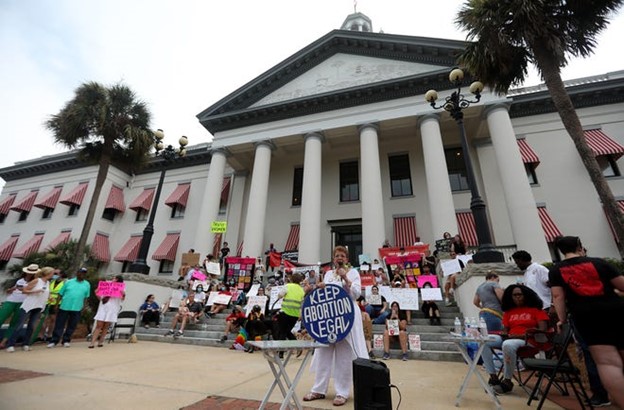 By the Sarasota Herald-Tribune Editorial Board, Dec 8, 2022.

There are too many decision makers in our state who view our cringey “The Free State of Florida” slogan as a perpetual free pass to decide among themselves just how much freedom Floridians are actually entitled to enjoy.

► Do you believe children in Florida should have the freedom to embrace their true identities as they go through their transformative years in school?

Just look at the passage of the outrageous Parental Rights in Education bill, which critics commonly refer to as Florida’s “Don’t Say Gay” .

► Do you believe women in Florida should have the freedom to feel assured that their reproductive rights are fully protected?

Um, once again, not so fast.

Just look at the efforts in the Florida Legislature to impose draconian restrictions on reproductive rights.

► Do you believe educators in Florida should have the academic freedom to teach students about America’s past in an intellectually honest way that celebrates our blessings and triumphs as a nation without ignoring our past sins and deficiencies?

Um, yet again, not so fast.

Just look at our governor’s relentless zeal in spewing rhetoric and issuing dictates – most notably, the lawsuit-riddled Stop WOKE Act – that demonize any attempt to give students an authentic, well-rounded understanding of America’s racial history.

Sadly, there are many more examples – book-banning, anyone? – of the Orwellian appetite among numerous state leaders to view “freedom” not as a right to be openly cherished by all Floridians, but one to be actively stifled for some Floridians.

►Florida: The ‘freedom state’ that still isn’t free of COVID

The latest exercise in hypocrisy regarding “freedom” in our free state is being carried out by the Department of Management Services, which has proposed new rules aimed at limiting the ability of protesters to gather at the Capitol in Tallahassee.

The department, citing hand-wringing concerns about recent protests in the Capitol building and other areas, wants to broaden the power of law enforcement officials to charge protesters for trespassing – and to break up demonstrations that are viewed as disruptive.

But when exactly, under these new policies, would a protester cross the line that separates criminally “trespassing” from simply exercising one’s First Amendment rights in a traditionally public place?

And when exactly, under these new policies, would a protest cross the line that separates a lively demonstration from one that has somehow become “disruptive”?

Who knows? And, even more troubling, “Who cares?” seems to be the state agency’s attitude in proposing these revised policies, which represent the sequel to House Bill 1, the equally vague anti-protesting bill passed last year in the Florida Legislature.

And make no mistake: Just like the heavy-handed House Bill 1, the Department of Management Services’ protest proposal has the unmistakable stench of anti-free speech hostility all over it.

That alone is enough reason to oppose it, and Floridians should feel “free” to make their opposition clear.

– This editorial was written by Opinions Editor Roger Brown for the Herald-Tribune Editorial Board.