PUNTA GORDA — Downtown weekends are mostly hushed, blocked streets for a farmers market, visitors sipping hot coffee or a cool beer.  But this Saturday was different, as hundreds of people protesting recent limits on reproductive rights arrived in the downtown square.

The Bans Off Our Bodies rally was a coalition of social groups, church members, kids, moms and dads, friends and strangers, all in unison against the U.S. Supreme Court’s recent overturn of a 1973 decision on abortion. They chanted, waved signs, heard speakers, then lapped downtown. That federal ruling fueled things, as the two-hour rally gathered steam around noon, intensified and eventually blocked traffic in a peaceful march.

“Women should have a choice,” said Melinda Gillespie, a co-organizer.

Rally supporters trickled into the downtown 45 minutes before the noon start. They practiced their war cries in chorus, “My body, my choice,” for instance.

In the lull, one supporter argued with a passing Cape Coral woman. Lina Wax had urged protesters to “take ‘responsibility” in the making of children. “I don’t hear anything about that,” Wax said.

But once that flare-up subsided, the trickle became a rush — hundreds poured into the empty square at West Marion Avenue and Taylor Street. Gillespie said a social media push caught fire, delivering an outpouring of support, she said. “We just want our voices heard,” she said.

The public message was countered by Louis LaBarbera, a 21-yearold Port Charlotte man stationing himself across from the rally. He came with a bullhorn and a red Make America Great Again ballcap on his head. “I’m spreading the message of God and life,” he said, “and this is where the people are at.”

The event was also incentivized by a Florida judge Thursday temporarily blocking the state’s 15-week limit on abortions. Judge John C. Cooper ruled in Leon County Circuit Court that the new law violated the privacy provision of the state’s constitution. On Friday, however, the law went into effect because the judge hadn’t put his order in writing.

Rally supporters had said the rules are confusing, for women, for hospitals and for health-providers. Speakers included educators on civil rights and women’s history.

“I’m supporting my wife,” said Jonathan Miro, whose wife Staphany was a rally co-organizer. “And it feels great. I will always support women, 100%.” 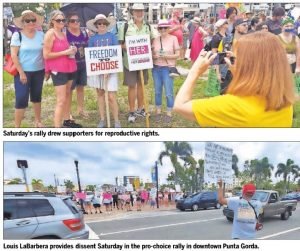 Facebook
Twitter
Email
PrevPreviousPunta Gorda, airport officials want to ‘grow together’
NextArguably one of the most important Independence Day speeches ever madeNext