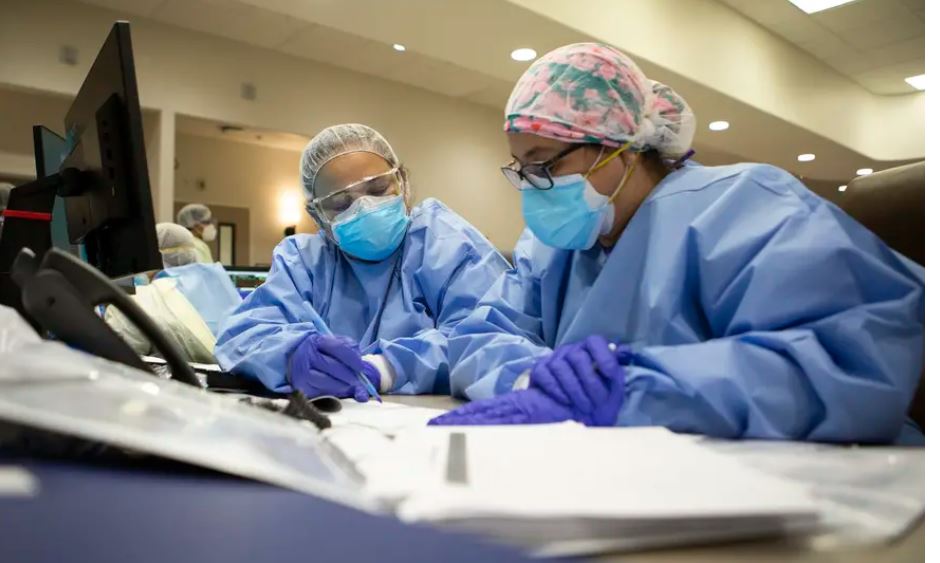 Florida’s second summer of COVID-19 is looking a lot different than 2020’s midyear surge, when the state was locking down, masking up and eagerly awaiting the arrival of vaccines.

One big difference: This time, there’s plenty of vaccine that has proved effective against COVID-19. But many folks are reluctant to take the jab, and about half of all eligible Floridians are still not fully immunized.

Meantime, cases are soaring daily, breaking records and prompting hospitals crowded with mostly unvaccinated patients to postpone nonemergency surgeries, restrict visitors and even require their staff to get vaccinated.

New laws and executive orders signed by Republican Gov. Ron DeSantis also have imposed strict limits on public safety — making the state vulnerable to a highly contagious variant that the governor has downplayed as a “seasonal” spike in cases.

This hands-off approach by the governor and state Republican leadership to the current COVID-19 surge, preferring to let people make their own decisions in consultation with their physicians, has left local governments and businesses to their own devices.

“We’re basically left with people having to decide for themselves what they need to do to bring this to closure,” said Dr. Marissa Levine, a public health expert at the University of South Florida-Health, and a former Virginia state health commissioner.

But the hands of local governments, school boards and businesses are tied by new regulations.

DeSantis last summer stayed out of the way of local governments restricting business hours, mandating masks and distancing in public venues to stem the tide of virus spread. Since then, he’s reversed course. The governor has stripped authority from cities and counties to mandate masks, limiting the duration of their emergency orders and signed into law a measure that shields nursing homes, hospitals and businesses from legal liability if employees and patrons contract the virus on their premises.

And he’s gone from merely discouraging mask mandates for K-12 students to directing the Department of Education to penalize districts that enact them by withholding millions of dollars in state education funding.

The governor’s decision to rescind local mitigation efforts and bar school boards from requiring students to wear masks is politically motivated, and a dangerous preemption of local control, according to Cecile Scoon, president of the Florida League of Women Voters.

“I am urging the public and local governments to basically do what’s best for themselves without regard to if this is making me look like a good person with my party or not,” Scoon said. “The disease doesn’t care about what party affiliation you have.”

Local governments should be free to examine what is happening in their community and take the action they deem best. “If they’re saying we should take corrective action, the state should listen to that,” Scoon added.

This summer, cities and counties are left with a narrow set of options. Most are encouraging vaccinations, providing testing, stepping up pressure on staff to get vaccinated and demanding that the public wear masks inside government buildings. “Only three tools are available to local governments: Vaccinations, testing, and masks,” said Jared Moskowitz, the state’s former director of emergency management.

In the three months since Moskowitz left, DeSantis has declared the state of emergency over. The state shut down state-run testing and vaccination sites and stopped providing daily reports on COVID-19 data.

Local governments can expand testing, Moskowitz said. “In addition to vaccinations, this is the second biggest thing local governments can do,” he said. “They can use testing to identify and isolate people who test positive and carry the virus to others.”

They can also push vaccinations, he said: “The good news is that the vaccine works. It’s not a debate.”

Some cities and counties have launched door-to-door neighborhood campaigns to try to combat misinformation about the vaccine’s effectiveness. Cities and counties can also require masks for entry to government buildings, but cannot fine people for not wearing them, said Christina Pushaw, a DeSantis spokeswoman.

Nor can they “impose mask mandates on their entire jurisdictions, outdoor spaces, or private businesses,” Pushaw said.

While Leon and Orange counties are among a handful of counties demanding that government workers be vaccinated, such actions could clash with a prohibition enacted by DeSantis on any business or government wanting proof of COVID vaccination, which he dubbed a “vaccine passport.”

At least one Republican governor facing spiking COVID numbers has changed his position. Arkansas Gov. Asa Hutchinson said he regrets signing last year’s ban on mask mandates and wants to call a special session of the state legislature to lift the ban so schools can require students to wear masks when they return to class.

Pushaw said the governor’s policies “protect individuals from local government overreach” and give Floridians the freedom to make their own decisions in consultation with their health care providers.

“Local governments will not be able to issue edicts that close businesses, places of worship, schools, etc. Fortunately, no local authorities have suggested such draconian policies,” Pushaw said.

While DeSantis raised his national profile last year by refusing to issue a statewide mask order and bristled at lockdowns, he didn’t stand in the way of local government actions.

Now, the Republican governor, backed by a handpicked group of medical experts, is defying the majority of health care experts who call for reinstituting strict measures against the highly infectious delta variant coursing through the state and nation.

And he’s even defying President Joe Biden, who singled out the governors of Florida and Texas recently as obstructing efforts to stem the tide of the COVID surge.

“If you’re not going to help, get out of the way of the people that are trying to do the right thing. Use your power to save lives,” Biden said.

At a news conference Wednesday in Panama City, DeSantis said he rejects any federal push to force masks on every child in Florida and other restrictions. He later pushed out a fundraising appeal by email headlined, “I’m Standing In Joe Biden’s Way.”

In his latest executive order for schools – which blocks mask requirements for students returning to classes this month – DeSantis was unyielding.

Still, some school boards are testing the waters to see how far they can push without crossing the governor and risk losing millions in state funding.

After initially saying it would comply with the governor’s executive order, Broward County schools plan to keep its mandate in place. Duval County Schools approved a mask mandate Tuesday night that allows parents to opt out.

However, in a move spurred by the uprising by school districts, state education officials came to the governor’s defense. Students subjected to the “harassment” of having to wear masks in class would be eligible to transfer at taxpayer expense into another public or private school under an emergency rule adopted Friday by the state Board of Education.

The move became the latest thrust by the DeSantis’ administration against mask mandates endorsed by several Florida school districts on the eve of the start of school, amid one of the nation’s biggest surge in new COVID-19 cases and hospitalizations.

The Centers for Disease Control and Prevention has reported that Florida now leads in pediatric COVID-19 cases and hospitalizations, especially among children eligible for the vaccine.

“Florida tragically leads the nation in children hospitalized due to the virus,” said U.S. Rep. Charlie Crist, a Democrat running for governor in 2022. “But instead of trying to stop the spread and protect our kids, who aren’t eligible yet for the vaccine, he wants to defund the school systems trying to keep them safe. It’s unconscionable.”

Private businesses are also struggling with whether to require masks of customers and vaccinate staff.

“Last year, everybody in a lot of counties who walked into a gas station or store had to have a mask on – now cities can’t require that,” said Rich Templin, a lobbyist with the AFL-CIO, which represents more than 500 labor unions wrestling with workplace issues related to COVID-19.

Unlike last year, businesses now have blanket immunity, he said.

“Now, some are wisely encouraging their own workers and customers to wear masks. But still, in state law, we are incentivizing bad behavior,” Templin said.

Many businesses – including Publix, the state’s largest private employer – have begun again requiring them at least for employees, “because it provides a certain level of consumer safety,” said Bill Herrle, executive director of the National Federation of Independent Businesses.

“We saw an extreme level of hesitancy last summer among people going into businesses,” Herrle said. “Since then, there’s been so much pent-up consumer demand. But companies still have to be concerned if people make the decision to stay away.”

Restaurants, which weren’t allowed to return to full capacity until last September, are also struggling with how to react to the new spike in cases.

Il Lusso, an upscale Italian restaurant blocks away from the Florida Capitol, shut its doors the weekend of Florida State University’s summer graduation last weekend and doesn’t plan to reopen until Monday rather than risk exposing customers.

The Florida Restaurant and Lodging Association has been providing guidance based on the Centers for Disease Control and Prevention guidelines and best practices from the National Restaurant Association, said spokesperson Ashley Chambers.

“Talking to some of the members, we found that they didn’t think that they could require guests to wear masks,” Chambers said. “The law doesn’t restrict businesses, and there is confusion between masks and vaccine passports.”

Other restaurants are continuing to maintain strict sanitation standards imposed during last year’s surge too, she said.

“People ask how to keep guests safe, employees working, and businesses open,” Chambers said. “If they want to shut down to do a deep clean, that’s great. Whatever works best for them.”

Levine, the USF public health expert, said that despite the state entering its second summer of COVID-19, DeSantis and his allies in the Legislature and business still have not fully embraced the underlying theme of public health.

“He continues to be divisive at a time when we need to be working together,” Levine said. “Our health is not just our individual responsibility – it emerges from our collective action as well.”

Moskowitz also called for unity in fighting the COVID scourge.

“Even though it doesn’t feel like it with the world going sideways, we are still all in it together. Bickering and political infighting doesn’t help,” Moskowitz said.