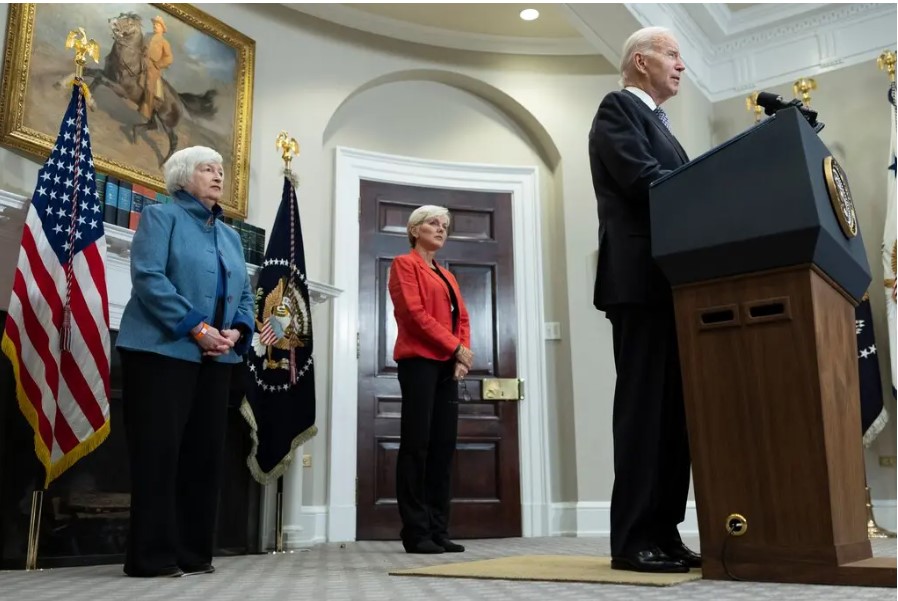 WASHINGTON — President Biden threatened on Monday to seek a new windfall profits tax on major oil and gas companies unless they ramp up production to curb the price of gasoline at the pump, an escalation of his battle with the energy industry just a week before the midterm elections.

The president lashed out against the giant firms as several of them reported the latest surge in profits, which he called an “outrageous” bonanza stemming from Russia’s war on Ukraine. He warned them to use the money to expand oil supplies or return it to consumers in the form of price reductions.

“If they don’t, they’re going to pay a higher tax on their excess profits and face other restrictions,” Mr. Biden told reporters at the White House. “My team will work with Congress to look at these options that are available to us and others. It’s time for these companies to stop war profiteering, meet their responsibilities to this country, give the American people a break and still do very well.”

The president’s embrace of new taxes on the energy industry heartened liberals in his party who have been urging him to take action for months. But it was more of a way to pressure the oil firms than a realistic policy prescription for the short term given that Congress is not even in session and would be even less likely to approve such a measure if Republicans capture one or both houses in next week’s election.

Mr. Biden has been eager to redirect public anger over gas prices toward the oil industry and away from himself as Democrats try to overcome historical and popular headwinds to keep power on Capitol Hill. While the price at the pump has fallen significantly since topping out just above $5 a gallon in the summer, it is still much higher than when Mr. Biden took office and contributes to the overall inflation rate, which remains near a four-decade high.

The president framed his case against the oil companies in terms that seemed clearly aimed at next week’s vote. “The American people are going to judge who is standing with them and who is only looking out for their own bottom line,” he said. “I know where I stand.”

Republicans fired back at the president, faulting him for policies that they say discourage the energy industry from expanding capacity.

The oil industry accused the president of politicking, noting that gas prices have come down by roughly a quarter since summer. “Rather than taking credit for price declines and shifting blame for price increases,” said Mike Sommers, the president of the American Petroleum Institute, a trade group, “the Biden administration should get serious about addressing the supply-and-demand imbalance that has caused higher gas prices and created long-term energy challenges.”

Mr. Biden’s statement came just days after the oil giants reported another three months of flush coffers. Exxon Mobil brought in a record of nearly $20 billion in profits for the third quarter of the year, 10 percent higher than the previous quarter and its fourth consecutive quarter of robust earnings. Chevron reported $11.2 billion in profits, just below the record it set the quarter before. The European-based Shell and Total Energies companies similarly reported that profits more than doubled from the same period a year ago.

The five biggest oil companies generated more than $50 billion in profits in the second quarter, and the International Energy Agency has reported that total net income for the world’s oil and gas producers will double this year from last to a record $4 trillion. “Today’s high fossil fuel prices have generated an unprecedented windfall for producers,” the agency said.

A half-dozen of the largest firms earned more in profit over the past six months than in all of last year and more than two and a half times what they earned in the same quarters of 2021, White House officials said. Mr. Biden said if the industry simply earned the same level of profits it has for 20 years, consumers would pay 50 cents less per gallon.

The firms have used their profits in some cases for dividend increases and stock buybacks rather than increased production, which could bring down the price of oil and therefore trim their profits. Exxon Mobil raised its dividend on Friday, citing a commitment to “return excess cash” to shareholders.

Mr. Biden has been sensitive to gas prices, an important barometer for the public mood. As the price at the pump hit record highs over the summer, the president’s approval rating slid to new lows, but as gas costs came down over the following three months, his own numbers improved. Likewise, according to polls, the rise and fall of gas prices is directly inverse to public feelings about whether the country is heading down the right or wrong track.

Ron Klain, the White House chief of staff, is so attentive to the fluctuations that he checks the average price every day and often posts messages on Twitter pointing out when it dips further.

“If you are filling your gas tank this weekend, you are seeing one of the cheapest Saturdays of the year,” Mr. Klain tweeted on Saturday. “Gas prices continue to drop nationally,” he added on Monday morning.

The current national average of $3.76 a gallon is about three pennies less than it was a month ago and about $1.25 below the June peak, but still far above the $2.39 it was when Mr. Biden took office, according to AAA.

The issue flared recently when Saudi Arabia led the OPEC Plus cartel to cut production by up to two million barrels of oil a day just before the midterm elections, a move that Biden administration officials considered a betrayal of a private understanding to increase supplies rather than the other way around.

A windfall profits tax would impose an excise levy on the output of domestic oil producers. Congress would establish the tax rate, which could differ between independent producers and the biggest companies. It would be the first windfall profits tax in the United States in more than three decades, but since earlier this year, 15 European countries have proposed or enacted such levies, including Britain, Italy and Spain, according to the Tax Foundation.

Urged by President Jimmy Carter, Congress imposed a windfall profits tax in 1980 after a sharp increase in oil prices spurred by an OPEC embargo. Lawmakers were trying to offset large industry tax deductions, including a depletion allowance for older wells with exhausting deposits and an array of deductions for drilling.

But domestic production fell and dependence on foreign oil increased, while forecasts of revenue from the windfall tax turned out to be overly optimistic. Congress repealed the tax in 1988 after oil prices fell.

Industry executives said Mr. Biden’s proposal to revive the tax would not increase supplies. “It’s a horrible idea, small thinking,” said Patrick Montalban, the president of Montalban Oil and Gas, a producer in North Dakota and Montana. “It’s going to take away from exploration and production of domestic oil and gas. It’s that simple. Total politics.”

Democrats who have pressed Mr. Biden to consider such a tax applauded his statement. “It’s time for Congress to stand up to Big Oil and bring relief to consumers, instead of corporate stock buybacks and bonuses,” said Senator Sheldon Whitehouse of Rhode Island, who has introduced windfall profits tax legislation.

But some liberals were unhappy that Mr. Biden was using the threat to leverage production increases. “Drilling more won’t lower prices for U.S. consumers,” said Robert Weissman, the president of Public Citizen, an advocacy group. “More investment in oil drilling will deepen our dependence on fossil fuels.”

Investments in oil and gas exploration remain 17 percent below the 2019 level and half the level in 2014, when the oil business was enjoying a price boom, according to the International Energy Agency. Few new fields have been discovered in recent years, leading to ever-tightening supplies. And Wall Street has shied away from investing in hydrocarbons because of growing concerns about climate change.

American oil production this year is averaging 11.87 million barrels a day, an increase of 4 percent from last year despite urging from the administration that companies drill and produce more. The number of rigs deploying has been increasing this year, although increases have slowed since summer.

Shale oil production, which has been the engine of growth over the last decade, is expected to grow to roughly the level before the Covid-19 pandemic caused the 2020 economic downturn and collapse of oil prices.

Peter Baker reported from Washington, and Clifford Krauss from Houston.

Peter Baker is the chief White House correspondent and has covered the last five presidents for The Times and The Washington Post. He is the author of seven books, most recently “The Divider: Trump in the White House, 2017-2021,” with Susan Glasser. @peterbakernyt • Facebook

Clifford Krauss is a national business correspondent based in Houston, covering energy. He has spent much of his career covering foreign affairs and was a winner of the Overseas Press Club Award for international environmental reporting in 2021. @ckrausss

Image Credits: President Biden lashed out against the major gas and oil companies on Monday as several of them reported another surge in profits. Credit…Tom Brenner for The New York Times