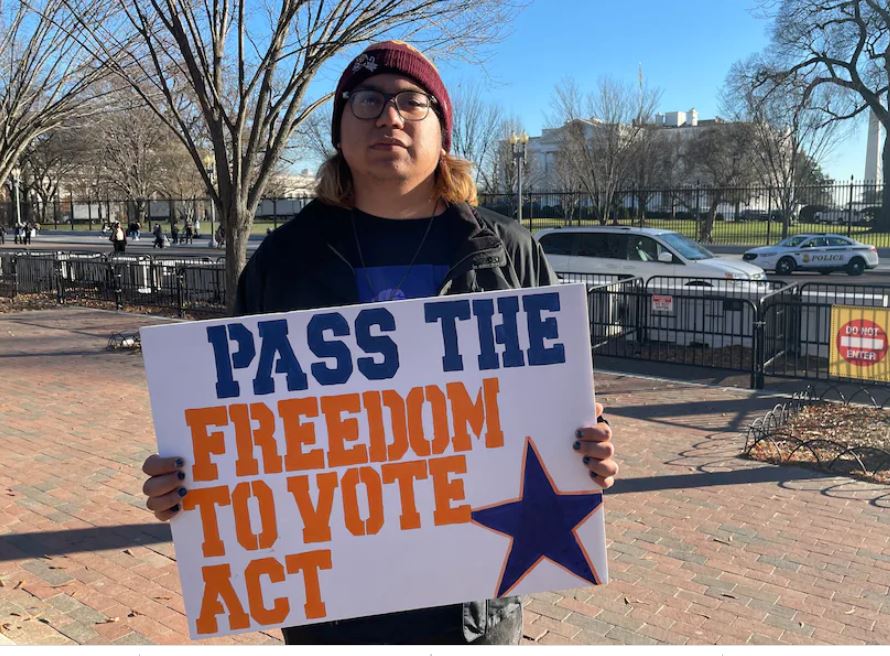 President Biden’s impassioned rhetoric on Friday about securing voting rights collided once again with the realities of the Democrats’ limited options to turn words into action. Democrats end the year in an even worse place than when the year began amid the barest signs of progress.

Biden’s address Friday at South Carolina State University was not the first time this year he has spoken out on the issue of voting rights. At a news conference in March, he called Republican efforts to restrict voting rights “un-American” and “sick.” In a speech in July, he called the battle over voting rights “the most significant test of our democracy since the Civil War” and described Republican efforts in the states as “raw and sustained election subversion.”

Biden returned to those themes Friday. “This new sinister combination of voter suppression and election subversion, it’s un-American, it’s undemocratic and, sadly, it is unprecedented since Reconstruction,” he told graduates of the historically Black university at their commencement.

Republicans have routinely denounced Biden’s rhetoric about voting rights, particularly his characterization that what is taking place in some states is “Jim Crow 2.0.” At the same time, Republicans have consistently opposed efforts in the Senate even to begin debate on Democratic-sponsored legislation aimed at expanding voting rights.

The year began with H.R. 1, a sprawling voting rights bill that was passed by the House in March. It arrived in the Senate to some fanfare but immediately ran into a Republican roadblock. Senate Minority Leader Mitch McConnell (R-Ky.) was among the most vociferous opponents, calling the bill “an election takeover scheme” by the federal government and by implication the Democrats.

Republicans did more than oppose it, however. With Democrats needing 60 votes to move the bill forward, GOP senators voted not to allow the bill to come to the floor for debate and amendment. By year’s end, Republicans had three times prevented debate on the comprehensive bill or on a compromise version that had been engineered by Sen. Joe Manchin III (D-W.Va.). Manchin’s bill was designed to address criticisms that H.R. 1 was too sweeping and too prescriptive.

Last month, Republicans blocked another bill, named for the late House member and civil rights legend John Lewis (D-Ga.). This legislation is intended to restore a key portion of the Voting Rights Act that was neutered by the Supreme Court in 2013. In 2006, the Senate voted 98-to-zero to reauthorize the act for another 25 years. Today, Republicans will not allow a measure to restore a critical section of the act, requiring preclearance of election changes in some jurisdictions, to come to the floor.

In the states, Republican-controlled legislatures have passed measures to restrict voting rights. There is room for debate about how onerous some provisions in some of the bills are, but the motivation of the Republicans is clear. Republicans supporting these bills believe that changes in voting procedures in the pandemic year of 2020, which made it easier for people to vote (universal mail ballots as an example) solely benefited the Democrats. They seek to roll them back wherever possible.

Their rationale often has been that their newly enacted laws are designed to prevent fraud or to assure election integrity, yet there was no widespread fraud in the 2020 election to which they can point. At heart, the debate is over the question of whether voting laws should make it easier or more difficult for people to vote, whether they should protect the right of all to vote or frustrate that right for some groups.

Former president Donald Trump has fueled efforts in the states to restrict voting with calls for election audits, claiming falsely that they will show that there were widespread irregularities, enough to overturn the results of the 2020 presidential vote. The former president’s lies about a stolen election have found a receptive audience in some corners of his party.

At the behest of Republicans in the Arizona state Senate, an outside firm spent months reviewing ballots in Maricopa County and produced a report that said the 2020 election results had been accurately counted. In Wisconsin, as my colleagues Rosalind S. Helderman and Josh Dawsey reported this past week, a number of questionable reviews are underway that are leading to legal standoffs and more acrimony.

Another movement in some states is more onerous. These are efforts to make it easier to turn over the administration of elections to partisan politicians rather than what have traditionally been nonpartisan administrators. Some laws call for criminal penalties for local election officials for what could seem to be minor mistakes. In some places, local election officials have been intimidated. In other places, Trump loyalists who share his views about a rigged election are seeking positions on election boards, prompting fears about the certification of future elections.

In the House, the committee investigating the Jan. 6 attack on the U.S. Capitol continues to dig into who knew what and when about the events of that day and the days before. Coupled with reporting in books about the election and recent reporting by news organizations, the outlines of the effort to subvert the 2020 election by disrupting the House ratification of the electoral college vote have become clearer.

There is more to learn about what happened as a precursor to the coming elections in 2022 and 2024 and more concerted efforts to disrupt certification. Even McConnell now seems to agree that this investigation is vital. In an interview he gave to Spectrum News, he said: “I think the fact-finding is interesting. We’re all going to be watching it. It was a horrendous event, and I think what they’re seeking to find out is something the public needs to know.”

This is the same McConnell who opposed the creation of an independent, bipartisan commission to investigate the attacks of Jan. 6, but who, notably, is on the receiving end of ceaseless attacks by the former president.

Meanwhile, Democrats appear stuck on what to do about a voting rights bill. Absent support from Republicans, they are left to try to act on their own, and the numbers don’t add up. In a 50-50 Senate — one that includes at least two Democrats, Manchin and Sen. Kyrsten Sinema (D-Ariz.), who continue to oppose any change in the filibuster rules — there is no way to break the logjam.

With Biden’s Build Back Better legislation still in negotiation, some Democrats have called for voting rights legislation to take precedence, among them Sen. Raphael G. Warnock (D-Ga.). But the filibuster problem still looms.

Biden, long opposed to doing away with the filibuster, said in October he is open to looking at some changes in the rules to allow the voting rights measure to pass. Other Democrats who have been resistant to getting rid of the filibuster have recently expressed support for some kind of carve-out for a voting rights bill.

One of the latest to call for change is Sen. John Hickenlooper (D-Colo.). Noting that a modification in the filibuster procedure was made to allow the debt ceiling to be raised, he said in a statement Wednesday: “Voter disenfranchisement threatens our entire democracy. If we can change the process on the debt ceiling, then surely we can do the same to protect our democracy.”

Hickenlooper, in a phone interview on Friday, argued that “all your other rights are dependent on your right to vote.” He said he sees several foundational elements to expand voting rights, including voting by mail, two weeks of early voting and post-election analysis to verify the accuracy of the vote. “That stuff is pretty basic,” he said. “We can’t even get Republicans to support that. I think that’s going to push Democrats (to consider changing the filibuster rule).”

Biden said Friday that he has “never seen anything like the unrelenting assault on the right to vote” he sees now. He has pledged to keep pushing for the passage of the bills stalled in the Senate and reportedly continues quiet conversations with senators. There is movement among Democrats in the Senate on the filibuster, but it has been slow and still faces seemingly immovable colleagues. Until that changes, presidential rhetoric and the possibility of a more vigorous backlash against Republican resistance will remain the Democrats’ primary weapons in the battle.