Call it Codger Power. We’re older and fighting for a better America. 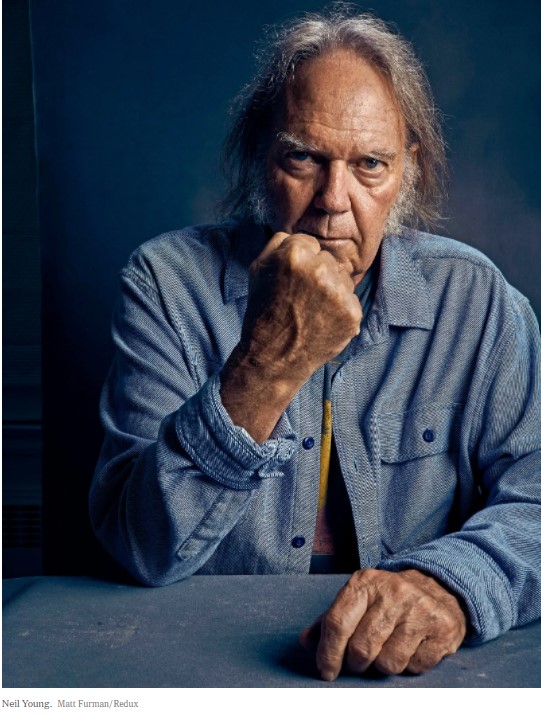 Neil Young and Joni Mitchell did more than go after Spotify for spreading Covid disinformation recently. They also, inadvertently, signaled what could turn out to be an extraordinarily important revival: of an older generation fully rejoining the fight for a working future.

You could call it (with a wink!) codger power.

We’ve seen this close up: Over the past few months, we’ve worked with others of our generation to start the group Third Act, which organizes people over the age of 60 for progressive change. That’s no easy task. The baby boomers and the Silent Generation before them make up a huge share of the population — nearly 75 million people, a larger population than France’s. And conventional wisdom (and a certain amount of data) holds that people become more conservative as they age, perhaps because they have more to protect.

But as those musicians reminded us, these are no normal generations. We’re both in our 60s; in the 1960s and ’70s, our generation either bore witness to or participated in truly profound cultural, social and political transformations. Think of Neil Young singing “four dead in Ohio” in the weeks after Kent State or Joni Mitchell singing “they paved paradise” after the first Earth Day. Perhaps we thought we’d won those fights. But now we emerge into older age with skills, resources, grandchildren — and a growing fear that we’re about to leave the world a worse place than we found it. So some of us are more than ready to turn things around.

It’s not that there aren’t plenty of older Americans involved in the business of politics: We’ve perhaps never had more aged people in positions of power, with most of the highest offices in the nation occupied by septuagenarians and up, yet even with all their skills, they can’t get anything done because of the country’s political divisions.

But the daily business of politics — the inside game — is very different from the sort of political movements that helped change the world in the ’60s. Those we traditionally leave to the young, and indeed at the moment it’s young people who are making most of the difference, from the new civil rights movement exemplified by Black Lives Matter to the teenage ranks of the climate strikers. But we can’t assign tasks this large to high school students as extra homework; that’s neither fair nor practical.

Instead, we need older people returning to the movement politics they helped invent. It’s true that the effort to embarrass Spotify over its contributions to the stupidification of our body politic hasn’t managed yet to make it change its policies yet. But the users of that streaming service skew young: Slightly more than half are below the age of 35, and just under a fifth are 55 or older.

Other important pressure points may play out differently. One of Third Act’s first campaigns, for instance, aims to take on the biggest banks in America for their continued funding of the fossil fuel industry even as the global temperature keeps climbing. Chase, Citi, Bank of America and Wells Fargo might want to take note, because (fairly or not) 70 percent of the country’s financial assets are in the hands of boomers and the Silent Generation, compared to just about 5 percent for millennials.

Awakened older Americans could push hard on these banks. Not every older person is financially comfortable — which puts the onus on those of us who are — but we’ve heard from thousands of people who do not want their life savings used to undermine the life chances of their children.

Or think about the equally crucial fight to protect democracy. Older Americans vote in huge numbers; they were 44 percent of the electorate in 2020, with boomers closely divided on their presidential choice and those over 75 clearly favoring Donald Trump. Many older Americans still tended to support the candidates and party backing voter suppression — but Joe Biden narrowed those margins. Older Americans must be reminded that we witnessed the passage of the Voting Rights Act in 1965, perhaps the most American thing that Congress has done in our lifetime. That’s why we’re assembling what we call a Democracy Force of older volunteers to make the phone calls and write the letters to potential voters around the country (and yes, it’s worth remembering that older Americans have more time at their disposal).

Reminding one another of the early years of our lives is, we think, key. If our first act was pretty fascinating, the second act for too many of our generations focused harder on consumerism than on citizenship; we drifted into an individualism that fit easily with the Reagan ethos of looking out for oneself. But if it worked for us, it clearly isn’t working for the planet or the society as a whole — younger people realized that, which is why they took up the “OK, boomer,” cry, and we’ve begun to realize it too. Older voters began drifting back to Mr. Biden in the last election, but we think that drift needs to grow into a wave if we’re going to defuse the challenges facing us.

And it can. Plenty of people don’t take older Americans seriously as political actors. If you read Twitter in the wake of the Spotify kerfuffle, there were lots of comments about “has-been artists” and “geezers.” We prefer “experienced Americans,” but if you want to talk about codger power, then so be it (and by the way, don’t dis our music — people on music services are mostly streaming old tunes). Since we’ve begun organizing Third Act, it’s been amazing to watch people come in out of the cold to help, people like Sam Brown, who in 1969 helped organize the vast Vietnam Moratorium Day, which drew millions into the streets, and now is helping run the campaign challenging banks on climate change.

“Back then those vast demonstrations started with just a few people,” he said at our national virtual teach-in last month. “We’ve just got to believe we can do what we need to do — and if we believe it enough, we probably can.”

What really should scare the corporate and political bad actors is the prospect of old and young people connecting, because there is real power if we work across generations. Last fall, young activists called for demonstrations outside the fossil-friendly big banks, and they invited us to join in. We did, with a certain amount of gallows humor (“Fossils against fossil fuels” read one banner in Boston). And by the end of this week, younger artists were joining in the Spotify boycott. The soul singer India Arie and the podcaster Roxane Gay, both 40-somethings, had pulled their work, too.

This particular dust-up won’t be a decisive battle in the struggle for a better America and a better planet; in fact, there may not be any decisive battles, just a long series of skirmishes that must be engaged by the young but also by the old. We may be nearer the exit than the entrance, but we’re in this fight for the long haul.

Bill McKibben, the founder of the new progressive group Third Act, also helped found the climate advocacy group 350.org and is the author of the forthcoming book “The Flag, the Cross, and the Station Wagon: A Graying American Looks Back at His Suburban Boyhood and Wonders What the Hell Happened.” Akaya Windwood is the lead adviser of Third Act and a co-author of the forthcoming book “Leading With Joy.”