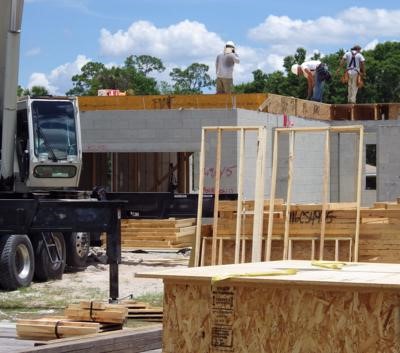 After several motions and amendments that didn’t pass, Charlotte County commissioners voted 4-1 Tuesday to adopt a new impact fee that will set the cost for a single-family home at $5,660. It goes into effect in 90 days.

The rate remains lower than neighboring coastal counties and municipalities.

Single-family homes account for the vast majority of new construction projects in the county. The fees raise millions of dollars used on capital projects including roads, libraries, parks and fire stations.

For Charlotte County, however, this new increase will now apply only to transportation costs, including roads and walkways.

In the end, two commissioners were disappointed the fees are not higher and a commissioner capitulated to go above what he had wanted.

Commissioners have been fighting each other as well as new state legislation that restrains local government from large impact fee increases. The county sidestepped that new law this year by declaring emergency circumstances in the form of a development explosion.

Without any increase in impact fees, the county would face a $65 million shortfall in funds to pay for planned road and sidewalk projects, Budget Director Gordon Burger told commissioners.

That shortfall is anticipated even with the contribution of the local penny sales tax.

Commissioner Ken Doherty opened the bidding, proposing a fee of $5,500. He said he would not go above that due to the current inflationary economy.

Commissioner Stephen R. Deutsch amended that to $5,660 and Commissioner Joe Tiseo amended it again to $6,289. Tiseo’s figure was defeated 2-3 with Doherty, Deutsch and Chairman Bill Truex voting against. Impact fee changes now require a super majority, in this case, a 4-1 vote.

Doherty compromised and voted in favor of the new figure of $5,660.

Commissioner Chris Constance held out with a no vote. He has objected to the county keeping its fees lower than surrounding coastal counties.

With all project areas funded at 100% of recommended rates, the maximum fee would have been $9,789 for a single-family home. That is according to a consultant’s report that calculated the impact of all forms of development.

Arguing in favor of a higher fee, Tiseo said fees do not deter development.

“We’re in a perpetual state of construction,” he said. “We’ve been discovered. The jig is up. We’re the best waterfront value in the state.”

Truex pointed out that the homeowner ultimately pays the added fee, and the county is trying to keep housing affordable.

Before the vote, residents spoke in favor of raising the fee.

Resident Richard Russell, who worked formerly in commercial development, said local taxpayers should not have to pay for community improvements needed by for-profit builders.

“If we don’t charge the full value, that becomes a subsidy,” Leonard Guckenheimer said.

Suzanne Graham, representing the Charlotte DeSoto Building Industry Association, repeated that group’s opposition to impact fees. She pointed out the many local structures built before impact fees were introduced in the 1980s.

“There are a lot of homes and businesses that never paid impact fees,” she said. “We need to look at those people as well.”