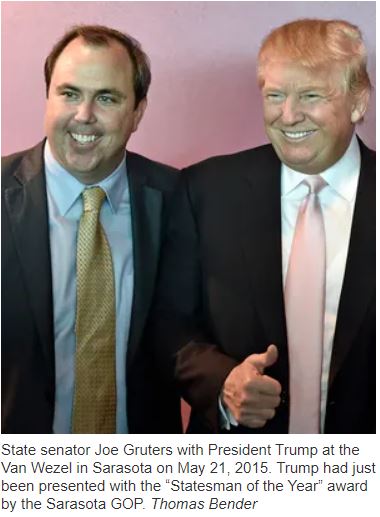 When Donald Trump boarded Air Force One Wednesday morning and headed to his estate in Palm Beach, it marked the end of his presidency and the beginning of Florida’s new role as the stage for Trump’s post-presidential drama.

Trump departed the White House beset by scandal and defeat, impeached a second time and seemingly oblivious or indifferent to the wreckage caused by his actions. He is at a low point, with two-thirds of the country disapproving of his performance after he spent two months making unsubstantiated election fraud claims that culminated in a rally on Jan. 6 that led to a mob overrunning the U.S. Capitol. Five people, including a Capitol Police officer, died as a result.

Florida has long been known as sunny place to retreat, regroup and reinvent. Now it’s the place where a man who rose to the highest office in the land before becoming the first one-term president in nearly three decades will try to rehabilitate his image and regrow his political clout, which was diminished by the riot but still is considerable within the GOP.

There is discussion of a possible Trump presidential library in Florida, his daughter Ivanka running for public office in the state and the 45th president using Florida as a launching pad for his own political comeback and new business ventures, such as a media company.

In many ways Florida is the perfect place for Trump to start over. It is friendly territory, a state loaded with his political allies, from top elected officeholders to prominent figures in conservative media and the business community.

Florida GOP Chair Joe Gruters, an ardent Trump supporter who co-chaired his 2016 campaign in the state, greeted the president’s arrival Wednesday with a Facebook post extolling his record in office.

Trump’s top allies in Florida include Gov. Ron DeSantis and U.S. Rep. Matt Gaetz – maybe the most Trump-loving governor and Trump-loving congressman in the country – and U.S. Sen. Rick Scott, who voted not to certify a portion of Joe Biden’s Electoral College votes, along with media personalities such as Rush Limbaugh and Ann Coulter.

But Trump’s influence extends throughout the Florida GOP, from Congress to the state Legislature and local leaders.

Florida state Rep. Anthony Sabatini this week proposed renaming a road that runs from Miami to Tallahassee the President Donald J. Trump Highway, saying he will file a renaming bill for the legislative session that begins in March.

“Looking forward to working on this important designation honoring one of the greatest Presidents in American History,” Sabatini wrote on Twitter.

Florida also is a place where Trump is still popular with many voters. He won Florida in 2020 by triple the margin that he did in 2016, maintaining his support among white working class voters and expanding it among Hispanics.

Trump’s adult children appear likely to follow him to Florida, with Ivanka and her husband, Jared Kushner, recently buying property in the state and Donald Trump Jr. and Tiffany Trump reportedly shopping for homes.

“This is the logical place for them to come,” Wilson said of Trump and his family.

The Trump family decamping to Florida will further solidify the state as the new epicenter of MAGA (Make America Great Again) World and – to a great extent – GOP politics in general.

Even with his stature diminished by the riot, Trump is still the biggest name in the GOP and the party’s leading voice.

Having the former president in Florida helps make the state a focal point for the entire ecosystem of GOP leaders, consultants, media and fundraising. Florida’s status as the biggest swing state to buck the national trend and stay red in 2020 makes it a more welcoming environment for GOP activism.

Beyond the state’s ongoing role in national politics, the presence of Trump and his family in Florida also could have a big impact on state politics.

There is speculation that Ivanka could challenge U.S. Sen. Marco Rubio for his seat in 2022. DeSantis also will be up for reelection then, and Gaetz is dropping hints that he could run for agriculture commissioner, a potential stepping stone to running for governor or the U.S. Senate.

There is the possibility that Florida could become even more dominated by MAGA stars at the top level of state politics, especially with Trump looming over the Florida GOP.

“The political party and the candidates who are going to want to run, they’re going to be assessing what contribution that Trump can make,” said Florida Gulf Coast University political science professor Peter Bergerson. “Trump, if he’s smart, will pick and choose those candidates to endorse and campaign for who will add to his rehabilitation, so to say.”

Bergerson expects Trump to use his Mar-a-Lago estate “as a source to wine and dine and rebuild some degree of credibility within the party here in Florida.”

If Trump is able to avoid conviction in his Senate impeachment trial, he could even use Florida as a base to make a political comeback and run for president again in 2024.

“Let’s just state a political fact: If Donald Trump wants the Republican nomination in 2024 it will be handed to him on a silver platter. I’ll support him and I think the field will be mostly clear but for some people that have ambition that outsizes their political sense because with our base, with Trump voters, I think the president is as strong as he’s ever been,” Gaetz said in a recent Fox News interview.

Whether Trump mounts another run for president or not, Bergerson believes he will use his political involvement to help his financial situation. The riot at the Capitol has further damaged Trump’s brand and could force him to spend much of the early part of his post-presidency in Florida trying to stabilize his finances.