Happy Labor Day! But not for everybody 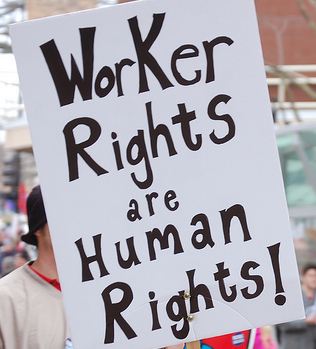 Many American employees have nothing to celebrate this Labor Day.  They are the hourly, low-wage workers that makeup almost 50% of the American workforce. While the unemployment rate had been low at 3.5%, there was a caveat:  63% of all new pre-pandemic jobs were low-wage, low-hour jobs; with no benefits. These workers are disproportionately Black and Brown and female. And they have suffered the worst because of this Administration’s pathetic response to the pandemic.

Meet Alisha from Englewood. She is a 32-year-old divorced Black mother of two school-age children. She is a cashier for 25-30 hours a week earning $9.87/hour, slightly higher than the local prevailing wage for her job. Pre-pandemic, she also worked as a server, where she made about $100/ week in addition. She would like to work more hours, but the available extra hours are nights and weekends when accessing childcare is challenging – even before the pandemic made it impossible. Her total monthly income was around $1,600; now it’s just over $1,200.

Her $900/month rent is well over 50% of her income, which is true of 25% of tenants in the US. Her rent is a comparative bargain for the area; 25% below the Charlotte County average. She lives paycheck to paycheck, as does half of America. After she was laid off from her server job, she applied for food stamps, a program keeping hunger at bay for millions of Americans but facing cuts by the current administration. She is extraordinarily adept at managing with what she has but says occasionally she has used a payday lender, due to an emergency, usually repairs for her old car. She knows people who use payday advances every two weeks  (with annualized interest rates of 400%+) and never get out of debt. Or run up credit cards and pay off interest forever.

She does not work enough hours to qualify for employer-based health insurance, although she would love to. She has never had a job with benefits.  If Florida had expanded Medicaid under the Affordable Care Act, she would have health coverage. Fortunately, her girls are covered under Florida KidCare. She has not seen the doctor since the birth of her daughter. She has never seen a dentist. Her glasses are about 10 years old. She works when she’s sick because she can’t afford not to.

Her supermarket job is essential, which she deems “a blessing and a curse”. Until the end of July, when the Charlotte Board of County Commissioners finally passed a resolution to strongly encourage indoor mask-wearing, Alisha reported having to deal with demeaning and dangerous behavior.  She has been sworn and yelled at and purposely coughed upon.  She has friends who were receiving $875/week on unemployment until the expiration of the federal $600/week, but said no-one she knew turned down work because they know that eventually unemployment benefits end and jobs will be scarce. The unemployment rate in Charlotte County in July was 10.0%, up slightly since June.  One of her friends served at two local restaurants and has had no hours since the shutdown and has not been able to get any unemployment benefits.

Since the schools closed, Alisha’s brother, who was enrolled at FGCU, has moved in and been tutor/babysitter while trying to complete his own virtual classes. Pre-pandemic, she and a friend took turns providing after-school care for their combined three kids. She told me that almost everyone she knows is experiencing childcare problems. The girls will attend school full time when it opens on August 31. She is worried about coronavirus but has no choice but to send them. It’s either that or quit her job.

Her plans for Labor Day? She will be working. She will not be paid overtime. She has never had a paid day off.

Let’s face the shameful truth – 50% of American workers have not had much to celebrate on past Labor Days or any other holiday for that matter.  Low-wage, hourly workers either lose a day’s pay or work for their regular pay. No time and a half for them. Electing Biden/Harris means a  $15 minimum wage;  paid leave; assistance with childcare costs; and expanded access to healthcare. Vote Biden/Harris for Alisha’s sake. And support a local food pantry.