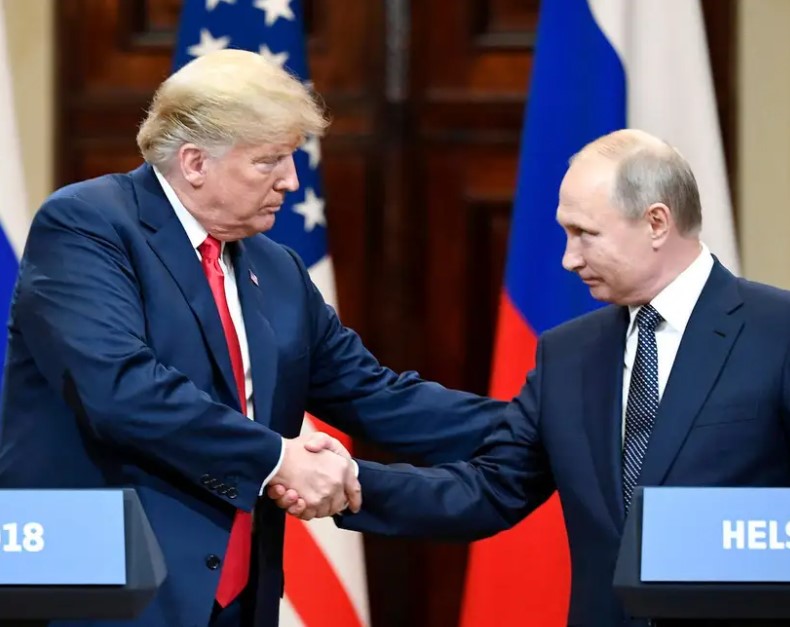 The former presidential adviser and Russia expert Fiona Hill made headlines last week when she stated bluntly in a Politico interview that Vladimir Putin would not hesitate to use nuclear weapons.

But it was another part of that long interview that I found almost as arresting. Hill described how Putin, as he reaches for domination, relies heavily on his skills at the influence-and-information game.

“What happens in a Russian ‘all-of-society’ war, you soften up the enemy,” she told her interviewer, Maura Reynolds. Hill named some names: “You get the Tucker Carlsons and Donald Trumps doing your job for you.”

And now, after a few years of their apologetic rhetoric on behalf of Russia, Putin “has got swaths of the Republican Party” and “masses of the U.S. public saying, ‘Good on you, Vladimir Putin,’ or blaming NATO, or blaming the U.S.” for Russia’s invasion of Ukraine, she added.

It was quite an indictment from a well-respected intelligence officer, who worked in both Republican and Democratic administrations. She became known to the American public for her unsparing analysis when she testified during Trump’s first impeachment hearings.

But while it’s startling to hear it said so directly — a Fiona Hill specialty — the proof is there for anyone to see.

In addition to the many times that Trump has praised Putin as strong and admirable, while failing to criticize his human rights offenses, our previous president helped the Russian cause in more specific ways. He reportedly argued to fellow world leaders in 2018 that Crimea — the Ukrainian peninsula that Russia invaded and annexed in 2014 — was Russian because, after all, people who live there speak Russian.

Carlson, meanwhile, recently wondered on air why Putin is hated by “permanent Washington,” describing Ukraine as “not a democracy” but a “pure client state of the United States State Department.”

In more recent days, Carlson has changed his tune to oppose Putin — while managing to fault Democrats as not sending a clear message about the impending crisis. But, to a large extent, the propaganda mission had already been accomplished. In 2019, Carlson had even asked on the air, “Why shouldn’t I root for Russia, which by the way I am?” (He tried to walk that comment back after it went viral, saying he was only kidding.)

Do these pro-Putin messages sink in? No doubt they do, here in the United States and in Russia itself.

Rep. Tom Malinowski (D-N.J.) said that in the run-up to the invasion, his office heard complaints from constituents who watch Carlson and “are upset that we’re not siding with Russia in its threats to invade Ukraine, and who want me to support Russia’s ‘reasonable’ positions.”

That Russian state TV has repeatedly played clips of Carlson’s rants, complete with Russian subtitles, is a tribute to just how well-received his rhetoric has been by Putin and his allies.

Laura Ingraham’s show was a big help late last month as she trashed a speech by Ukrainian President Volodymyr Zelensky as “really pathetic” and brought Trump on as a guest. The former president’s analysis: His strongman idol would merely have taken over two regions in eastern Ukraine but went further because “he sees the weakness and the incompetence and the stupidity” of the Biden administration.

The circularity and symbiosis of right-wing media and Russia’s own talking points can be quite remarkable.

On Tuesday, former Trump-era assistant treasury secretary Monica Crowley told Fox News’s Jesse Watters that economic sanctions were so severe that “Russia is now being canceled.” Within days, we heard about Russian Foreign Intelligence Director Sergei Naryshkin using the same cancel-culture rhetoric. “The West isn’t simply trying to close off Russia behind a new iron curtain. This is about an attempt to ruin our government — to ‘cancel’ it, as they now say in ‘tolerant’ liberal-fascist circles,” Naryshkin said.

How serious is Putin’s effort to control information? Russian American journalist Masha Gessen noted in the New Yorker last week that the Russian military banned the possession of smartphones by soldiers last year. Russia, they wrote, has become “an atomized society held together by a hermetically sealed ideology.”

Efforts to keep that hermetic seal are getting more desperate. Late last week, Russia’s parliament passed a law to punish journalists who contradict the party line on Ukraine, banning the words “war,” “invasion” and “attacks.” It’s now a criminal offense — with jail terms up to 15 years — to publish “fake news,” a term popularized by a certain Putin-friendly former American president.

As he tries to deal with ugly truth — images leaking out of Ukraine showing the destruction of civilian neighborhoods — Putin is relying on uglier lies, trying to insist that his military is doing everything it can to avoid civilian deaths.

He severely limits truthful information inside Russia and uses politically friendly Americans — and their media magnifiers — to plant propaganda and lead cheers in the West.

In the age of real-time video and the relentless presence of social media, controlling the message has become more challenging for Putin. As the estimable Fiona Hill argues, he’s trying to do nothing less than take down the world order and reconstitute the Russian-speaking world as one entity.

That’s an ambitious plan. But at least his trusty American apologists laid some groundwork for him.

Facebook
Twitter
Email
PrevPreviousFlorida editorials: Scott-Rubio tax plan is “un-American” and “absurd”
NextBiden can hope the worst is behind himNext