The Trümperdämmerung Is a Fitting End to 2020 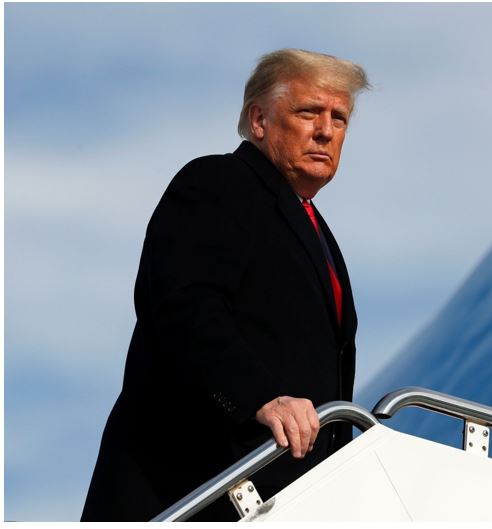 As the awful year of 2020 and the awful tenure of Donald Trump both come to an end, the President has partied with the unmasked in Palm Beach and taken credit for a vaccine against a virus that he once counselled could be beaten with bleach. He has pardoned mercenary child-killers and Paul Manafort. He has golfed. He has raged. He has vetoed the annual defense bill and threatened to shut down the government over the holidays. He has turned against even some of his most loyal henchmen, and some, in turn, have finally flipped on him. “Mr. President . . . STOP THE INSANITY,” the New York Post blared on Monday, after four years of relentless cheerleading.

But, of course, the President did not, and he will not. He continues to refuse to accept his defeat in the election, and just the other day he retweeted a claim that “treason” kept him from winning. Injecting still more political drama into the most ministerial of constitutional processes, Trump and his most fanatical supporters now want Congress to refuse to confirm Joe Biden’s Electoral College win on January 6th—which is both pointless, in that it will not happen, and incredibly destructive. Meanwhile, more than a hundred thousand Americans have died of the coronavirus just since the election, and only two million Americans—not the hundred million he once promised—have so far received the vaccine.

The Trümperdämmerung is finally here, and it is every bit the raging dumpster fire that we, the unlucky audience for this drama, have come to expect. Is there anyone left who is surprised that the President is careening through the last days of his Administration with a reckless disdain that simply has no precedent in American public life? Still, the hardest thing to accept is that 2020 is not merely the year that Donald Trump’s luck ran out but that with it the country’s did, too. Sadly and yet inevitably, this terrible, wretchedly toxic year of pandemic death and economic distress, of partisan hatred and national protest, is the culmination of all that Trump has wrought and all that he is.

Now that 2020 is finally almost over, I find that I don’t want to remember it at all. Perhaps this is simply because Trump has remained so defiantly and obnoxiously unrepentant, continuing his antics all the way to the end. He does not want to let go, to cede the spotlight, to renounce his outsized claim on our collective consciousness. It is my protest, our protest, to want so desperately to do so.

As it is, we are still in 2020, and I can barely summon the concerns and controversies of a year ago, when the most pressing political question in Washington was whether Trump’s former national-security adviser John Bolton would have to testify in the impeachment trial of the President. (Spoiler alert: he didn’t, though he would eventually call Trump unfit for office in a book whose contents he did not share with the United States Senate and the American public when it mattered most.) Now that the election and all the other mayhem associated with it have happened, it’s hard to recall that 2020 began with me wondering whether Biden still had a chance in the upcoming Democratic primaries, and pondering why the promising Presidential campaign of Kamala Harris had flamed out so quickly, before a single vote was cast. This was back when Trumpian outrages seemed less threatening to the literal health of the nation.

How much worse was 2020? Well, NBC’s list of the President’s ten biggest lies in 2019 included Trump perennials like the idea that windmills, because of their noise, “cause cancer,” and “people are flushing toilets ten times, fifteen times,” and the U.S. will “be going to Mars very soon.” All are bad, absurd, and embarrassing coming from a President, but would not even rate in this year’s far deadlier, more consequential tally. Trump was not just a circus this year; he was an actual catastrophe.

Which is why the before times are so hard to conjure now, nine months into the pandemic and nearly two months after an election whose aftermath has challenged the very foundation of American democracy. I can remember, sort of, Nancy Pelosi ripping up Trump’s State of the Union speech, and the drama of Mitt Romney becoming the only senator in history to vote to convict an impeached President of his own party. I can recall, sort of, the anxiety that followed the U.S. assassination of the Iranian Revolutionary Guard leader Qassem Suleimani, and the drama of Biden’s remarkable comeback in the Democratic Presidential race.

In reality, though, the year really began for me, for us, in February—on February 24th, to be precise, when Trump tweeted, “The coronavirus is very much under control in the USA.” We already knew that this wasn’t true. I had spent the previous weekend haranguing my visiting parents about the virus and begging them to purchase N95 masks before it was too late. But somehow I did not fully recognize until that moment that Trump was going to approach the biggest public-health emergency of our lifetimes with a strategy of outright denial. The Big Lie of 2020 had begun. So many more followed that it’s hard to remember the breathtaking simplicity of this first untruth, the foundational lie from which so many deadly consequences would flow.

“Just stay calm. It will go away,” Trump said on March 10th, when thirty-one Americans were dead. “It’s going to go away,” he said on August 31st, by which point nearly two hundred thousand had died. “It’s going to disappear,” he said on October 10th. “It is disappearing.” He said that the coronavirus was a Chinese plot and that concern over it was a Democratic hoax, that he knew how to treat it better than the doctors did, that it was just like the flu, and that, if you got it, you would get better, as he eventually did in October. “That’s all I hear about now. . . . covid, covid, covid, covid,” he said before the election. “By the way, on November 4th, you won’t hear about it anymore.” But that wasn’t true, either, and, since then, millions of Americans have been infected with the disease, and December has been by far our deadliest month yet.

Thinking back through the year, I realize, too, that there is much that we will not only forget but may not even believe actually happened. Trump pressing his Attorney General to prosecute his opponent weeks before the election? Trump holding rallies with thousands of unmasked followers during a deadly pandemic, including a superspreader White House event at which he introduced a Supreme Court nominee whom Republican senators hurriedly confirmed just days before Trump was defeated? “Person, woman, man, camera, TV”? “Obamagate,” which was supposedly “the biggest political crime and scandal in the history of the USA”? It’s just all too insane.

Remembering all of this is already both hard and painful. There is still much more to learn about the disastrous events of the past four years in Trump’s Washington and on his watch. But I recognize that there are powerful forces—in human nature, in the politics of both the right and the left—that will push us toward forgetting. The urge to move on from Trump is understandable, and potentially very, very dangerous. As of noon on January 20th, no matter what other madness comes between now and then, America will start to move on anyway.

Unless there is a full accounting for what happened with Donald Trump, 2020 is not over and never will be. I still don’t want to remember, but I know that forgetting is not an option, either.