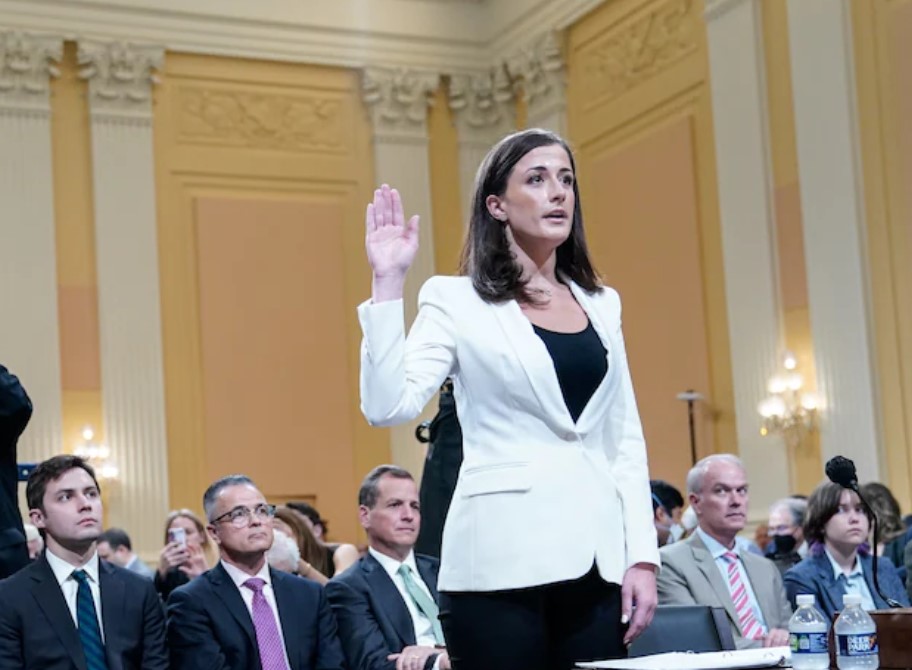 Cassidy Hutchinson’s surprise testimony before the House select committee investigating the Jan. 6 insurrection produced a lot of anticipatory buzz. How big would the hearing be? Did the hasty announcement of the testimony produce excessive expectations?

Let’s put it this way: The parlor game in identifying who would be the Jan. 6 committee’s John Dean — the insider who devastated the Nixon administration during the Watergate investigations — may finally have an undisputed winner.

Meadows and Trump knew there could be violence on Jan. 6 and enabled the mob.

Hutchinson testified that Trump lawyer Rudy Giuliani was giddy about Jan. 6 leading up to the day. Giuliani told her that “we are going to the Capitol.” When Hutchinson asked Meadows about the conversation, he replied, “There’s a lot going on, Cass, but I don’t know. Things might get real, real bad on Jan. 6.”

Hutchinson also said that even the president’s director of national intelligence, John Ratcliffe, wanted nothing to do with the White House’s post-election scheme. She confirmed that Meadows and other officials were aware of the potential for violence. Even on the morning of Jan. 6, 2021, Meadows was informed about armed protesters. Then-deputy White House chief of staff Tony Ornato told Trump about weapons present at the rally on the morning of the insurrection, a stunning confirmation that Trump knew of danger.

Hutchinson’s testimony suggested that Meadows was utterly indifferent to reports of potential violence. Meanwhile, Trump was furious that the Ellipse outside the White House, where the rally took place, was not filled with people. He demanded that attendees be allowed to go through the security checks with their weapons. Hutchinson testified that Trump said, “I don’t f—ing care that they have weapons. Let my people go. They’re not here to hurt me.”

(Trump, in a series of posts on Tuesday, largely denied Hutchinson’s testimony.)

This is the closest we have come to confirming that Trump wanted the armed crowd to march on the Capitol. His attempt to facilitate an armed mob storming the Capitol will be a critical fact in the decision whether to charge him.

When Hutchinson warned Meadows that the mob was getting close to the Capitol, he ignored her — even apparently slamming a car door twice as she tried to speak to him. When she finally did convey the information, she said Meadows had a “lack of reaction.” All Meadows wanted to know was how much longer Trump had left in his speech.

Hutchinson said after returning to the While House that Meadows seemed unconcerned as the mob reached the Capitol. In her telling, then-White House Counsel Pat Cipollone demanded to see Trump, but Meadows said Trump “doesn’t want to do anything.” When Cipollone and Meadows finally did talk to Trump in the White House dining room about the rioters’ “hang Mike Pence” chant, Trump reportedly said that the vice president “deserved” it and that he didn’t think the mob was doing anything wrong.

Regarding Trump’s 2:24 p.m. tweet during the height of the insurrection, in which he blasted Pence for not having “the courage” to reject electoral votes, Hutchinson poignantly said, “As an American, I was disgusted.” Deputy national security adviser Matt Pottinger decided upon seeing the tweet that he would resign.

Hutchinson also testified that Meadows dictated a statement calling on the mob to leave the Capitol. It never went out. She also said that Trump’s daughter Ivanka pleaded with the president to condemn the violence. Meadows, on the other hand, argued that the White House should “deflect” and blame the attack on antifa or other left-wing groups.

Trump’s advisers knew that Trump could be exposed to criminal charges.

Hutchinson testified that Cipollone tried to edit Trump’s “Stop the Steal” speech both for legal reasons and for how it would be perceived. The inflammatory elements remained.

Cipollone also weighed in on Jan. 3 against Trump’s request to march to the Capitol on Jan. 6. Hutchinson said Cipollone told her, “We need to make sure this doesn’t happen. We have serious legal concerns.” He again pleaded to make sure Trump didn’t go up to the Capitol on the morning of Jan. 6 because, as Hutchinson recalled him saying, “we’re going to get charged with every crime imaginable.”

Trump went ballistic when he was told he couldn’t go to the Capitol.

Trump desperately tried to join the crowd on Jan. 6 as it marched toward the Capitol. When he declared in his speech that he would join them, House Minority Leader Kevin McCarthy (R-Calif.) called Hutchinson and accused her of lying to him “all week” about the White House’s intentions for him not go to the Capitol. That’s an indication that McCarthy was fully aware of the danger of Trump leading the mob.

Hutchinson also said that when Trump was told in the presidential motorcade that he was not going to the Capitol, he became irate. Others told her that he said, “I’m the effing president. Take me to the Capitol now.” She also heard that Trump had tried to grab the steering wheel and lunged at the Secret Service agent who told him he could not go. Even after returning to the White House, Trump still said he wanted to go the Capitol.

Trump’s violent outburst in the car was not an isolated incident, according to Hutchinson. She said he had thrown his lunch against the wall when then-Attorney General William P. Barr said there was no evidence of voter fraud, and added that Trump had thrown dishes or flipped tablecloths on several occasions.

Hutchinson testified that Giuliani and Meadows both requested pardons from Trump after the insurrection. This follows revelations from the committee last week that a number of Republican members of Congress also sought pardons. Any prosecutor would use this as evidence of guilt.

Other Trump aides are cowards and dissemblers.

Hutchinson’s appearance before the committee placed a spotlight on the list of Trump aides who have refused to come forward with their eyewitness testimony, including Meadows, Ornato, Cipollone and others. In fact, Rep. Liz Cheney (R-Wyo.), the vice chair of the committee, read statements from unnamed witnesses that they had been warned by others to be “loyal” to Trump, suggesting the possibility of witness tampering.

Pressure or not, those who refuse to testify have chosen to protect themselves and Trump. Hutchinson’s courage and character stands in dramatic contrast to the spineless Trump protectors.

Image Credits: Cassidy Hutchinson, a top aide to Mark Meadows when he was White House chief of staff during the Trump administration, is sworn in on June 28. (Jabin Botsford/The Washington Post)