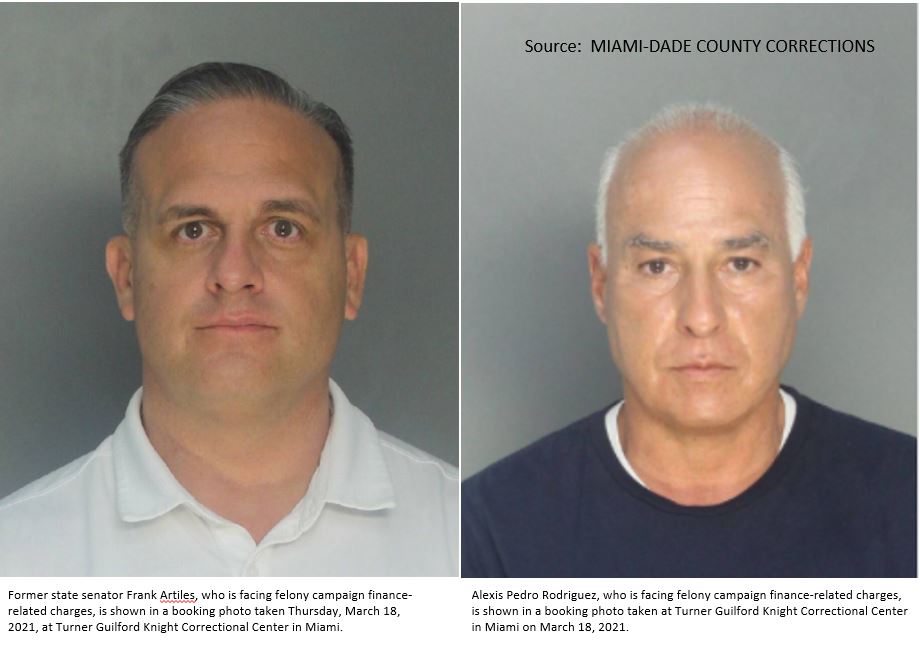 Editor’s note:  While Republicans in Tallahassee attempt to suppress Vote by Mail via SB 90, ostensibly to address election fraud; they will likely do nothing to address this alleged crime within their party.  How two faced!

Florida Democrats on Friday called for Republican Sen. Ileana Garcia’s resignation and for a special election to be held in Miami-Dade Senate District 37, a day after state prosecutors accused a Miami GOP operative of planting a no-party candidate to sway the outcome of the race in November.

Garcia’s 2020 victory strengthened Senate Republicans’ decades-long control of the Florida Senate. But Democrats are calling into question the integrity of the election after a 25-page arrest affidavit laid bare an alleged scheme by former Republican state Sen. Frank Artiles that involved him paying an auto-parts dealer more than $40,000 to run and influence the race.

The sham candidate, Alexis “Alex” Rodriguez, shared the same surname as the incumbent, Democrat José Javier Rodríguez. The point of his candidacy, investigators said, was to “confuse voters and siphon votes from the incumbent.” Garcia won by 32 votes out of 215,000 ballots cast. Alex Rodriguez received more than 6,000 votes.

“In the interest of fairness and the sanctity of our democratic electoral process, we call upon Senator Garcia to resign immediately,” Florida Democratic Party Chairman Manny Diaz said during a press conference Friday morning. “My late father would have never allowed me to accept any benefit that was clearly obtained through fraudulent means. He also taught me that where there is smoke, there is usually fire.”

But it is unlikely Senate Republicans and Gov. Ron DeSantis will go along with the requests.

“This is a matter for local law enforcement and the courts,” said Meredith Beatrice, a spokeswoman for the governor, who has the power under the state Constitution to suspend Garcia.

The Senate can remove a suspended official by holding a special session convened by the Senate president or by a majority of its membership. If she were to be removed, the governor could then call for a special election. Since taking office, DeSantis has suspended several elected officials, including Broward County Sheriff Scott Israel and former Palm Beach County Supervisor of Elections Susan Bucher.

Senate President Wilton Simpson on Thursday said he wanted to see “all the facts” before he comments on the case, details of which were made public by the Miami Herald last December.

Investigators said the goal of the election scheme was to “confuse voters and influence the outcome” of the race to represent the district, a large swath that includes downtown Miami, Coral Gables and Pinecrest.

When asked if the Democratic Party would be pursuing legal action to contest the results of the election, Diaz said “we are exploring every option.”

“We are also looking at potential referrals to the Department of Justice,” he added. “We are exploring every avenue that we have. This election can’t stand, because this election is tainted.”

As Democratic outcry grows over a victory they say was aided by “fraudulent means,” Senate Republican leaders and DeSantis have distanced themselves from the situation.

Investigators have not found evidence that Garcia knew of Artiles’ alleged scheme to influence the outcome of her race. Garcia told the Herald that she has never even met Artiles.

“I can’t attest, I can’t say and I can’t answer for someone I don’t know and for something that I haven’t done. I am not the focal point of this,” she said on Wednesday, when authorities raided Artiles’ house.

On Thursday, when Artiles surrendered and state prosecutors laid out the alleged scheme, Garcia said in a text message that she was not going to “hit back because I’m working across the isle [sic] trying to to do what is best.”

But, she asked, “Don’t I get merit or is it just partisan driven?”

“Why is everyone so sure that they just didn’t want to vote for the incumbent, José Javier Rodríguez?” Garcia said. “What about when the incumbent had an NPA in 2016, she was a 91-year-old NPA that got 9,979 [votes]. I’m trying to do the best I can for the community.”

“Whenever the integrity of the [elections] process is challenged it is a serious thing,” Farmer said.

Garcia sits on the Senate Ethics and Elections Committee, and serves as vice chair in the Senate’s Rules and Community Affairs committees.

Her first bill — one that adds protections to domestic violence centers — passed the Florida Senate unanimously. She touted the accomplishment on Twitter, and tagged José Javier Rodríguez on the post. She deleted the tweet.

On Thursday, Simpson sidestepped questions on whether the Legislature, which is in the midst of the 2021 legislative session, should address election issues with ghost candidates as seen in Senate District 37.

“This happens to be the topic of the day, so it will get accelerated based on the will of the Senate,” Simpson said.

Farmer said the situation “certainly has the attention” of the 16 Senate Democrats.

“The question is are our Republican colleagues going to join us, to prove to Florida they take election integrity seriously,” the Lighthouse Point Democrat said. “It’s that old saying, put your money where your mouth is.”

Florida Republicans so far have proposed election bills that would add hurdles to vote-by-mail, like requiring everyone who signed up for mail ballots in 2020 to reapply to get them in 2022, eliminating drop boxes and moving up the starting time for counting vote-by-mail ballots.

Democrats have called the bills a voter suppression tactic, intended to tamp down the record vote-by-mail support of Democrats in 2020, especially in the state’s largest metro areas. In 2020, there were 2.1 million Democrats who voted by mail, compared to 1.5 million Republicans and 1 million voters who were not affiliated with any party.

Meanwhile, Democrats are pushing one bill that would require no-party candidates to be registered as an independent for a year before running. If such a requirement had been in state law, it could have prevented Alex Rodriguez from running as an independent in the Senate District 37 race.

According to prosecutors, Artiles instructed Rodriguez to change his party affiliation from Republican to independent at the Department of Elections in Doral days before filing his paperwork to run for office.

Sen. Perry Thurston, however, said that like many other Democrat-led bills filed in the GOP-majority Legislature, “I don’t think any of them are getting any traction right now.”

“I don’t really know much about the back story,” Baxley, R-Ocala, said. “We need to learn a little more. I would not want to rush to judgment.”