Another reason for the Jan. 6 hearings: The GOP is still attacking democracy 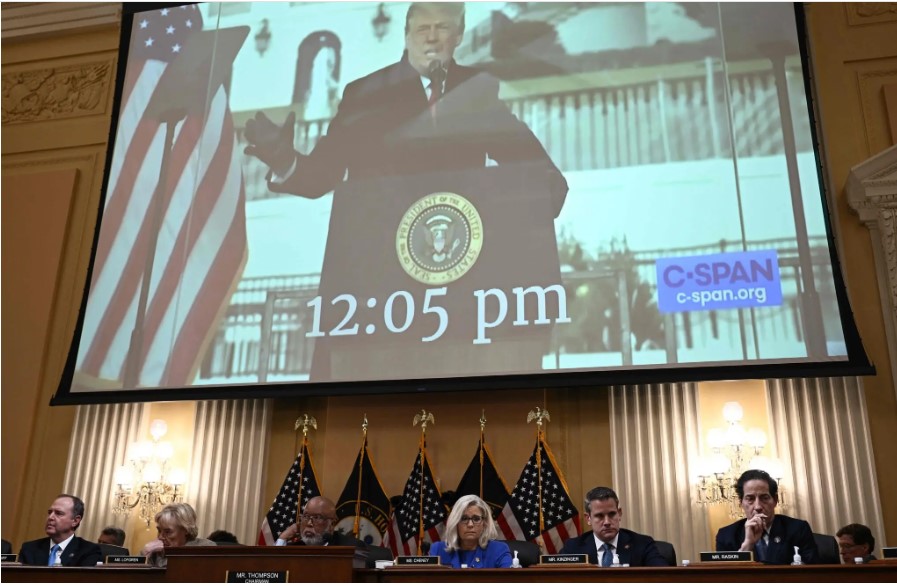 Retired federal judge J. Michael Luttig warned at the House Jan. 6 committee’s hearing last Thursday that Donald Trump and his supporters remain a “clear and present danger” to our democracy. Rep. Liz Cheney (R-Wyo.), the vice chair of the committee, has similarly warned about the “ongoing threat” the defeated former president poses.

This is not hyperbole. In fact, three vivid examples in recent days show that the radicalized GOP no longer subscribes to the basic principles of democracy.

The first came from Trump at the Faith and Freedom Coalition’s gathering last week. Apparently oblivious to the potential crimes to which he was confessing, Trump declared, “Mike Pence had a chance to be great. He had a chance to be frankly historic. But just like [former attorney general ] Bill Barr and the rest of these weak people, Mike — and I say it sadly because I like him — but Mike did not have the courage to act.” In other words, Trump has no qualms about attempting to pressure his vice president or the Justice Department to undo an election.

Does anyone believe he and his supporters wouldn’t pull out all the stops once more to persuade the House of Representatives not to certify the 2024 election if the Democratic nominee won? Trump has shown absolutely no hesitation that he is willing to deploy similar tactics in future elections. In fact, he still wrongly insists there is historical precedent for his coup attempt (even though John Eastman, his chief insurrection plotter, reportedly confessed in Trump’s presence that none exists).

Trump has also vowed political retribution against those who seek to hold him accountable, calling for an investigation into the Jan. 6 committee. “The first people to receive subpoenas should be crazy Nancy Pelosi and warmonger Liz Cheney, who by the way is, they say, down by 35 points in the great state on Wyoming.”

Another kind of the ongoing threat to democracy comes from New Mexico, where the state Supreme Court was compelled to order county commissioners in rural Otero County to certify their June 7 primary election. Commissioner Couy Griffin, a Republican who was sentenced last week for trespassing at the Capitol on Jan. 6, refused to certify the results not because of evidence of fraud but because of “gut feeling and intuition.” This is the Trump standard: It doesn’t matter if there is zero evidence of fraud. Sheer delusion is sufficient to violate election laws.

It’s the same mind-set that begot endless phony “audits” of the 2020 election results. Unless those who convinced their followers (or even themselves) that the election was stolen are held accountable, partisans taking elections into their own hands to deny the will of the people will become standard operating procedure.

Finally, there is the proliferation of threats of violence from Republicans. This stems from Trump egging on violence at his rallies in 2016, and it has continued ever since, despite warnings from some Republican officials such as Georgia election official Gabriel Sterling that someone could be injured or killed as a result of such rhetoric. Those warnings were prescient, as video of the mob hunting down Vice President Pence showed.

Casual use of violent rhetoric is now embedded in MAGA political culture. The latest comes from disgraced former Missouri governor Eric Greitens, who is running for his state’s Senate seat. He released an ad on Monday in which he carries a shotgun and declares “We’re going RINO hunting.” He and men in tactical gear then break into a house as though they are seeking to kill “Republicans in name only.” Twitter slapped a warning on the ad for “abusive behavior,” but left it up. Facebook took it down. The GOP is likely to nominate Greitens.

It’s a fundamental precept of criminal law that if illegal conduct goes unpunished, others will try to do it again. The threat to democracy remains, not just from Trump but also from a whole raft of election deniers who are running for office or wield power over local elections. If Trump and his ilk are not punished, the threat will only worsen.