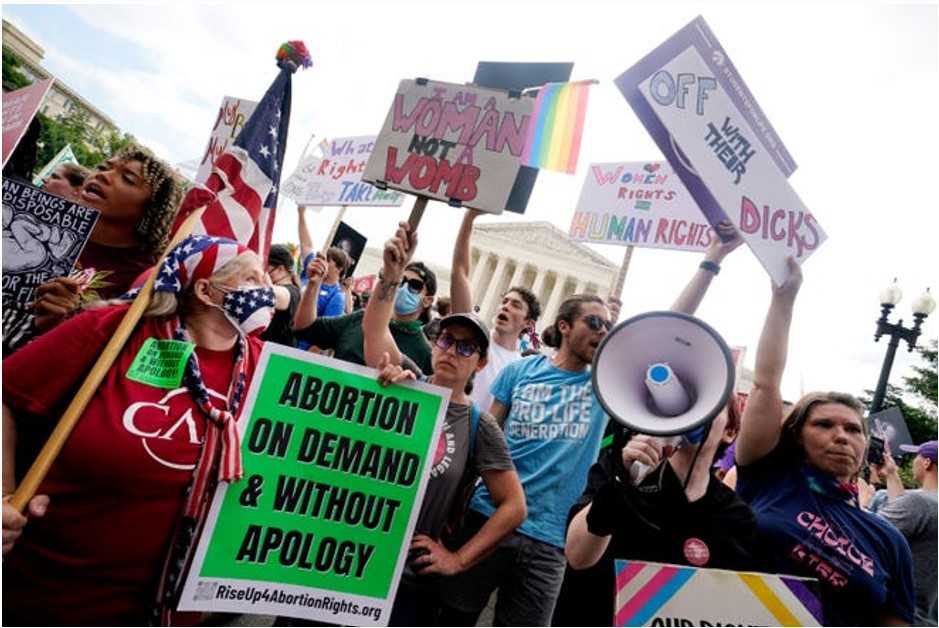 WASHINGTON – The Supreme Court ruled Friday that Americans no longer have a constitutional right to abortion, a watershed decision that overturned Roe v. Wade and erased a reproductive right that had been in place for nearly five decades.

In the court’s most closely watched and controversial case in years, a majority of the justices – all of whom were appointed by Republican presidents – held that the right to end a pregnancy was not found in the text of the Constitution nor the nation’s history.

Associate Justice Samuel Alito wrote the opinion for a 6-3 majority, with the court’s liberal justices in dissent.

“Roe was egregiously wrong from the start,” Alito wrote for the majority. “Its reasoning was exceptionally weak, and the decision has had damaging consequences.”

“It is time to heed the Constitution and return the issue of abortion to the people’s elected representatives,” Alito wrote.

The decision instantly shifts the focus of one of the nation’s most divisive issues to state capitals: Republican lawmakers are set to ban abortion in about half the states while Democratic-led states are likely to reinforce protections for the procedure. Access to abortion, in other words, will depend almost entirely on where a person lives.

“After today, young women will come of age with fewer rights than their mothers and grandmothers had,” Associate Justice Stephen Breyer wrote in a dissent joined by the court’s two other liberal justices. “The majority accomplishes that result without so much as considering how women have relied on the right to choose or what it means to take that right away.”

Though not unexpected, the court’s decision hit like a political and cultural earthquake, reshaping the relationship between millions of Americans and the government. While the opinion will be celebrated by conservatives, it will almost certainly lead to protests, new lawsuits and charges from the left that the nation’s highest court – ostensibly above the partisan fray – is just as political as the other branches of the federal government.

That’s exactly what happened when a draft opinion in Mississippi’s challenge to Roe leaked May 2. The unprecedented breach of Supreme Court protocol, which showed how the conservative justices might overturn Roe, led to protests across the country. The opinion Friday appeared to closely track with the earlier leaked draft.

Anti-abortion groups, which had pushed for Friday’s outcome for decades, applauded the decision.

“Today marks an historic human rights victory for unborn children and their mothers and a bright pro-life future for our nation,” said Marjorie Dannenfelser, president of the Susan B. Anthony SBA Pro-Life America. “Every legislature in the land, in every single state and Congress, is now free to allow the will of the people to make its way into the law through our elected representatives.”

Experts say the decision may set off challenges to other rights that, like abortion, have been grounded in the 14th Amendment’s guarantee of due process. Many of those have been taken for granted for years, such as the right to same-sex marriage, the right to interracial marriage and the right to access contraception.

Democrats and groups that support abortion rights decried the decision.

“Today, the Republican-controlled Supreme Court has achieved the GOP’s dark and extreme goal of ripping away women’s right to make their own reproductive health decisions,” House Speaker Nancy Pelosi, D-Calif., said in a statement. “Because of Donald Trump, Mitch McConnell, the Republican Party and their supermajority on the Supreme Court, American women today have less freedom than their mothers.”

The opinion follows a decades-long movement by conservatives to overturn the high court’s 1973 Roe v. Wade decision, which established a constitutional right to abortion. The effort to roll back that right was aided by President Donald Trump, who was elected in 2016 in part on a promise to name justices who would overturn Roe. Over the course of a single term, Trump managed to put three conservative justices on the high court.

At issue in the case is a Mississippi law that bans most abortions after 15 weeks of pregnancy – earlier than had been permitted under the high court’s previous decisions.

Jackson Women’s Health Organization, the last abortion clinic in Mississippi, challenged the state law in 2018, asserting it conflicted with Roe and a subsequent case in 1992 that upheld Roe. A 7-2 majority in Roe v. Wade established a constitutional right to abortion and allowed people to exercise the right until the end of the second trimester.

A subsequent decision in 1992, Planned Parenthood v. Casey, ended the trimester framework and allowed people to obtain an abortion until viability, the point when a fetus can survive outside the womb or about 24 weeks into a pregnancy.

Two lower federal courts agreed with the clinic, citing Roe and Casey. Mississippi appealed, asking the Supreme Court not only to uphold its ban but also to do away with the constitutional right to abortion altogether. Because the issue is so divisive and personal, the state argued, it should be decided by state lawmakers accountable to voters rather than by federal courts whose jurists enjoy lifetime appointments.

The frenzy around the case, Dobbs v. Jackson Women’s Health Organization, had almost as much to do with the justices who are on the high court as it does with the Mississippi law. Conservatives enjoy a 6-3 majority on the court for the first time since the Roosevelt administration. Three of them were nominated by Trump: Associate Justices Neil Gorsuch, Brett Kavanaugh and Amy Coney Barrett.

Mississippi had explicitly asked the Supreme Court to overturn Roe, calling it “dangerously corrosive to our constitutional system.” That is a more aggressive position than the state took when it first brought the case to the court in 2020.

For years, the legal battle over abortion has focused on regulating the procedure, such as requirements that minors inform their parents before ending a pregnancy or requiring doctors performing the procedure to have privileges at nearby hospitals. For anti-abortion groups, the Dobbs case represented the first opportunity in decades to focus squarely on whether the procedure itself is constitutional.

Facebook
Twitter
Email
PrevPreviousAnother reason for the Jan. 6 hearings: The GOP is still attacking democracy
NextCelebrations and condemnations on the Supreme Court decisionNext