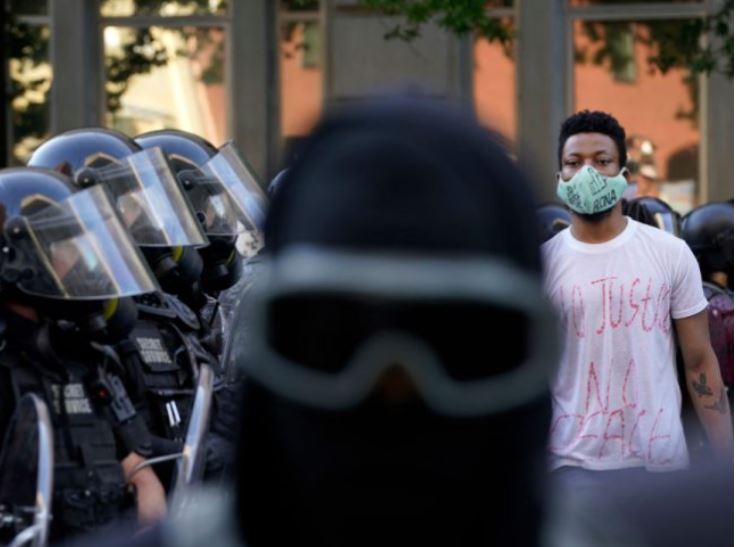 So fearful is he and his collaborators of the rising power of primarily Black racial justice protesters, they concocted and signed a sweeping bill into law that criminalizes the constitutionally guaranteed right to protest.

Going forward, those who march in opposition to the epidemic of police killings of unarmed Black and brown men, women, and children could be jailed and charged with offenses that could bring sentences as high as 15 years in prison.

While signing the bill last week, DeSantis called it “the strongest anti-looting, anti-rioting, pro-law-enforcement piece of legislation in the country.” It also gives legal cover to anyone who drives through, injures, or kills those protesting racial injustice, and threatens peaceful demonstrators with cruel and draconian punishment for engaging in “mob” behavior.

The general sentiment is that these laws are a blatant attempt to silence the Black Lives Matter movement and other racial and social justice organizations by severely curbing their ability to protest.

DeSantis is not alone.

Florida is one of 34 states where Republican-led or dominated legislatures have introduced 81 different anti-protest bills. In Indiana, a Republican proposal under consideration would prohibit anyone convicted of unlawful assembly from seeking elected office and would bar them from state jobs. Meanwhile, in Minnesota, a bill would block those convicted of unlawful protest from securing housing assistance, unemployment benefits, or student loans.

The GOP is attacking African Americans and Democrats from different angles. During 2021, Republicans have proposed a flood of voter suppression bills aimed at codifying the theft of elections. The crux of these efforts is former President Donald Trump’s “big lie.”

Since losing last November, he and his toadies across the United States continue to drum up patently false assertions and unfounded conspiracies about widespread voter fraud to justify suppressing the right to vote.

To date, there are 351 bills under consideration in 47 states. DeSantis has ignored a range of challenges facing his state, including the COVID-19 crisis, where he has been cavalier with people’s lives, eschewing the mask mandate and ignoring CDC and other medical guidelines, choosing to make this particular bill a priority for him and his party.

This new law concocted by DeSantis and his cohorts is an absolute outrage, a solution in search of a problem and unconstitutional on top of everything else.

Records by the Washington Post and Mapping Police Violence show that, since 2015, law enforcement in the United States has killed more than 5,600 people. African Americans comprised 28 percent of those killed by police in 2020 despite being only 13 percent of the population. Four months into 2021, cops have already murdered 335 Americans.

Black women are also at risk. Although they make up 13 percent of the female population, they account for 20 percent of the women shot and killed and 28 percent of unarmed deaths.

Despite this bloodbath, according to police misconduct researcher Philip Stinson of Bowling Green State University, only seven officers have been convicted in the past 20 years.

That’s why we march.

This is a time of grieving and a time of great pain for Black, brown, and Indigenous people in this state and country. But it is also a time to fight for our lives and protect our children because we understand better than most that the unrelenting cop killings of Black and brown people has cost lives, destroyed families, and upended communities.

The moral outrage and anger at the political inaction, eyes averted from the chaos, and meaningless thoughts and prayers had to be channeled somewhere else short of burning everything down. Hence the birth of the Black Lives Matter movement.

The breadth, scope, and range of protests has ratcheted upwards since a vigilante shot and killed Trayvon Martin in 2012 and after a jury allowed his murderer to walk in 2013.

We are seeing greater evidence of the mainstream beginning to understand and acknowledge what African Americans have been saying for years about the brutality and oppressive treatment meted out by mostly white cops.

There is intense opposition to these police-involved murders, as evidenced by the demands made of elected officials, the letters, the work with legislators to offer culturally competent training, measures aimed at producing, justice, fairness, and racial equity, as well as those doing the killing being held accountable.

But the psychic, emotional, and physical toll on Black people has been of little concern to politicians like DeSantis. Once again, we see members of the “law and order” party bending, manipulating, and engineering the law to punish Black people (and their allies) in their reckless and irrational effort to suppress and strangle freedom of expression.

In 2021, it’s not so fashionable to lynch African Americans from the nearest tree anymore, but there are always political, legislative, judicial, and extra-judicial levers to do the job.

The modern Republican Party — such as it is — is a grievance-driven coterie of characters who have embraced a misogynistic, xenophobic, nativist, anti-immigrant, anti-Black, racist agenda.

What we’re witnessing in post-Trump America is a clash of cultures, whites deeply afraid of being overrun by Black and brown people and a ruthless movement towards holding on to white minority power and rule at any cost.

This is why DeSantis and his minions are petrified.

America has never reconciled its Original Sin: Slavery. For 400 years, the country has carried the heavy burden of race and all the associated guilt. Much of white America has said all the right things, made the appropriate gestures, but they have never had any real desire to give up their considerable power, perks, and privilege.

There are “conversations” but no serious soul-searching or national effort to right these egregious wrongs because most white people believe they are somehow unaffected by the deeply embedded racism and discrimination present in every aspect of American life.

If the white power structure and their supporters resorted to feigning ignorance that would be one thing but, for the entirety of this country’s history, whites from all points on the political compass have worked overtly and covertly to control Black bodies, to contain and control where they live, and restrict, monitor, and attempt to curtail their movements. Law enforcement is a major instrument of carrying this out.

Another element of the Black-white dynamic historically is the pattern of white backlash against any significant Black gains. That is reflected in the rise of the Ku Klux Klan and white racial terror spawned after Reconstruction; in the coup d’etat that overthrew the Black and white-run city government in Wilmington, N.C., in 1898; in jealousy which led to the destruction of Black Wall Street and theft of the wealth amassed by African-American residents in Tulsa; Red Summer in 1919; and on and on.

Certain white people, including DeSantis and fellow Republicans, are deathly afraid of rising Black political power. They disapprove of the strength of social and racial justice movements, their resilience almost a year after George Floyd was killed, and deepening concerns about a swathe of white Americans awakening to this country’s pervasive racism and discrimination and what it represents.

As has become customary in the current iteration of the Republican Party, facts don’t matter.

DeSantis should know that truth is on the protesters’ side and they will not be deterred. Despite being alarmed at DeSantis’ politically motivated scare tactics, racial justice protesters in Florida and elsewhere have resolved to continue their protests, and to fight harder as they seek to bring into being a fair and just criminal justice system, racial equity, and the substantive transformation of America’s 18,000 police departments.

Expect more lawsuits to be filed and the pushback to intensify.

Meanwhile, according to the South Florida Sun-Sentinel, deputies have been instructed not to enforce the anti-rioting law unless it’s absolutely necessary. If it’s deemed necessary, the decision must be sent up the chain of command before officers take any action.

DeSantis may have fired the first shot across the bow, but he’d better duck because a fusillade of lawsuits and other heavy artillery will soon be heading his way.