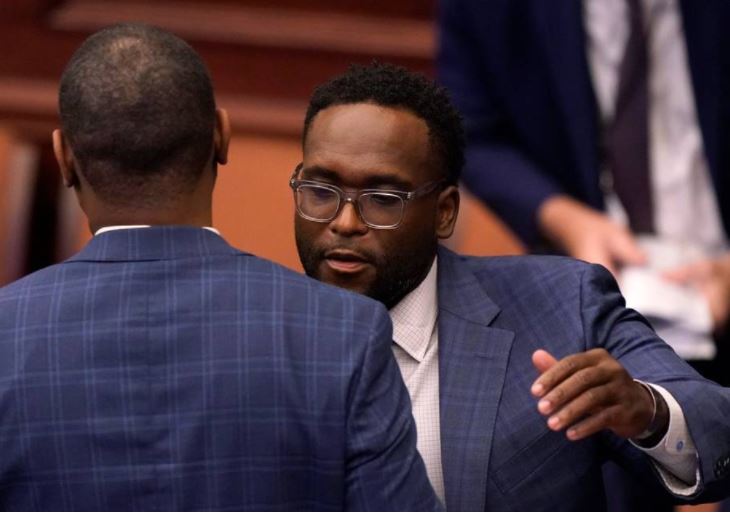 Halfway through Florida’s 60-day legislative session, this Editorial Board declared lawmakers were pushing an anti-people agenda.

We’re not here to retract that statement. Lawmakers did, after all, wrap up their work on Friday after passing an unnecessary “anti-riot” bill that will have a chilling effect on people’s right to protest; reversing the will of Key West voters who limited cruises at the city’s port; and banning transgender athletes from women’s sports.

But a late-session police-reform package turned out to be this session’s biggest, and most encouraging, surprise (Passing legislation to improve a program that aids families with children who were brain-damaged at birth — and whose shortcomings were well documented in a Herald series — also is deserving of an honorable mention).

It is remarkable that a Legislature that has taken a sharp turn to the ideological right passed anything that will increase police accountability. The Editorial Board now urges the governor to sign this thoughtfully and thoroughly negotiated House Bill 7051 into law. This law-and-order governor who went over and beyond in stifling protests, should insist on law and order within police departments, too.

There are things in the bill that lawmakers can be proud of:

▪ A requirement that law-enforcement job applicants disclose whether they are under investigation by another agency for wrongdoing. That will help prevent bad apples from changing jobs to evade accountability.

▪ A requirement that agencies report to the state shootings and use-of-force incidents that result in death or serious injury. This will provide crucial data for future reforms (assuming there’s legislative appetite for that).

▪ A requirement that an outside agency investigate police-involved shootings and a ban on the arrest of children younger than 7 years old. (Though should kids 8 to 12 years of age be arrested except for the most egregious of acts?)

▪ State standards for use-of-force, de-escalation and mental-health training and a requirement that officers intervene when they see another officer use force inappropriately.

MAKE IT THE LAW

It’s a no-brainer that Gov. Ron DeSantis, who’s remained mum on this issue, should sign HB 7051. Let’s hope that if, and when, that happens he does it with the same fanfare surrounding the signing of the infamous “anti-riot” bill, HB 1.

But let’s also be clear: HB 7051 is no sweeping reform. It is, in the words of advocates who spoke to the Editorial Board, a “start.”

“It’s a start, but my deepest concern is that instead of this being a start, this is the end from a legislative perspective in Tallahassee,” Melba Pearson, policy director at FIU’s Center for the Administration of Justice and a former prosecutor told the Editorial Board.

The legislation sets the floor for training, but it doesn’t say how that will take place or how stringent the standards should be — that will up to the Florida Criminal Justice Standards and Training Commission. It also puts into law what some law-enforcement agencies in Miami-Dade and elsewhere in Florida already are doing on their own, so it’s unclear what it will actually accomplish in those jurisdictions.

The bill limits the use of choke holds, which police departments in Miami-Dade, the city of Miami and Hialeah have already done. The duty to intervene and de-escalation training already are policy at the city of Miami Police Department, thanks in part to a settlement agreement with the U.S. Department of Justice in 2016 after a string of fatal shootings of Black men. The Miami-Dade Police Department also provides de-escalation training, and officers must exhaust all other alternatives before firing a weapon, the Herald has reported.

When it comes to police-involved death investigations, most agencies in Florida and Miami-Dade County already use the Florida Department of Law Enforcement or an outside agency, as HB 7051 requires.

Still, putting these requirements into state law is important because it creates uniformity across the hundreds of police departments and sheriff’s offices in Florida. Here’s an example of why that matters: The Brevard County Sheriff’s Office in Central Florida notoriously refused to bring in the FDLE to look into the death of an Army veteran in the county jail (the FDLE later reviewed the sheriff’s in-house investigation and said it was complete and thorough).

“The good thing about this bill is that it pushes for standardization, and I think standardization is a very good thing especially when it comes to policing, and just the criminal justice system in general, because it starts to eliminate disparity in treatment,” Pearson said.

However, bringing in the FDLE, another police department or a state attorney’s office to conduct these investigations isn’t a fool-proof solution. States attorney and police departments often have close relationships with each other. The role of civilian oversight is missing from the bill, said Rodney Jacobs, assistant director of Miami’s Civilian Investigative Panel, which reviews complaints of abuse filed against officers.

Like with most legislation, the devil is in how HB 7051 will be implemented. While “training” has become a buzz word in talks of police reform, not all training is the same — a couple of hours mandated each year won’t really move the needle, Jacobs told the Board.

Another important issue: Gathering use-of-force data as the bill would require is “very important,” but Jacobs pointed out that, “Police departments aren’t very good at collecting data.” It remains to be seen how quickly and efficiently the FDLE will be able to create a database. When the Legislature tasked the agency in 2018 with creating a database for statewide arrests and other information, it missed several deadlines, the Florida Times-Union reported last year.

With HB 7051, lawmaker reached for the low-hanging fruit. If they are serious about police reform that will have meaningful impact, they will return in following years and look at making the use of body cameras mandatory — and providing funding for that — and making it easier to de-certify and/or prosecute officers with a history of abuse.

Their overall goal should be to reduce unnecessary encounters with law enforcement by approaching police reform from a “public health” perspective, Jacobs said. Lawmakers should look at expanding pilot programs from places such as Orange County that dispatch mental-health workers with officers to certain calls.

That’s only a wish list for the future. In 2021, we don’t know if a better product would have been possible, given HB 7051 was a compromise between Black lawmakers, law enforcement and House Republicans led by Speaker Chris Sprowls, a former prosecutor and the son of a police officer reluctant to pass anything more sweeping. To get a “dream bill,” a new legislative makeup would be necessary, and that’s not something we predict happening anytime soon.

So we’ll deal with what we have, praise the work that has been done and hope that the momentum for police reform doesn’t end in the coming legislative sessions.