Tampa, Florida, June 29, 2021 A gathering of 50 or so people convened outside the offices of Senators Scott and Rubio in Tampa to deliver a clear, loud, message: “Do Your Job!”

Organized by the Network of Florida Indivisible Chapters, the June 29 rally was intended to make known to Florida senators that their inaction on key issues is unacceptable.  Rally participants wrote letters to senators which were delivered in person to office staff. The letters called senators to act on a range of issues such as the For the People Act, S 1, the George Floyd Justice in Policing Act, HR 1280, the John Lewis Voting Rights Advancement Act, S 4263, the Dream Act, HR 6, and many others.

Local print and TV media outlets were present at the rally.

“We’ve been doing this every week since early 2017, except during the pandemic,” said John Stewart, one of the event organizers. “They know we’re here. We’re getting their attention.” Stewart thanked those who had traveled from communities such as Punta Gorda, Sarasota, and St. Petersburg to participate in the event. 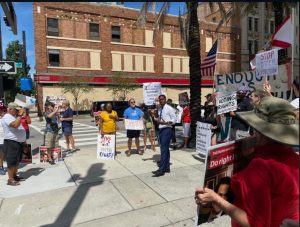