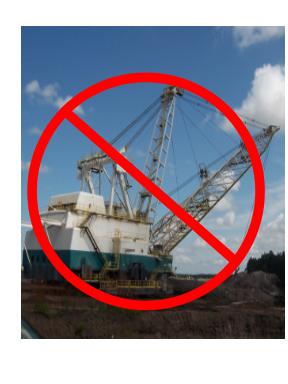 Nothing brings liberal Democrats and conservative Republicans together quite like the specter of a phosphate mine becoming your neighbor. On this topic, most agree: No mining!

The possibility that phosphate mining may be moving in next door took one step closer to becoming reality as the Mosaic Company and the DeSoto County Board of County Commissioners held a public workshop yesterday to discuss how Mosaic will protect water quality during and after mining in DeSoto County.

DeSoto County commissioners had voted “no” to rezone farmland to mining in 2018, but Mosaic sued the county. The resulting settlement called for a series of workshops. About 100 people in person and online attended yesterday’s workshop. DeSoto County residents as well as people from neighboring Charlotte and Sarasota counties attended the meeting.

The nearly day-long workshop was divided into two parts. In the first part, Mosaic experts described how they will monitor water quality, report their findings, and comply with regulations. The second part of the workshop was open for public comments; each speaker was allowed three minutes. More than 20 people, including three Charlotte County Dems spoke to the DeSoto County commissioners. The speakers were concerned about harm from phosphate mining. They fear polluted, tainted water from spills, mining effects on water levels, and lack of Mosaic’s credibility. Several people questioned how well the Florida Dept. of Environmental Protection will serve the public by monitoring and enforcing environmental regulations.

Several people talked about the poor track record of phosphate mining in Florida and past spills. The latest one being in Piney Point. Several commented that Desoto County already decided against allowing mining but that victory was snatched away by Mosaic’s global money.

I talked with several people attending the workshop. Although I wore my Charlotte Dems T-shirt, I had good conversations with people who told me they are Republicans. All I spoke with oppose Mosaic mining in DeSoto County.

Local elected officeholders are also greatly concerned about the harm from phosphate mining. Charlotte County commissioners, all Republican, and the City of North Port sent letters to Mosaic to discuss monitoring and controlling pollution from mining.

Mosaic is a Fortune 500 company and has deep pockets to finance its attempts, including lawsuits, to get phosphate mining permitted in DeSoto County. Phosphate mining is one topic that brings together people with differing politics. It will take a unified effort from many people to stop Mosaic. Cynthia and Mike Zarzano, both Republicans, agree. Cynthia says that preserving water quality is most important. “We have got to put Democrat and Republican differences away. We need to be laser-focused.”