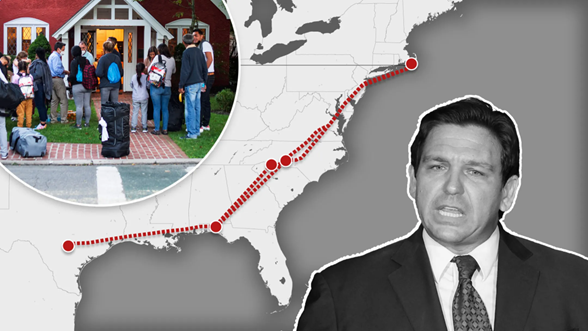 The Oct. 7 letter was sent to Markey and five other members of Massachusetts’ congressional delegation, who had written treasury officials last month to request a review about whether the federal funds were potentially misused.

“As part of our oversight work of the Coronavirus Relief Fund established by the CARES Act, we have already sought information from Florida about appropriate use of that fund,’’ wrote Richard K. Delmar, the federal agency’s deputy inspector general.

Florida didn’t directly use federal COVID-19 relief funds for the migrant transfer, Politico reported Wednesday. But state legislators earlier this year directed that $12 million in interest from the assistance be used to pay for the transport of “unauthorized aliens from this state,’’ Politico reported.

In the Oct. 7 letter, Delmar wrote that his office is also looking into Florida’s potential use of State and Local Fiscal Recovery Fund money for the migrant transfer.

“Regarding the SLFRF, we are seeking, from its program officials in the Department, more detailed analysis of the guidance they have issued,’’ Delmar wrote. “We will review the allowability of use of SLFRF funds related to immigration generally, and will specifically confirm whether interest earned on SLFRF funds was utilized by Florida related to immigration activities, and if so, what conditions and limitations apply to such use.’’

He said treasury officials plan to begin their review quickly.

“We are also monitoring legislative and judicial challenges to the use of the funds for this purpose; such developments may affect the scope and timing of our review,’’ Delmar wrote.

“For the sake of the migrants who were lured onto charter planes under false pretenses, and for the commendable Commonwealth residents who rallied together to offer support, I hope that this investigation sheds light on whether Governor DeSantis misused funds that were intended for COVID relief for Floridians,’’ he said in a statement.

Critics have denounced the migrant transfer by DeSantis, a possible 2024 Republican presidential candidate, as an exploitative and possibly illegal stunt, saying the migrants were lured into traveling to Massachusetts under false pretenses of work and housing opportunities.

DeSantis’ office has insisted the migrants voluntarily boarded two planes in Texas that made a stop in Florida before arriving at Martha’s Vineyard. There, the migrants were given emergency shelter before being moved to a military base in Bourne.

“We applaud Senator Markey’s efforts to hold Governor DeSantis accountable for misleading refugee families and using our state for his depraved political stunt,’’ Fernandes said by email. “Massachusetts is a well-run state that subsidizes poorly run states like Florida with our federal taxpayer dollars. While we don’t mind our money going towards support for families and vulnerable people living in the state of Florida, using it to abuse refugee families is unconscionable and demands action if the investigation finds DeSantis guilty of misusing taxpayer dollars.’’

Javier Salazar, the sheriff in Bexar County, Texas, said last month that his office had launched a criminal probe into whether the migrants were lured under false pretenses onto the flights. Boston-based Lawyers for Civil Rights, an advocacy group, has also sued DeSantis in federal court in Boston over the migrant transfer. That civil case is pending.