Lt. Gov. candidate says DeSantis is on Proud Boys’ side 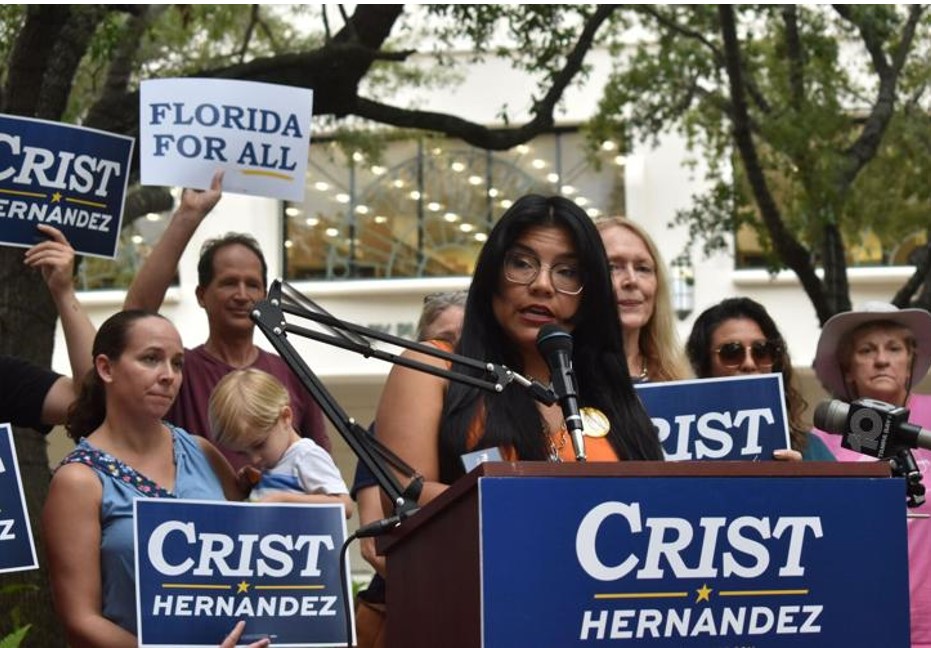 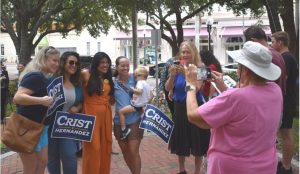 Karla Hernandez-Mats poses for a photo with supporters after the press conference (SUN PHOTO BY FRANK DIFIORE).

SARASOTA — The Democratic candidate for lieutenant governor criticized Gov. Ron DeSantis on Wednesday for making common cause with the Proud Boys in school board elections.

She was joined by JoAnne Devries, chair for the Sarasota County Democratic Party, and Paulina Testerman, the co-founder of Support Our Schools, a nonprofit advocacy group.

All three women spoke about the Proud Boys — a far-right organization with some members present at the Capitol riot on Jan. 6, 2021 — and their support for candidates endorsed by DeSantis in local school board races.

“However, DeSantis has decided to align himself with these groups,” Hernandez-Mats said at the press event.

Aside from running for lieutenant governor, Hernandez-Mats is the president of United Teachers of Dade, an affiliate of the United Federation of Teachers national union. She said that she had seen members of the Proud Boys attend school board meetings, threatening and harassing teachers who opposed attempts to limit teaching material.

She said she remembered seeing Enrique Tarrio, the Proud Boys’ chairman, attend one such meeting in person.

“I was there when he used a bullhorn to tell teachers that he would be showing up at their house very soon,” Hernandez-Mats said.

Tarrio, originally from Miami, is currently charged with taking part in a seditious conspiracy in connection with the Capitol riot. He was also charged with burning a Black Lives Matter sign that belonged to a DC-area church in the lead-up to the riot.

Hernandez-Mats said she compared the intimidation tactics employed by the Proud Boys to those used by pro-regime forces in Cuba and Venezuela.

She went on to say that she hoped that DeSantis’ positioning these groups would be “a wake up call” to Floridians.

Other speakers at the event echoed Hernandez-Mats’ concerns.

Testerman, a Sarasota County resident, said that she was dismayed to see that the presence of extremists like the Proud Boys and other groups had made Sarasota County “the conspiracy capital of the United States.”

“I refuse to take this lying down, and I am going to fight back,” Testerman said.

During the news conference, Hernandez-Mats was asked if she was concerned that DeSantis or his supporters would answer her accusations by claiming that she was aligned with groups they consider “extreme,” such as Black Lives Matter.

The candidate answered that neither she or Crist were working with any extremist groups. Instead, she said, they were aligned with groups like Support Our Schools aimed at promoting good education for students.

The news conference in the park on Wednesday came right after Hernandez-Mats’ first appearance in Sarasota the previous night, where she met with other state office candidates and supporters in the downtown area.

Later that same day, she attended two meet-and-greet events — one hosted in Sarasota by Women’s Voice of Southwest Florida and one hosted in Wilton Towers by the pro-LGBTQ Dolphin Democrats club.

Erin Driscoll, a local educator and mother, attended the rally and stood behind Hernandez-Mats with a sign in one hand and her 3-year-old son Joseph in the other. She said it was “fantastic” to see the candidate speak to an issue close to her heart.

“We’ve observed that kind of behavior at school board districts,” Driscoll said.

Reagan Fox, another supporter, said he was glad to see Hernandez-Mats putting emphasis on young voters like him, pointing to the Parkland survivors as an example of young people getting involved in politics.

“We’re a lot more individual in our voting choices,” said Fox, who was a senior in high school when the Parkland shooting happened in 2018.