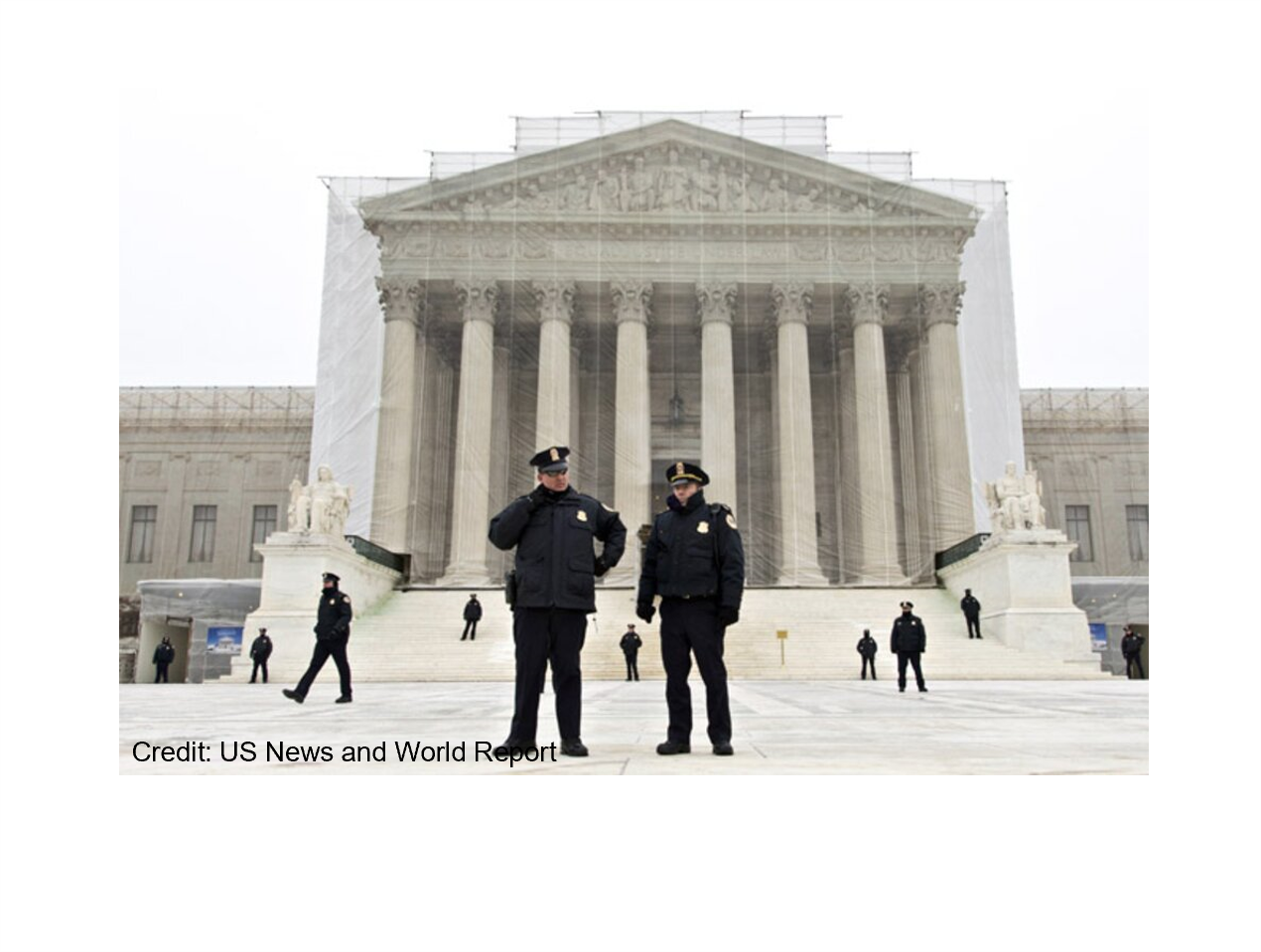 Marshal of the Supreme Court asks governors if they’d be willing to commit some grave constitutional violations among friends.

It’s reached a terrifying level of cliché to note that the ethical rules governing the Supreme Court don’t actually apply to the Supreme Court. But that’s not half as scary as the realization that the institution that exists as an opaque aristocratic shadow government way outside of the original public meaning of the Constitution has zero belief that ANY of its rulings should apply to itself.

The Marshal of the Supreme Court wrote the Republican governors of Maryland and Virginia demanding that they do something to stop all the protesters showing up outside the homes of the justices for upwards of… maybe an hour?

Earlier this week, for example, 75 protesters loudly picketed at one Justice’s home in Maryland for 20-30 minutes in the evening, then proceeded to picket at another Justice’s home for 30 minutes, where the crowd grew to 100, and finally returned to the first Justice’s home to picket for another 20 minutes. This is exactly the kind of conduct that the Maryland and Montgomery County laws prohibit.

Oh no! An unelected official who took it upon themselves to spit on the Constitution is sad that 100 people are peacefully outside the house? Um… didn’t the Supreme Court say something about this?

The final substantive regulation challenged by petitioners relates to a prohibition against picketing, demonstrating, or using sound amplification equipment within 300 feet of the residences of clinic staff….

The record before us does not contain sufficient justification for this broad a ban on picketing; it appears that a limitation on the time, duration of picketing, and number of pickets outside a smaller zone could have accomplished the desired result.

That’s from Madsen v. Women’s Health Ctr., 512 U.S. 753 (1994), where the Supreme Court ruled that you can go hurl insults outside the homes of abortion clinic workers all you want. The Supreme Court staffer in charge of security seems to think that disturbing a nurse is OK, but that the Constitution wouldn’t cover annoying attempted rapists or known sexual harassers (if such people were even on the Supreme Court!!!) simply by virtue of them being on the Supreme Court.

If anything, this is backward: the Framers intended public officials — not private health care workers — to weather criticism. Now, they didn’t intend for the Supreme Court to get in the business of willy-nilly trashing the Bill of Rights either, but here we are.

In fairness to SCOTUS Marshal Gail Curley, she might have thought she had a receptive audience because the two dipshits she wrote — Republican Maryland governor Larry Hogan and Republican Virginia governor Glenn Youngkin — had already beclowned themselves asking the Department of Justice to stop the protests outside the homes of the crop of justices play-acting at Justice Taney’s legacy. However, they’d already learned this isn’t how any of this works. Prompting the communications director for Hogan to reply:

Of course these paragraphs came after three paragraphs whining about how the DOJ hasn’t stepped in to crack protester skulls either as if the First Amendment is merely advisory for the federal government.

You know, technically the First Amendment only applies to the federal government, which used to be a meaningless distinction before the insane gun people “square peg/round holed” Fourteenth Amendment incorporation into as excuse why the original public meaning of the Second Amendment didn’t matter. Whatever… law nerd stuff!

And, not to be a broken record, but… didn’t the Supreme Court say ANOTHER something about this?

Nobody thinks the justices should have people banging on their door at all hours of the night, but people congregating on the sidewalk during routine hours to be peaceably seen is kind of a big part of that First Amendment thing that another justice can’t remember. The idea that an official within the Supreme Court system would reach out to other government officials to ask them to breach federalism principles to enforce a facially unconstitutional action in violation of multiple Court precedents simply because the Supreme Court thinks it should legitimately exist above the law is disturbing.

Because I don’t think the Marshal wrote this without authorization from a justice who should know better.

Joe Patrice is a senior editor at Above the Law and co-host of Thinking Like A Lawyer. Feel free to email any tips, questions, or comments. Follow him on Twitter if you’re interested in law, politics, and a healthy dose of college sports news. Joe also serves as a Managing Director at RPN Executive Search.