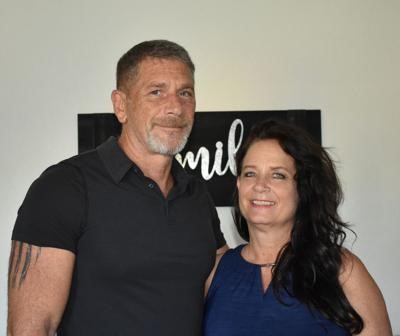 Davis, 57, said the political action committee will pool campaign contributions from members and donate to Trump’s bid in 2024 whether he runs on the new Patriot Party Davis and others are in the process of forming, or as a Republican again.

Should Trump decide not to run, the Patriot Party will be backing its own candidates in what Davis called the “swing party.” And David said he plans to run himself as one of those candidates against Sen. Rick Scott in 2025.

Davis said he was “not 100% happy, especially with the given legislature not speaking up for the people of Florida.” As a candidate and senator, “I’m going to make a statement,” he vowed.

The Daily Sun interviewed Davis and his wife Jeanne at their home where he talked about his decision to do something to help Trump, whom he called “the voice of the people,” get re-elected.

“There’s a disconnect with most of the Republican party in Congress and those who supported President Trump; 10 Republicans in the House voted to impeach him,” he said.

As a result, Davis and others connected with the Patriot Party movement are urging registered Republicans to leave the party and register with no party affiliation, he said.

News of the PAC’s incorporation drew a denial from a Trump campaign spokesman who said Davis’ effort was not affiliated with Trump.

Davis and others hope that if Trump does run again, it will be on the Patriot Party ticket.

The idea to form another political party came while he was watching TV. “My grandson was sitting next to me and he pulled on my shirt sleeve. It hit me — I wondered what the future will be like for my grandchildren.”

He said the mistrust and divide in the nation caused him to think that a swing party just might pull people together.

He and Jeanne have three sons in their 20s, and a granddaughter who is 2 months old in addition to their grandson. He said he wants his sons “who are starting their careers, to be able to own their own house, car, and be able to feed their family.”

Davis said it all started back in December when he had a Facebook page for his Patriot Party, then switched to MeWe, a similar social media group, where he communicated with like-minded people. “Because I opened the group and own the group on social media, it got to a point they asked me to make a decision.

“I put in about 18 hours a day over the weekend” coordinating the PAC and getting more states involved in the formation of the Patriot Party. He said he’s drawn interest from people in Idaho, Alabama and Indiana.

David incorporated the PAC in Texas and not in Florida due to privacy concerns, he said.

Davis will hold his first committee meeting Thursday at 4 p.m.

When asked who would want to join his new political party, Davis was adamant in saying it would not be just for disgruntled Republicans but is “more broad-based.”

He said the two major parties leave no room for unity. “Don’t be surprised if people from blue states like New York and California join the Patriot Party.”