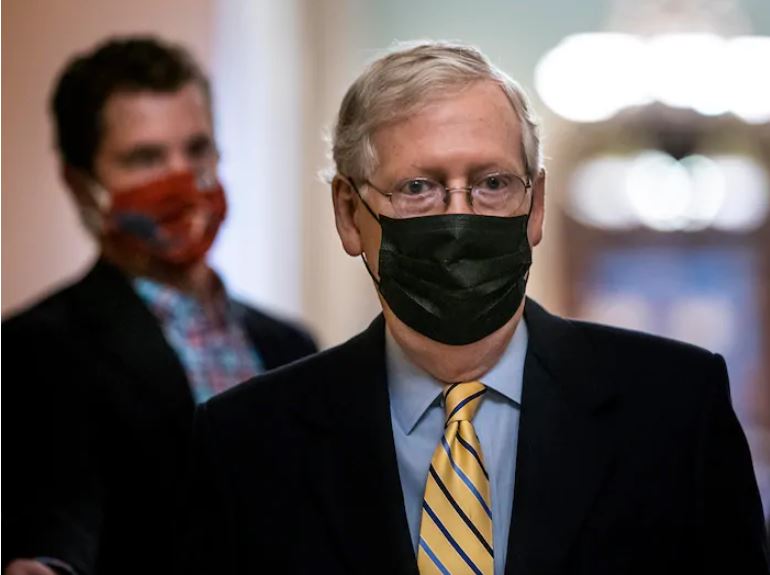 President Trump and Republicans campaigned in 2020 by scaring Americans into thinking Democrats would “defund the police” and unleash a crime spree.

This helped Republicans keep control of the Senate (for now) and grow their numbers in the House. So what are they doing to celebrate? Why, they’re defunding the police — as violent crime surges.

GOP leaders over the past week defeated efforts to help states and cities that are facing cutbacks to public safety and other services because of the pandemic-caused budget crisis. They claimed this would amount to what Senate Majority Leader Mitch McConnell (R-Ky.) called a “blue state bailout.” In reality, it was more of a “blue bailout” — and police in blue and red states alike are now on the chopping block.

“Despite the clear evidence that shrinking revenue in cities across the country is leading to job loss and the reduction of critical services like public safety,” the bipartisan U.S. Conference of Mayors protested this week, “Congress chose to turn its back on first responders, police, firefighters and other essential workers.”

This isn’t theoretical. In large part because of the federal government’s months-long refusal to help, localities across the country are involuntarily defunding the police in real time.

Dayton, Ohio, is no longer planning to hire a new class of police in 2021 because of the budget crisis. Though trying to protect public safety, Dayton reportedly plans a small reduction in existing police jobs.

Oakland, Calif., announced Sunday that it was cutting “$20 million in public safety expenditure.” The city’s police chief had warned that “each of these critical overtime and program cuts reduce vital prevention, intervention, and safety services.” Oakland hadn’t implemented police cuts because of the defund movement, but the budget crisis leaves no choice.

Los Angeles has been wrestling with possible cuts to the LAPD of more than 600 officers and employees. The city is reducing policing programs — not, primarily, because of “defund” activists but because the city is broke.

Pittsburgh has considered cutting 200 police officers. Jurisdictions ranging from sprawling Dallas to little Hazelton, Pa., have moved toward reducing police pay and overtime. Illinois is contemplating $71 million in cuts to public safety. In Michigan, cities are begging the state for help avoiding cuts to police.

An August study by the Police Executive Research Forum, a police-leader membership organization, found that, of 258 police agencies questioned, 48 percent expected budget cuts or already had dealt with cuts. Among large police departments, 58 percent expected or had experienced cuts. Only 16 percent overall had or expected increases.

PERF’s director, Chuck Wexler, sees the expectation unfolding, with delays in police hiring, cuts in overtime, training and technology, and the first indications of layoffs. Compounding the problem, he told me, is “you have this huge spike in violent crime” after decades of decline. Though federal statistics lag, PERF calculates that homicides were up 28 percent in the first nine months of 2020. (Aggravated assaults increased, too — though, happily, rapes and robberies declined.)

There are various explanations: economic collapse, closed schools, police holding back because of police-misconduct criticism or numbers stretched thin by demonstrations. Whatever the cause, “the reality on the ground is significant spikes in homicides across the country, and that just seems to be being missed,” Wexler said.

It’s easy to miss as Trump and his aides stir up chaos in the final weeks of his presidency: throwing the just-passed covid relief bill into doubt, risking a government shutdown, pardoning lawbreaking former aides and Republican lawmakers, handcuffing the Federal Reserve, undermining faith in the election, and winking at a Russian cyberattack on the United States.

But the refusal to help states and cities in the pandemic-caused fiscal crisis (McConnell once suggested letting them go bankrupt) is dangerous. As the liberal Center on Budget and Policy Priorities points out, 1.3 million state and local workers have lost their jobs since February. About 1 million of those losses have come in education, but it’s happening to public safety workers, too.

Washington’s refusal to help states and localities is, ironically, doing more to defund the police than the left’s “defund” movement could. Though there are exceptions (New York, Austin, Seattle), a Bloomberg News study in September concluded that, overall, the defund “rallying cry hasn’t translated into reality.”

Trump and Republicans were correct when they warned of a threat to public safety. But the perpetrators weren’t “leftist” militants or Black Lives Matter activists. The culprits are Republicans who promised “law and order” but, with their votes, defunded the police.