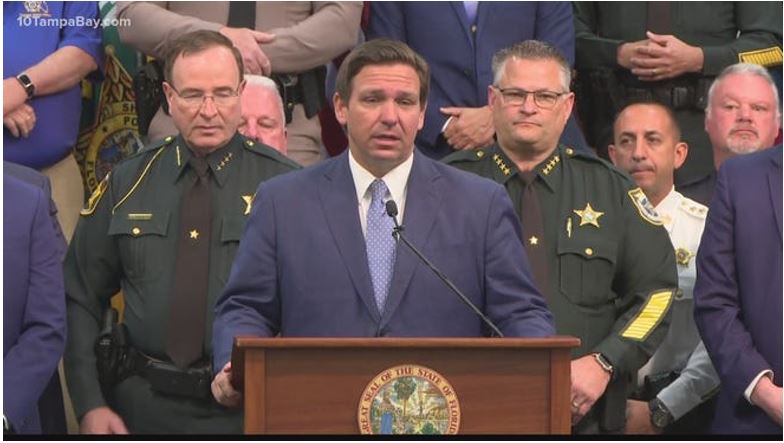 In 2016, then-candidate Donald Trump in an interview with Jake Tapper refused to disavow former Ku Klux Klan leader David Duke, who had publicly endorsed his campaign. (Trump later improbably claimed his refusal to disavow Duke was due to a faulty earpiece.) As president, Trump famously insisted there were “very fine people” on both sides in the 2017 clash between protesters and neo-Nazis in Charlottesville. And during his 2020 debate with Joe Biden, Trump repeatedly avoided condemning the white supremacist group Proud Boys, instead telling them to “stand back and stand by.”

Florida Gov. Ron DeSantis, who apparently longs to inherit the mantle of MAGA leader, has paid attention. In his state, images of a Nazi flag-waving group shouting antisemitic slurs in Orlando flooded news coverage over the weekend. The governor’s press secretary tweeted (and soon deleted) a bizarre suggestion: “Do we even know they’re Nazis?”

On Monday, CNN reported that DeSantis “lashed out at those who called on him to condemn Nazi demonstrations that had taken place over the weekend near Orlando, accusing his political opponents of trying to ‘smear me as if I had something to do with it.’ ” He insisted he would not be “playing their game.”

In response, DeSantis’s Democratic opponents for governor deplored his reaction. Sen. Rick Scott (R-Fla.) and other Florida politicians also swiftly condemned the demonstrators. The Florida Anti-Defamation League tweeted: “We need all leaders to call out antisemitism and hate, rather than push false narratives or conspiracy theories. The Jewish community is on high alert following recent events, including this weekend’s neo-Nazi rally and assault in Orlando.”

But DeSantis, even though he governs the state with the third-highest number of Jewish residents, knows his base. He also knows the support of his potential presidential campaign would not like a leader who calls out white supremacists.

At a time of rising antisemitism and just weeks after another terrorist attack on a synagogue in Texas, DeSantis’s reaction is stunning but not surprising. At its most basic level, the MAGA movement has always been about white supremacy. Its members have induced hysteria that foreigners and non-White Americans are taking over the country and marginalizing White Americans. This sentiment was central to Trump’s anti-immigrant rhetoric, his sympathy for white militia groups and his fearmongering about Black people moving to White suburbs. It is what drives the efforts to suppress voting.

White supremacy also explains the reaction among many Republicans to Biden’s decision to place a Black woman on the Supreme Court. As Georgetown University history professor Thomas Zimmer put it, “Whether or not that has any immediate effect on the Supreme Court’s decisions, for a movement centered around the idea that America is a white Christian patriarchal nation, a place where white Christian men have a right to dominate, a Black woman rising remains a threat.” At bottom, these are “conflicts over who gets to determine what is and what is not accepted and acceptable in U.S. society, which has traditionally been the prerogative of a white male elite.”

In the minds of MAGA cult leaders such as Trump and DeSantis, acceding to demands from cultural “elites” would be a sign of weakness or evidence that they cannot withstand the criticism that comes with defending White privilege. Refusing to do so is the ultimate expression of “you’re not the boss of me.”

Anyone who thinks DeSantis would be an improvement over the unapologetically racist former president need only look at this episode to see why that is wrong. On its surface, refusing to condemn Nazis in a swing state such as Florida makes no sense. But in the twisted MAGA world of white supremacy, it makes perfect sense.