Should the DOJ prosecute Trump? 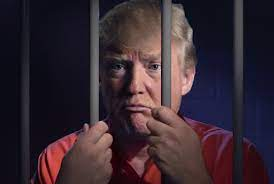 The following is from Robert B Hubbell’s June 21st 2022 newsletter:

The damning presentation by the January 6th Committee has shifted the conversation from whether Trump committed crimes to whether it is a good idea to prosecute Trump for his crimes. Teasers from the Committee’s presentation scheduled for Tuesday, June 21st at 1:00 PM Eastern suggest that evidence of Trump’s actions will deepen and compound his exposure to indictment and prosecution. In the surest sign that this new reality is seeping into Trump’s reptilian brain, Trump operatives are hatching a plot to make John Eastman the “fall guy” for the failed coup. See Rolling Stone, Exclusive: Trump’s Team Setting Up Eastman to Take Blame for Jan. 6. The article notes that

Trump in recent weeks has told confidants that he sees no reason to defend the lawyer who tried to help him overturn the 2020 election, sources tell Rolling Stone. . . [Trump] has privately insisted he “hardly” or “barely” knows Eastman, despite the fact that he counseled Trump on taking a string of extra-legal measures in a bid to stay in power and wrote the so-called “coup memo” . . . .

When Trump claims he “barely” knows you, it is time to call your lawyer and negotiate a plea deal. Trump is once again proving that he is no legal genius. Throwing John Eastman to the wolves increases the likelihood of convicting Trump. Good!

But the growing strength of the case against Trump has generated a new round of defenders of Merrick Garland’s investigation of the coup’s leaders. On Monday, about a dozen readers sent me a copy of an article by Harvard Law Professor Jack Goldsmith in the NYTimes, Opinion | Prosecute Trump? Put Yourself in Merrick Garland’s Shoes. Like many commentators, Professor Goldsmith cites the many obstacles that prosecution of Trump will entail. Goldsmith claims that Garland must decide (1) whether to appoint a special counsel to prosecute Trump, (2) “whether he has adequate evidence to indict Mr. Trump,” and (3) “whether the national interest would be served by prosecuting Mr. Trump.”

The question of whether Garland should appoint a special counsel has been answered—he hasn’t appointed one. If Garland believes he has a conflict of interest, it existed within days of taking office. So, this issue seems foreclosed.

The question of whether there is sufficient evidence to indict Trump is not a close question in my view. Rarely does a prosecutor have an audio recording of a crime being committed—the attempt to persuade Raffensperger to “find” 11,780 votes necessary to overturn the Georgia election for president. See, e.g., The Hill, Watergate prosecutor: Georgia case could ‘send Donald Trump to prison’.

As reported in The Hill, Watergate prosecutor Nick Akerman said,

Prosecutors love tape-recorded evidence, because you can’t cross-examine it. What’s significant with those tapes is — when you put it into the context of all the evidence the Jan. 6 committee has uncovered, you put that together — Donald Trump has zero defense in Georgia.

Will Trump raise defenses? Of course! Will he appeal? Of course! Will he be acquitted? Absolutely no chance! Will he be convicted? Maybe, maybe not. Are those reasons not to prosecute? No! The evidence of guilt is overwhelming because the crimes were committed in public. If Trump is not convicted, it will be because a Trump loyalist refuses to deliberate in good faith.

And let’s put to rest the handwringing argument that Trump’s (allegedly) mistaken belief he lost the election makes it difficult to prove criminal intent. It does not! Professor Goldsmith observes “Many have noted that Mr. Trump can plausibly defend these charges by arguing that he lacked criminal intent because he truly believed that massive voter fraud had taken place.” That argument betrays a misunderstanding of criminal intent by the “many who have noted” the argument.

Suppose, for example, your neighbor breaks into your house, holds you up at gunpoint, and takes a bowling trophy that your neighbor believes he rightfully won at a league championship. Does your neighbor’s mistaken belief give him a defense to breaking-and-entering and armed robbery? NO!!! If your neighbor wanted the trophy and it rightfully belonged to him, his remedy was to file a legal action in the courts to regain possession of the trophy—not to take the law into his own hands.

Likewise, it does not matter whether Trump believes he rightfully won the 2020 election. That belief does not excuse his efforts to override the 12th Amendment, which limited Pence to “opening” and “counting” the electoral ballots. If Trump wanted a different outcome, his relief was in the courts—which roundly rejected his claims.

Indicting a past and possible future political adversary of the current president would be a cataclysmic event from which the nation would not soon recover.

I have lost all patience with this argument. Did Professor Goldsmith see what happened on January 6th? That was a “cataclysmic event from which the nation will not soon recover.” If Garland does not prosecute Trump, we will witness another insurrection—but it will be worse than the first. It cannot be repeated enough: The only thing worse for the nation than prosecuting Trump is not prosecuting Trump.

Robert B. Hubble is an attorney in Los Angeles.  He publishes a daily newsletter in which he discusses current political topics.