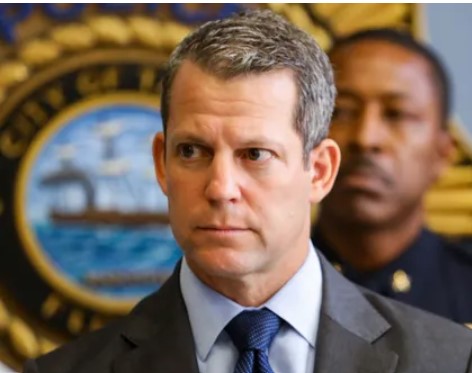 The lawsuit, filed in the Northern District of Florida, alleges DeSantis violated Warren’s constitutional right to free speech in his decision to remove the prosecutor from office via executive order.

It also challenges the legality of the suspension through a concept called quo warranto, a process through which an ousted official can ask the court “to determine whether a state office or agency has improperly exercised a power or right derived from the state,” the lawsuit says.

“In our country, there are protections for freedom and limits on power,” Warren said Wednesday morning at a news conference in Tallahassee. “Ron DeSantis may not like them. He may not respect them. But he does have to follow them.”

“It’s not surprising Warren, who was suspended for refusing to follow the law, would file a legally baseless lawsuit challenging his suspension,” said the governor’s press office in a statement. “We look forward to responding in court.”

The lawsuit asks the court to find DeSantis’ executive order unconstitutional and order him to reinstate Warren as state attorney. U.S. District Judge Robert Hinkle will preside over the case, according to federal court records. He has been on the bench since President Bill Clinton nominated him in 1996.

The executive order suspending Warren cited two policies he’d implemented in the state attorney’s office as well as his participation in two joint statements condemning and vowing not to participate in the prosecution of those seeking or providing abortions and gender-affirming care to transgender people. Florida has no laws pertaining to transgender healthcare, and no abortion cases have gone through Warren’s office.

The statements were facilitated by Fair and Just Prosecution, a network of about 70 reform-minded prosecutors across the country. Executive Director Miriam Krinsky said in a statement Wednesday that the group applauded Warren’s legal challenge.

“Warren was fired for being transparent with his community about the values and priorities that guide him as he exercises well-established prosecutorial discretion,” she said. “If these are grounds for removal, we’d be hard pressed to find any elected prosecutor whose job is safe from the governor’s tyrannical whims.”

The policies DeSantis took issue with are known as “presumption of non-prosecution” policies, meaning that the office would not pursue certain charges. Warren’s policies applied to low-level, non-violent offenses including disorderly conduct, soliciting and several driving charges such as expired driver’s license and no vehicle registration. Both policies provided for exceptions in cases in which public safety was at threatened.

Such policies resemble arrest diversion programs, which have become an increasingly common reform to help those who qualify avoid criminal records and take pressure off an overloaded criminal justice system. DeSantis contends the non-prosecution practice amounts to a dereliction of duty.

Since his surprise suspension Aug. 5, Warren has made the rounds on cable news and social media, criticizing the governor’s decision and hinting at a legal challenge.

He hired attorneys David Singer of the Tampa law firm Shumaker, Loop & Kendrick as well as Jean-Jacques Cabou, a partner at the international law firm Perkins Coie and the co-chair of the firm’s white collar and investigations practice.

Also at Wednesday’s news conference, Warren asked for donations to his legal defense fund. He declined to answer a question about who had donated so far.

In announcing his lawsuit against DeSantis, Warren appeared on CNN on Wednesday morning, saying the governor violated his First Amendment rights and abused his power under the state constitution by suspending him as an elected official.

“We’re fighting back to make sure that even though Ron DeSantis is governor, the First Amendment still has meaning. The Florida constitution has meaning and elections still have meaning,” he said.

“This isn’t about anything that I’ve done. This is about what I’ve said.”

Agriculture Commissioner Nikki Fried, who is running for the Democratic gubernatorial nomination against Charlie Crist, blasted DeSantis for his actions against an elected official during a campaign stop Tuesday in Tallahassee.

She said the “overreaching and overstepping of this governor” represents “the most dangerous thing to our democracy that we have seen.”

Contributing: James Call, a member of the USA TODAY NETWORK-Florida Capital Bureau. He can be reached at jcall@tallahassee.com. Follow on him Twitter: @CallTallahassee

Kathryn Varn is statewide enterprise reporter for the Gannett/USA Today Network – Florida. You can reach her at kvarn@gannett.com or (727) 238-5315.

Facebook
Twitter
Email
PrevPreviousThanks to Ron DeSantis, Florida set to force child to give birth against her will
NextAirborne exposure to red tide could have neurological effect, Florida study suggestsNext