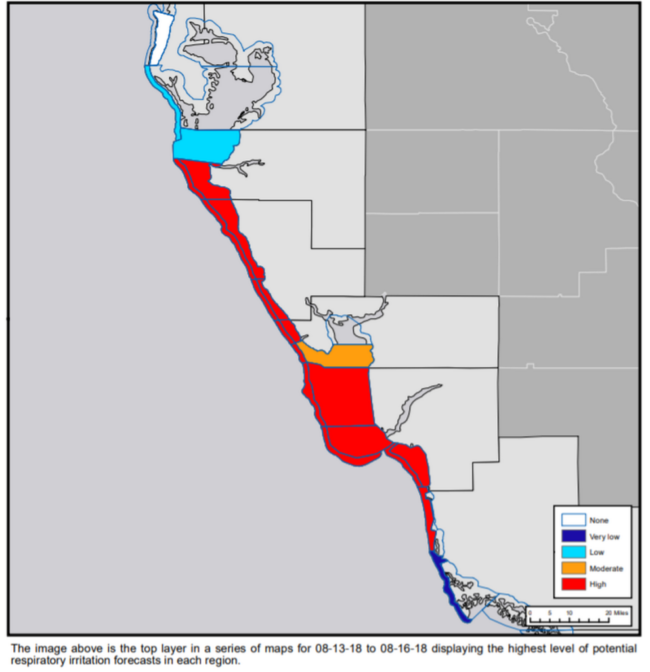 Researchers from the Roskamp Institute found new evidence suggesting that airborne exposure to red tide could have neurological impacts — especially for those with a previous history of migraine or chronic fatigue syndrome.

“During previous studies looking at how red tide toxins affected lung function, study participants sometimes reported headaches and we thought it was important to investigate this further,” said Laila Abdullah, a research scientist at the Roskamp Institute.

“Building on previous findings, we found that migraine sufferers reported headaches during red tide blooms. However, we did not expect that people would report NSP-like symptoms,” she said.

NSP, or neurotoxic shellfish poisoning, is an illness resulting from the consumption of red tide toxin-contaminated shellfish. Volunteers reported symptoms similar to NSP — such as nausea, vomiting, dizziness, or headaches — without eating tainted shellfish. Those with NSP-like symptoms also tended to have a previous medical history of migraine or chronic fatigue syndrome.

“Different people respond to the toxins in different ways — from not being affected at all to experiencing a range of severe symptoms,” Roskamp Institute Executive Director Michael Mullan said. “We don’t understand why that is the case nor do we know the dose levels of toxins that are needed to cause neurological symptoms. There is still much to understand about this toxin and the levels of threat it poses to human brain health.”

More than 76% of Florida’s population lives along the coasts, according to the NOAA Office for Coastal Management. The U.S. Environmental Protection Agency also predicts that harmful algae blooms are likely to occur due to climate change’s impact on warmer water temperatures and rising sea levels.

Stefania Lugli covers a little of everything for the Herald-Tribune. You can contact her at slugli@heraldtribune.com or dm her on Twitter at @steflugli.