The GOP’s ‘Commitment’ is to total political warfare 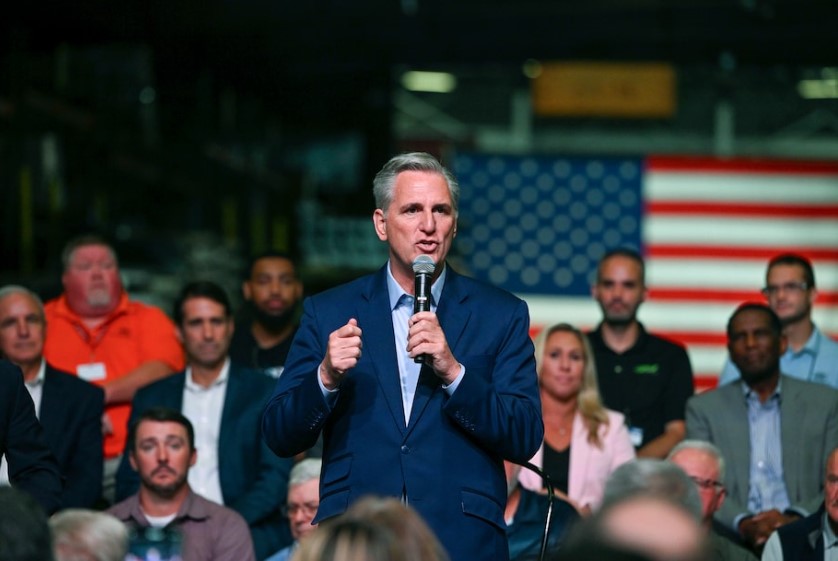 While they were trumpeting their “Commitment to America” on Friday, House Republicans might have told Americans more than they intended about what a GOP majority would mean and the forces it would answer to. But they also gave Democrats some tips about what’s coming their way.

Some of the awkward revelations during an event at a factory outside Pittsburgh came from friendly questioners, including a vaccine skeptic who won loud cheers. Even Rep. Jim Jordan (R-Ohio), a hero to the Trumpist far right, thought it wise to take a pass on that one, saying, “I’m not against the vaccines.” He pivoted quickly to boilerplate conservative victimhood, declaring that “the left may control everything,” but not “we the people.”

Rep. Lisa C. McClain (R-Mich.) made you wonder why she serves in government at all. “What does government produce?” she asked. “Nothing.” I guess we can forget about roads, bridges, schools, universities, water systems, health research, national parks and airports, among other things.

And lest anyone miss the fact that no extremist would be left behind in a new Republican order, the festivities were graced with the presence of Rep. Marjorie Taylor Greene (Ga.) — of QAnon, Jewish space lasers and charges about House Speaker Nancy Pelosi’s “gazpacho police” fame.

But her presence also explained why House Minority Leader Kevin McCarthy (Calif.) is quite proud of his Commitment to America. It’s so short on specifics that everyone in his caucus could sign on, and it brushes aside anything that might hurt a Republican House candidate.

You have to squint to find the only reference to abortion. It’s beneath a subhead of a subhead and amounts to nine vague words: a pledge to “protect the lives of unborn children and their mothers.” Somehow, I don’t think that’s a promise of universal prenatal care.

McCarthy doesn’t mind that he looks like a copycat, modeling his “Commitment” after the “Contract With America,” the 1994 document that presaged that year’s Republican landslide, which made Newt Gingrich speaker. In fairness, both parties are devoted synonym hunters when it comes to replaying their greatest historical hits. Democrats have long searched for words at both ends of the phrase “New Deal.” (See: Harry S. Truman’s “Fair Deal,” John F. Kennedy’s “New Frontier” and Bill Clinton’s “New Covenant.”)

Despite its reputation, Gingrich’s Contract did not win him his majority. But it did create some discipline in the ranks, keeping his candidates on more or less the same page. That’s what McCarthy is trying to do with a tense and obstreperous GOP caucus.

He might also have done his opponents a favor by signaling where his party spots Democratic weak points. What became clear as McCarthy and his colleagues spoke on Friday is that the GOP plans to wrap three issues — fears about China, problems at the southern border and fentanyl deaths — into one scary package. The logic: The fentanyl precursors go from China to Mexican criminal groups. Fentanyl crosses an allegedly porous border. It kills Americans.

Democrats should take the fentanyl crisis very seriously, even if McCarthy and his friends conveniently evaded the explosion of synthetic opioid deaths during Donald Trump’s presidency, from 19,413 in 2016 to 56,516 in 2020. The fact that the GOP is demagoguing the issue doesn’t make it any less of a problem.

And the Commitment’s promise of a “Parents’ Bill of Rights” in the schools suggests that the GOP’s surveys show a persistence of parental frustration with the difficulties created for kids during the pandemic.

Lori McRoberts, a mother of three and a self-described “Mama Bear,” complained to McCarthy about covid-19 protocols in the schools during the pandemic that, among other things, required children to wear masks and sit in a line. “They sat like prisoners during lunch,” she said, and then moved on to the dangers of “Marxist-style programs targeting our children.”

“Mama Bear to Mama Bear, I hear you,” Rep. Julia Letlow (R-La.) reassured her. Out of nowhere, just to make sure he got the unrelated issue of how to handle transgender students on the table, McCarthy used the question to blurt out a promise that no doubt polls well. “We should ensure women only compete in women’s sports,” he said.

Still, Democrats should note that you don’t have to be worried about “Marxist-style programs” or who competes in sports to be alarmed by falling test scores.

Here’s another thing the Republicans made clear: If they take the majority, they plan to use their power to harass the Biden administration with one hearing after another. Jordan was positively gleeful in describing the long list of subjects the GOP would investigate, urging voters “to make a change in our government so that we can hold those people who’ve been coming after us, hold them accountable like we’re supposed to.”

If you don’t think our politics are partisan enough now, just wait for Jordan, McCarthy and their friends. They really do have a commitment — to making Washington a pitiless battlefield.