The Pelosis and a haunted America 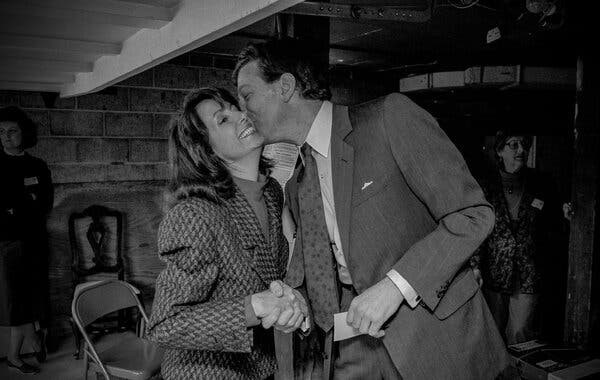 WASHINGTON — Halloween has always been my favorite holiday. I loved putting up twinkling bats and watching midnight monster-chiller-horror movies.

The world is too scary. Politics is too creepy. Horror is too real.

When I was a child, on Oct. 31, my older brother would put on a vinyl LP of Mussorgsky’s “Night on Bald Mountain” that he had carefully cleaned. The eerie music was used by Walt Disney in the segment of his animated masterpiece “Fantasia” about the surreal celebration of evil during the night of the witches’ Sabbath.

Chernabog, the lord of evil and death, wrapped in a dark cape, stands atop a jagged peak, summoning ghosts, witches and vampires to swirl out of the mountain and pay homage. I was so relieved when, at dawn, church bells rang and drove them off.

But now the bad spirits are lurking all around us. They will not be driven off.

America seems haunted by random violence and casual cruelty every day. In New York, subway riders getting pushed onto the tracks and innocent bystanders being shot. Officials across the country facing kidnapping plots, armed visits to their homes, assaults and death threats. No place seems safe, from parks to schools to the supposedly impregnable, guarded Capitol and homes of the wealthy and well known.

In some states, women — and girls — seeking abortions are treated as criminals. In Uvalde, Texas, terrified children frantically calling the police are slaughtered by a teenage psychopath with an AR-15-style rifle as 376 police officers lingered in and around the elementary school waiting for … what?

On Friday, The New York Post broke the news that someone I know, the former Obama official and former New York City Transit president Sarah Feinberg, was sucker-punched in the face in Chelsea by someone walking by in the bike lane.

Now comes news of a maniac breaking into a house in the middle of the night, bludgeoning an 82-year-old man in the head with a hammer while demanding to know where his famous wife was. Perfect Halloween movie fare. Except it actually happened.

One of the most macabre stories to come out of the Jan. 6 attack on the Capitol and democracy, ginned up by Donald Trump, was when the mob roamed the halls, pounding the speaker’s door with bloodcurdling taunts of “Where’s Nancy?”

Speaker Pelosi was not there, thank God. She was huddling with other top officials in a secure bunker, placing call after call for help that was slow to arrive.

Luckily, she was safe, in D.C. with her security detail, when a man broke into her Pacific Heights home in San Francisco early Friday morning. He smashed the patio glass door and attacked her husband, who struggled with the attacker for control of a hammer. In a tingly echo of Jan. 6, the man shouted at Paul Pelosi, “Where is Nancy? Where is Nancy?” When police arrived, the man said he was “waiting for Nancy.”

Mr. Pelosi, a genial investor who likes to star in amateur musicals and who has been married to Nancy for 59 years, called 911, The Times reported, bringing police to his home and potentially saving his life. He was hit several times on his hands and head with the hammer and was taken to the hospital for surgery for a skull fracture and is expected to recover.

The police said the intruder was David DePape, a 42-year-old from Berkeley, Calif. CNN reported that DePape’s relatives confirmed that a Facebook account spewing Trumpian conspiracies on topics ranging from climate change to Covid was his. In his posts, he cast doubt on the validity of the 2020 election — sharing pillow pusher and Trump lickspittle Mike Lindell’s absurd videos. And he defended the Trump rioters who stormed the Capitol.

With his usual level of class, Donald Trump put out a message of sympathy to the family of Jerry Lee Lewis, “the Killer” of rock ’n’ roll, who died Friday at age 87, but said nothing all day about the Pelosi family.

On Twitter, Adam Kinzinger urged G.O.P. candidates and elected officials to speak out against the “horrific” attack. He probably didn’t have in mind the sort of speaking out that Gov. Glenn Youngkin of Virginia did. Youngkin made a joke of the assassination attempt: “There’s no room for violence anywhere, but we’re going to send her back to be with him in California.”

Democrats had a nice run, on climate change and gun legislation, and enjoyed some backlash to the Dark Prince of the Supreme Court, Samuel Alito. Now Republicans seem set to win back the House, and maybe the Senate, with a range of incompetent and hypocritical candidates.

“I cannot believe anybody would vote for these people,” Pelosi told The Times’s Carl Hulse on a fund-raising swing.

But a feral mood has taken hold. If you think Washington is monstrous now, just wait.

Image Credits: Nancy and Paul Pelosi in 1987. They have been married for 59 years. Credit…Jim Gerberich/Associated Press