The politicization of SCOTUS 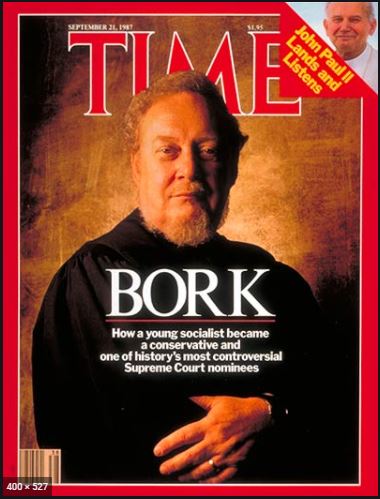 Republicans often say that the politicization of the Supreme Court of the United States (SCOTUS) started with Democrats’ 1987 rejection of President Ronald Reagan’s nominee to the Supreme Court, the ultra-conservative Judge Robert Bork because of his political views. I am old enough to remember, however, the Saturday Night Massacre which also likely played a very legitimate role in the rejection of Bork.

For those not as ancient as I am, on Saturday night, October 20, 1973, President Richard Nixon ordered Attorney General Elliot Richardson to fire the Watergate Special Prosecutor Archibald Cox who was investigating Nixon in connection to a break-in of the Democratic National Committee’s offices located in the Watergate complex. Richardson refused to fire Cox and Nixon fired him. Nixon then ordered Deputy Attorney General William Ruckelhaus to fire Cox. Ruckelhaus refused and Nixon fired him.

Bork later claimed that he intended to resign after he fired Cox but was dissuaded from doing so by Richardson and Ruckelhaus. But, a resignation after the firing falls far short of the standard of refusing to fire Cox set by Ruckelhaus and Richardson. To be fair, Ruckelhaus did later say he was glad Bork had acted, saying he was worried about the stability of the government.

Noteworthy also are claims that at the time, Nixon had promised Bork his next nomination to the U.S. Supreme Court. (Nixon never got a chance to nominate another Supreme Court Justice before he resigned.)

Bork denied he had acted illegally in firing Cox at his 1987 Supreme Court confirmation hearing before the U.S. Senate Judiciary Committee.  But, just 24 days after Bork fired Cox in 1973, a federal district judge had ruled his firing of Cox was illegal, a fact which Bork would certainly have been aware.

Robert Bork was certainly extremely conservative and out of step with the country’s views on many issues as well as our Declaration of Independence’s stated belief in the rights of all Americans:

“We hold these truths to be self-evident, that all men are created equal, that they are endowed by their creator with certain unalienable Rights, that among these are Life, Liberty and the pursuit of Happiness.”

On July 3rd, 2019 conservative writer George Will’s wrote a profound and relevant column on the importance of the Declaration of Independence in decisions of the Supreme Court. Read it here.

I have little doubt that, in addition to his conservative views, that Bork’s firing of the Watergate Special Prosecutor played a role in the rejection of his nomination to the Supreme Court. Bork was nominated to the Supreme Court just 13 years after Nixon’s resignation, so the taint of Bork’s association with Nixon would have been still fresh in people’s minds, especially among many Democratic senators.

So, even if you don’t believe Bork should have been rejected for his ultra conservative views, his firing of the Special Prosecutor and its goal of obstructing the Watergate investigation into Nixon’s corruption surely disqualified him from sitting on the U.S. Supreme Court.