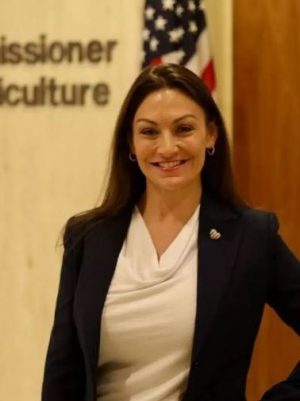 By Nikki Fried, a Democrat and Florida’s Commissioner of Agriculture and Consumer Services.

Editor’s note:  This is an August 27th article previously published at https://www.foxbusiness.com/economy/trump-economy-keeping-america-great

At this week’s Republican National Convention, President Trump is focusing on the economy as a way to distract from his scattershot response to COVID-19.

If Trump wants to talk about the economy, that’s fine — let’s start that conversation with the economy in America’s largest swing state, Florida.

It’s not a conversation he’ll want to have.

Florida’s economy is one of America’s biggest economic engines, with a gross domestic product of over $1 trillion.

Our state’s economy is built largely on tourism, attracting over 130 million people from around the world annually; those visitors spent $94 billion in Florida last year.

But because of COVID-19, tourism has ground to a halt in the Sunshine State, with a 60.5 percent drop last quarter — and it’s been made worse by President Trump’s erratic response to the virus. With massive losses in state and local sales taxes fueling a record $5.4 billion state budget shortfall, Florida’s economy is on the brink. And that’s before considering the 1.4 million Floridians suddenly out of work.

So what has Trump and his Republican allies, like Florida Governor Ron DeSantis, done to relieve the pressure on Americans and Floridians at this critical time?

President Trump foolishly rushed to reopen America’s economy while the virus threatened to spiral out of control — and some governors like DeSantis willingly followed his lead.

DeSantis prematurely reopened Florida with confusing executive orders, even jumping over White House reopening checkpoints, leading to slow-drip damage to our economy from which it will take years to recover.

While Trump and Republicans in Congress fought to reduce unemployment benefits — already too little to make ends meet — Florida’s government under DeSantis struggled to make basic payments to over a million Floridians waiting for desperately-needed help. This, while Florida last month led states in new unemployment claims, and the while the nation adds a million more unemployment claims each week.

Florida’s Republican-designed unemployment system is so broken, even the chairman of the Republican Party of Florida, Joe Gruters, suggested “someone should go to jail” over it.

On trade, President Trump loves to claim he’s putting Americans first with “the best” trade deals — but the truth, as usual, says otherwise.

His snub could cost Florida 8,000 farm jobs and up to $400 million in lost revenue. While Florida farmers deal with $522 million in COVID-19 losses, Trump’s USDA was slow to provide assistance, with financial aid capped at a single day’s loss for some large farms. And Trump’s inexplicable decision to allow imported citrus from China could devastate Florida’s signature $8.6 billion citrus industry.

Let me be clear: neither the president nor his Republican enablers are to blame for COVID-19. But they are complicit in a pandemic response that has failed the vast majority of American families.

And while Trump’s Wall Street top-one-percent buddies enjoy a record recovery, millions of working people are left wondering if Trump is truly making America great for them.

The truth is, as I said in last week’s Democratic National Convention keynote, it didn’t need to be this bad. More than 25 million Americans are unemployed. Families are struggling to pay for rent and groceries. Food banks are struggling to keep up with demand. Farms are struggling to find buyers for their crops. And we are more divided as a nation than ever when we must be united to defeat the virus.

Democratic presidential nominee Joe Biden has a plan that will help struggling small businesses and working families build back better.

He’s promised that no family making under $400,000 a year will face an increase in taxes.

Most of all, Biden knows that building back America’s economy means lifting up all Americans, not building up the wealthy on the backs of working and middle-class families.

When President Trump talks about the economy at his convention, Americans should remember something: he’ll neither make nor keep, America great for you.