Who are those people waving on Tamiami Trail? 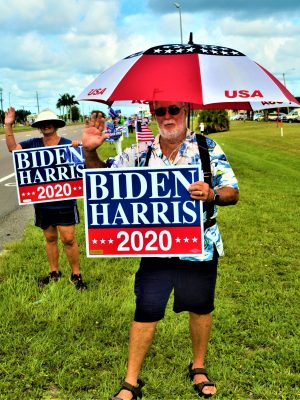 You may have seen us on Saturday mornings or Tuesday afternoons standing by the north side of Tamiami Trail in Port Charlotte. We’re wearing blue or sometimes crazy apparel, holding Biden-Harris, David Jones or Allen Ellison signs (occasionally all three!) and rigorously waving. Frequently we receive an appreciative honk and thumbs-up.

Each week our number grows.

Ever wonder who we are and why we do it so enthusiastically?

We are the Blue Wave of working and non-working, young and retired, white people and people of color who have decided that waiting until November 3rd is too late to express our horror of this administration’s atrocious attacks on democracy.  Many of us are parents, grandparents, students, teachers, first-responders, medical professionals, and others from different walks of life.  What we all share is a realization of the urgent need to end the reign of the current administration and to elect Joe Biden as the President of the United States.

So, why do we leave our homes on a Saturday or Tuesday and stand in the hot August sun by the side of a busy road?

Take a look at the reasons why some of us are here:

Democrat Georgina R. is 54. Passionate about reinstating decency to the presidency, she was not politically active until now.  Georgina supports the entire democratic platform and emphasizes, “this is Trump’s America…all of the unrest, lack of transparency, violence, and destruction.” After a recent trip abroad, she heard from many Europeans about “our accidental president and how everyone was laughing at America.”

A Texas transplant,  Karen A. is 64 and upset regarding the current accelerating racial unrest. She states:  “Trump just doesn’t care about unrest or anything affecting Americans.  He loves Russia…all he and his tribe in the Senate care about is money and power…not us.”

Her husband, Dennis age 66, is frustrated with the lying, hypocrisy and spending…” we have a fake president who is destroying our economy by blowing up the national debt and initiating trade wars.”

Mike and Cate S., ages 51 and 52 respectively, recently switched party affiliations from Republican to Democrat. Mike, a financial planner and former Marine, voted for Trump in 2016 but proclaims: “we must get rid of Trump now! His total lack of response to Putin’s bounties on the heads of our fighting soldiers is unacceptable… our veterans deserve respect. And, as a finance professional, I feel we are owed a look at Trump’s tax returns.”

Awarded a Purple Heart for his valor in Viet Nam, Democrat Roderick B. explains: “We now have a cult leader and I am fearful we will have a fascist government under another Trump term.” Roderick is astonished that Trump has never visited any of our troops currently serving in war zones.

Paulette P., a health care worker had just left work and noticed the signs. She decided to stop in the office to change her voter information. Paulette emphasized: “Enough is enough…the lying, deception and double standards on issues are just too much.  It’s not just HIM but the hypocrisy of his entire party…they act like they are American royalty.”

Democrat Marylin B., aged 60, has felt the ugly impact of racism first-hand right here in Charlotte County.  Her husband is black and they have a bi-racial son. Stopped for no reason and questioned by police while visiting friends in an upscale neighborhood, Marilyn maintains “we have had enough…not only the racism practiced and condoned by this administration and others but also the lies and deceit.”

These are just a few profiles of the many of the Blue Wave.

But Blue Wave people are not the only ones showing up. Many drivers lend their friendly honks and “thumbs up” while other drivers are barricaded by steel in sign-laden, flag- bearing cars, and giant trucks filled with non-mask-wearing opposers.  These opposers only strengthen our resolve to stand unshielded with our feet firmly planted on the ground of democracy.

Stop by the office, pick up a sign, and stand with us. We are Democrats, disillusioned Republicans, and Independents issuing you an invitation.

You’ll love the honks and camaraderie!