Wasserman Schultz on Proud Boys controversy: ‘Plain and simple, I think Donald Trump is a racist’ 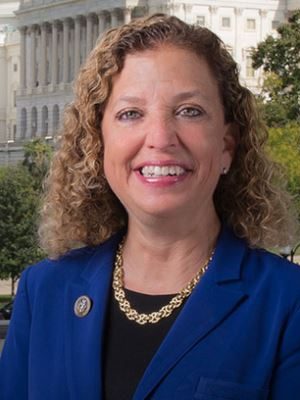 Editor’s note: the following is an excerpt from an article appearing in the South Florida Sun-Sentinel on October 1st. By ANTHONY MAN

U.S. Rep. Debbie Wasserman Schultz, the prominent South Florida Democrat, said Thursday that President Donald Trump is a racist and his racism is clearly “embedded within him.”

Wasserman Schultz made her comments during a video news conference held by the three Jewish members of Congress from Florida. They joined to condemn Trump for his reluctance to denounce white supremacism — something they said he embraces — and his signal of support to the violent, far-right Proud Boys organization to “stand back and stand by.”

Wasserman Schultz, and U.S. Reps. Ted Deutch and Lois Frankel, also Democrats, represent parts of Broward, Miami-Dade and Palm Beach counties. They have never been fans of Trump, and they have criticized in the past what they’ve seen as tacit endorsements of anti-Semitism.

But they said Trump’s comments during and since the presidential debate Tuesday night forced them to speak out about that they said is a troubling, and especially egregious, continuation of a pattern.

Still, in response to a question during the news conference, none termed Trump a white supremacist.

Wasserman Schultz was the most direct: “Plain and simple I think Donald Trump is a racist. I think he’s repeatedly demonstrated he’s a racist. You have only to listen to what he said on Tuesday night and what he said repeatedly throughout the peaceful protests that have been occurring around the country following the George Floyd murder. I think his actions and his words point to the racism that is I think embedded within him.”

Dennard is the author of Trump’s “record of results for the Black community” on the Republican National Committee’s website.

In the news conference, arranged by the Biden campaign, Deutch pointed to Trump avoiding condemnation of white supremacists during the debate.

“The president was asked a very specific question. And it’s the easiest question for anyone who represents citizens of the United States in government to answer. Do you condemn white supremacists? Do you condemn white supremacists and racists and anti-Semites? It’s the easiest question to answer, and he wouldn’t do it,” Deutch said.

“So that’s what matters to me. That’s what should matter to voters. I don’t need to explore exactly how Donald Trump feels. We need to look at what he does and what he says and what he encourages. And that’s what ought to concern all of us.”

Frankel pointed to Trump actions — “putting immigrant children into cages” and “how he has handled COVID,” which has had a disparate impact on minority communities — both of which she said are racist.

Deutch said Trump’s “stand back and stand by” message is encouraging violence by white supremacists. “That’s not a mistake or a misstatement.” Frankel said the Proud Boys is a terrorist organization.

The Anti-Defamation League, which also condemned what Trump said during the debate, has labeled Proud Boys violent, nationalistic, Islamophobic, transphobic and misogynistic, something the organization denies.

Proud Boys members welcomed the recognition from Trump in their social media accounts, evidence, Wasserman Schultz said, that “The Proud Boys didn’t mess the message from Donald Trump. They heard a rallying cry.”

Wasserman Schultz said it is “frightening” that Trump is willing to “embolden the forces of white supremacy. We face a real and serious threat of domestic terrorism in this nation. We’ve seen it over and over and over again. And we’ve experienced it in the Jewish community in particular.”

And, she added, “Donald Trump only wants to pour gasoline on that fire.”

A Trump spokesman said the president had condemned white supremacists. But the only black Republican member of the U.S. Senate, Tim Scott of South Carolina, said Wednesday he thought Trump “misspoke” and should correct himself. But, he added, “If he doesn’t correct it, I guess he didn’t misspeak.”

Thursday’s call also included Rabbi Mark Winer, president of the Florida Democratic Party’s Jewish and faith-based caucuses. Like the others, he condemned anti-Semitism, racism, misogyny, Islamophobia and homophobia. Those threats, he said, are “very real.”

Winer, who lives west of Boca Raton, said it is “no accident” that Trump’s rise to power has been accompanied by an increase in violent anti-Semitic attacks in the U.S. Winer added that he doesn’t think Trump is an anti-Semite. “But what he is, is he’s an enabler of anti-Semitism. He may not be an anti-Semite, but he tills the soil and he sows the seeds of anti-Semitism.”

Winer is a former president of the National Council of Synagogues and former director of the Center for Ecumenical and Interreligious Studies of St. Thomas University in Miami Gardens.

Deutch and Frankel said the president is trying to make people worried about the possibility of violence when they go to vote, in an attempt to suppress the votes of people who don’t support him, and pull off a win.

They said that they had confidence that supervisors of elections and law enforcement in South Florida would ensure people will be safe when they vote. Frankel and Wasserman Schultz urged people to request mail ballots if they haven’t done so, and to mail them back soon.

Anthony Man can be reached at aman@sunsentinel.com or on Twitter @browardpolitics