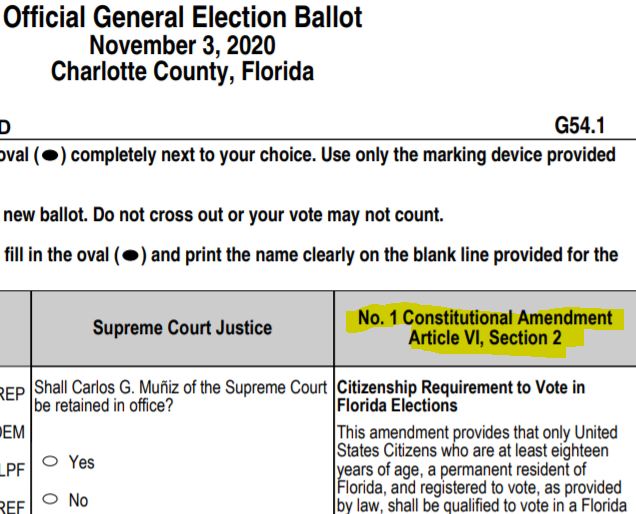 At the monthly DEC meeting on September 14th, vice-chair Nancy Razvoza presented the six amendments that will appear on the November 3rd, 2020 Florida General Election Ballot.   Vote by Mail ballots  are being mailed to voters as of September 24th, hence the following information may be timely and beneficial.

The Executive Board recommended voters:

Abstain on Florida Amendment 1, the Citizen Requirement for Voting Initiative. This amendment purports to restrict voting in Florida to US citizens – but Florida law already restricts voting to US citizens. Rationale – Only US citizens can vote currently.  Amendment 1 will have no legal impact to voting in Florida as only citizens can legally vote here already. It would basically make a slight but nuanced tweak to Section 2 of Article VI. Therefore, we take no position.

The South Florida Sun-Sentinel wrote: “ Amendment 1 is another example of dark money trying to manipulate our Constitution…It is political clickbait offered up by wealthy friends of President Donald Trump to echo his anti-immigrant agenda and lure like-minded voters to the polls…It is reprehensible for them to be tampering with Florida’s Constitution, promoting an unnecessary amendment, for such transparently political purposes.”

The state constitution currently states: “Every citizen of the United States who is at least eighteen years of age and who is a permanent resident of the state, if registered as provided by law, shall be an elector of the county where registered.”  Amendment 1 would change the word “Every” to “Only a.” So, if passed, the amended state constitution would read “Only a citizen of the United States…

Vote YES on Florida Amendment 2, the $15 Minimum Wage Initiative. This amendment would gradually raise Florida’s minimum wage to $15 an hour by September 2026. Rationale – Hourly wage workers need our support, especially during this time of unemployment, layoffs and furloughs. As the Orlando Sentinel wrote, “We can think of no better expression of support for essential workers than by agreeing they should have the dignity of a job that pays something akin to a living wage.”

Vote NO on Florida Amendment 3, the Top-Two Open Primaries for State Offices Initiative.  This amendment would turn Florida’s primary elections into a top-two “jungle” primary system in which all candidates, regardless of party, appear on the same primary ballot, and all registered voters can vote.   Rationale – This amendment would make it possible for only Republicans to appear on your ballot in the general election. In 2018, for example, the top two in the Florida gubernatorial primary were DeSantis & Putnam.  Former state Rep. Sean Shaw’s nonprofit People Over Profits has found, “this system will make it much harder for minority candidates to win legislative races,” as reported in the Tampa Bay Times. While we support opening Democratic primaries to be inclusive of nonpartisan voters, “jungle” primaries are not the answer.

Vote NO on Florida Amendment 4, Require Constitutional Amendments to be Passed Twice Initiative. This amendment would require that that ballot amendments be passed not once but twice – in two subsequent elections – with 60% of the vote.  Rationale – We had 14 Amendments in 2018. If this Amendment passes, we would be voting again on all the Amendments in 2018 that passed two years ago. Amendment No. 4 would make the already formidable process of amending the Florida Constitution all but impossible, except for corporations and the super-rich.

Vote YES on Florida Amendment 5, Extend “Save Our Homes” Portability Period Amendment.  This amendment would increase the period in which accrued Save Our Homes benefits can transfer to a new homestead from two to three years.   Rationale – Taxes are paid on a Calendar Year basis, so you do not really have 24 months to transfer homestead benefits from one home to another.  If you sell a home in Dec 2020 and you do not settle on your new home before January 1, 2022 you would not receive homestead transfer.

Vote YES on Florida Amendment 6, Homestead Property Tax Discount for Spouses of Deceased Veterans Amendment.  This amendment would transfer a veteran’s homestead property tax discounts to their surviving spouse who lives in the home, “until he or she remarries or sells or otherwise disposes of the property.  Rationale – The amendment would carry homestead property tax discounts over to a surviving spouse who owns the home and lives in it.

To view the Indivisible Florida recommendations for Amendments 1 to 4, please click here.

Image Credits: Charlotte County Supervisor of Elections
Facebook
Twitter
Email
PrevPreviousWasserman Schultz on Proud Boys controversy: ‘Plain and simple, I think Donald Trump is a racist’
NextTrump may not be a tax fraud, but he is an utter business failure!Next