What to know about Ron DeSantis’s political ‘election fraud’ arrests 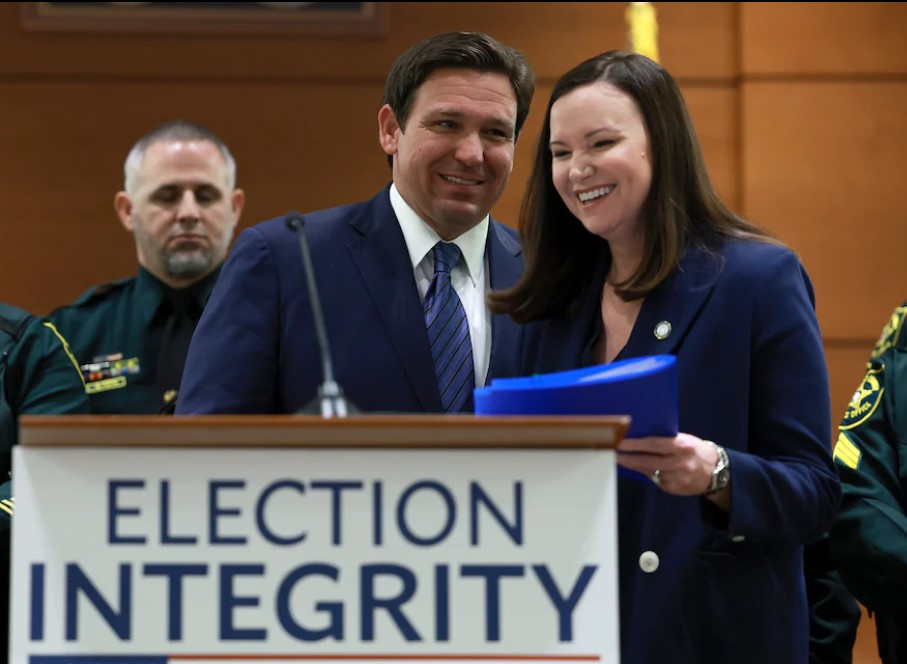 When they went to the polls in November 2018, Florida voters made two choices. They narrowly selected Rep. Ron DeSantis (R) to serve as their governor. They also overwhelmingly decided to grant felons the right to vote by a nearly 2-to-1 margin.

The passage of Amendment 4, the Voting Rights Restoration for Felons Initiative, was not the end of that particular fight. Even before he took office, though, DeSantis called for legislation that would constrain implementation of the seemingly straightforward policy. In June 2019, the new governor signed a bill that mandated that felons be enfranchised only after they had repaid any outstanding fines or fees they owed.

This is trickier than it sounds, both because of the direct cost of making the payments and because of the way in which those fees might have been assessed. It was often hard for those subject to the law to determine what they owed.

“Florida has no centralized database to allow people to figure out what legal financial obligations they owe to the state,” ProPublica explained last month. “Instead, its 67 counties and various state agencies each maintain their own databases.”

The law was challenged in court, with opponents arguing that it amounted to a modern poll tax. In September 2020, shortly before the first election in which those individuals would have been able to vote, a federal appeals court ruled that the pay-your-fees stipulation could stand.

The problem was that a number of people covered by Amendment 4 had already registered. That ProPublica article details the case of Kelvin Bolton, who had registered while in jail. A county elections official came and told prisoners they could register, so he did. He doesn’t remember being told that he needed to pay off any fines so, when he voted in the November election, he was unwittingly committing another crime.

ProPublica found 10 examples of people similarly affected: told they could register to vote and then doing so — and ending up with criminal charges.

Those 10 cases probably don’t overlap with the 20 announced by DeSantis in a campaign-style event on Thursday. The governor — up for reelection this year and with an obvious eye toward the 2024 Republican presidential primary — declared that a new “election fraud” arm of state law enforcement had identified 20 potential violations of state voting laws.

Each was a felon.

“All 20 of these individuals were disqualified from voting after they were convicted of murder or a felony sexual offense,” the governor’s office said in a statement, “but they chose to vote anyway, and now they have all been charged with voter fraud — a third-degree felony punishable by up to a $5,000 fine and up to 5 years in prison.”

That “murder or felony sexual offense” stipulation is important: Amendment 4 excepted people convicted of those crimes from being granted the right to vote. But it’s also easy to see how the confused process of implementing the amendment might have increased the chances of unwitting violations of the law.

It’s critically important to put this into context. Attendance at DeSantis’s announcement was restricted, with “a woman who identified herself as a volunteer with the Palm Beach County Republican Party” monitoring who was allowed to enter the room, according to Washington Post reporting. Just as DeSantis was aware of the political utility of announcing the creation of the “Office of Election Crimes and Security” earlier this year, in the midst of ongoing agitation on the right over the specter of rampant voter fraud, he is aware of the utility of standing at a lectern and announcing that purported criminals had been found.

Mind you, this is 20 voters out of more than 11 million who cast ballots in the state that year.

And this isn’t “voter fraud,” as such. An operating theory of Republican politics in the Donald Trump era has been that there’s a rampant effort to cast votes illegally on behalf of unwitting actors. This is people casting votes on their own behalf who are simply having their votes thrown out. It is to “election fraud” what overstaying a visa is to “illegal immigration.”

Most importantly, the allegations being made are just that: allegations. There have been multiple examples in recent years of states making splashy announcements about fraud only to have those allegations wither. Skepticism is warranted here particularly given DeSantis’s track record of hyping culture-war victories that turn out to be little more than the hype itself.

There has been actual voter fraud alleged in Florida. Four people who live in the conservative, senior-oriented community of the Villages have been arrested for committing fraud. DeSantis did not hold a press conference to celebrate that triumph of law enforcement.

That clarifies another particularly revealing aspect of the governor’s announcement. The subtext to much of the fretting over purported illegal voting is that it’s the wrong people who are casting ballots, which is clearly what DeSantis wants to highlight. In Wisconsin, for example, a focus of allegations about election “rigging” was that systems were implemented making it easier for people in low-turnout areas — cities, places with larger non-White populations — to cast a ballot. The backlash against Amendment 4 had some obvious grounding in worries that those new voters would vote for Democrats — in part because they were disproportionately Black.

This week brought related news on that front. The Justice Department argued in a court filing that a law DeSantis signed last year restricting voting access included “provisions that impose disparate burdens on Black voters” — provisions “chosen precisely because of those burdens to secure a partisan advantage.” The filing was offered as an appellate court evaluates whether a lower-court ruling that the law is discriminatory should stand.

What DeSantis wanted from his event on Thursday was for the media to elevate his assertion that he’s taking a hard-line position against fraud. What he demonstrated most effectively, though, is how he has repeatedly taken steps that restrict voting access despite the undeniably minor frequency of fraud in Florida elections (as he himself has pointed out).

And, of course, that he is keenly interested in telling the conservative ecosystem exactly what it’s hoping to hear.