The Florida Democratic Party has asked a federal judge to order a further delay in the selection of a candidate to replace April Freeman as the party’s nominee for the open seat in the 17th Congressional District. Arguments were scheduled for noon today at U.S. District Court in Tampa on whether candidates who sought a different

Nelson and Gillum leading in their respective Races

Bill Nelson leading Rick Scott by 4 points in latest poll The turnaround may be real for incumbent Democratic U.S. Sen. Bill Nelson, as he is leading Republican challenger Rick Scott in yet another poll. The newest Public Policy Polling survey puts Nelson up 4 points against Scott, the outgoing Florida Governor. (Read more in FloridaPolitics.com) Another poll, another lead

Five years ago, the federal government shut down. And on Monday, three Florida Democrats reminded Florida media of Ron DeSantis‘ role in “masterminding” it. DeSantis, now the Republican nominee for Governor, was in his first term representing Florida’s 6th Congressional District at the time. And he and his Tea Party colleagues were uniquely positioned to exact 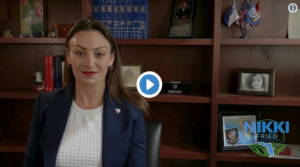 Nikki Fried to NRA: ‘I won’t be beholden to you’

Nikki Fried, the Democratic candidate for the state’s Commissioner of Agriculture and Consumer Services, sent a clear message to the National Rifle Association Monday morning: “I won’t be beholden to you.”

The message comes in the form of a signed letter to NRA lobbyist Marion Hammer. Fried says the letter was prompted by a Tampa Bay Times report that unveiled emails exchanged between Hammer and officials within the agriculture commissioner’s office.