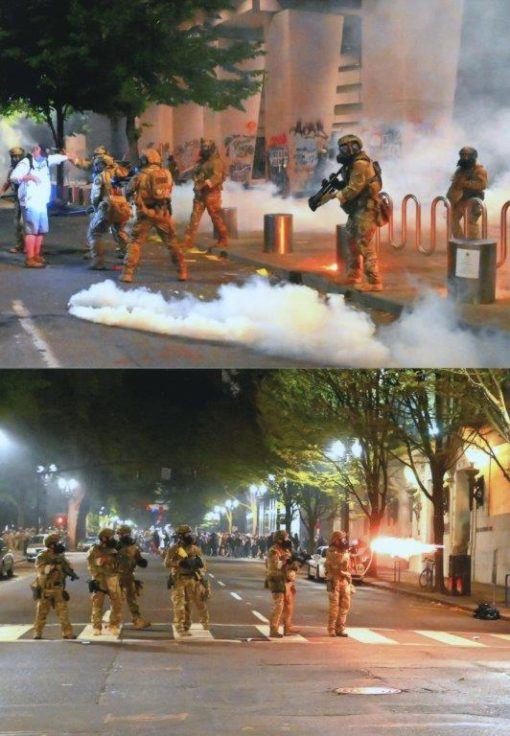 The photos above were taken by Mike Hastie who served as an Army Medic in Vietnam and who has been on the ground in Portland, Oregon for weeks. The man in the top photo is Christopher David, a 53-year-old Navy veteran and a graduate of the U.S. Naval Academy.

The photos show federal agents clad in camouflage and tactical gear who beat and tear gassed peaceful protesters, including Mr. David, and pulled others into unmarked vehicles for questioning and threat of arrest. This is not an assisting force in cities like Portland; it’s an occupying army and political theater sanctioned by the President of the United States.

What’s really going on is that this president is looking for and  hoping for confrontation with the objective of winning political points in red states.

And to justify what has been done, the acting secretary of Homeland Security casts the protesters as violent anarchists and declares he will take these tactics nation-wide. Homeland Security is also using the cover of property damage to defend intelligence gathering against American citizens for peacefully protesting the government.

Reluctantly, I was personally involved in the establishment of Homeland Security after 9/11. Coupled with the PATRIOT Act, Homeland Security consists of all federal law enforcement and intelligence agencies. With Donald Trump as president, the agency has become a tool of the white supremacist criminal gang that this president represents.

The president is baiting demonstrators, and when they react to police violence, the lap-dog conservative press is there to convince the American people that the demonstrators are the bad guys and the police are the good guys. The aim is to reshape public opinion that these violent protests are being committed by mobs and thugs.

Americans have had enough and are marching for justice in record numbers. They are responding to generations of police brutality and systemic racism, apprehension fueled by a pandemic and an economic crisis that have hit Black Americans disproportionately. A mass movement has come together to say: we’ve had enough!Image Credits: Mike Hastie