DeSantis and Crist return to region 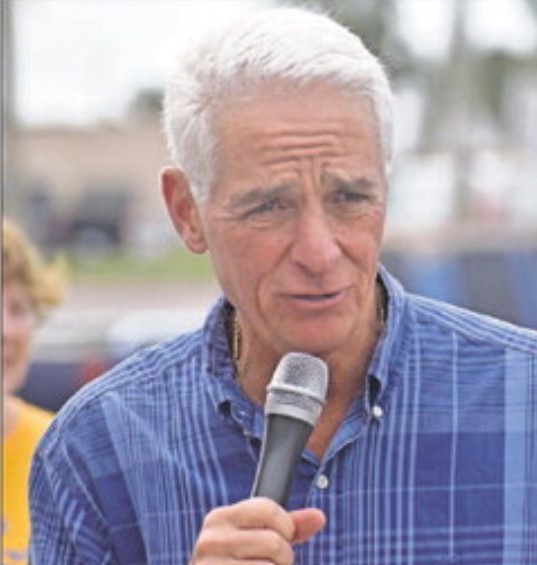 DeSantis visited a Disaster Recover Center on South McCall Road in Englewood, just outside a Home Depot store. The site was set up by FEMA to host a number of relief services, including meal distribution and applications for disaster-related aid.

DeSantis was accompanied by his wife, Casey DeSantis, and their 4-yearold son Mason, who had the day off from school for Columbus Day.

Crist, meanwhile, made a stop at the Charlotte County Democratic Club along Tamiami Trail. 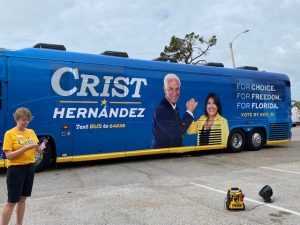 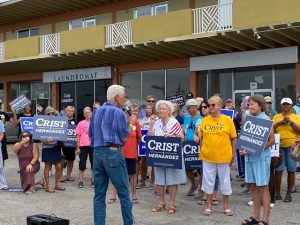 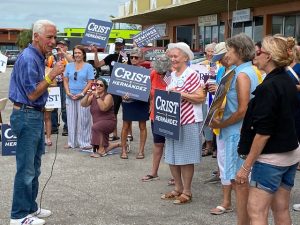 Arriving in his campaign bus, Crist also brought additional supplies to donate to local food banks. Local volunteers also brought in donations and distributed them to people passing by who asked for assistance.

Roxanne Moore, president of the Charlotte County Democratic Club, said her organization provides food donations to four local churches. The club makes donations four times a year and moved up their next donation to meet the need after Hurricane Ian.

Crist thanked attendees at the event for their generosity to their neighbors, as well as their support for his campaign.

DeSantis noted work continues to provide relief and repairs on Pine Island and Sanibel Island in Lee County. While repairs have already begun on the causeway bridge leading into Sanibel, workers have already been landed on the island to begin relief in tandem with the bridge work.

“That will be done in relatively short order,” DeSantis said.

Patronis and DeSantis drew particular attention to the ongoing relief efforts in the Florida Panhandle four years after Hurricane Michael, and promised Southwest Florida that similar long-term aid would be coming for them.

“And I promise, every single day, it’s gonna get better,” said Patronis, himself a Panama City native.

Casey DeSantis noted $41 million had been raised so far through the Florida Disaster Fund, through roughly 60,000 individual donors.

Of that amount, $1 million is already slated for disbursement to groups on the group like Operation Rubicon.

Gov. DeSantis also spoke about his decision to activate the Small Business Emergency Bridge Program. The program will provide $50 million for no-interest loans, to allow small businesses to rebuild after the hurricane.

According to the governor’s office, $10 million of that fund is set aside for small farms in Florida agribusiness.

DeSantis announced at the news conference that $2.5 million had already been awarded to a total of 55 businesses across the affected areas.

Back at Tamiami Trail, Crist criticized DeSantis’ administration for the state government’s inaction on rising insurance costs — a problem that may become more acute in the wake of Hurricane Ian.

Crist, who previously served as governor as a Republican, said DeSantis’ special legislative session on insurance costs failed to provide relief for Floridians. He contrasted that session with his own special session on the same topic early in his previous term, where prices were lowered.

“Florida deserves better than what we’re getting now,” Crist said.

Andrea Doria Kale, Democratic candidate for Florida’s 17th Congressional District, shared Crist’s concerns about insurance. A North Port resident, she recently feuded with an insurance company who denied her claim after her home was flooded. 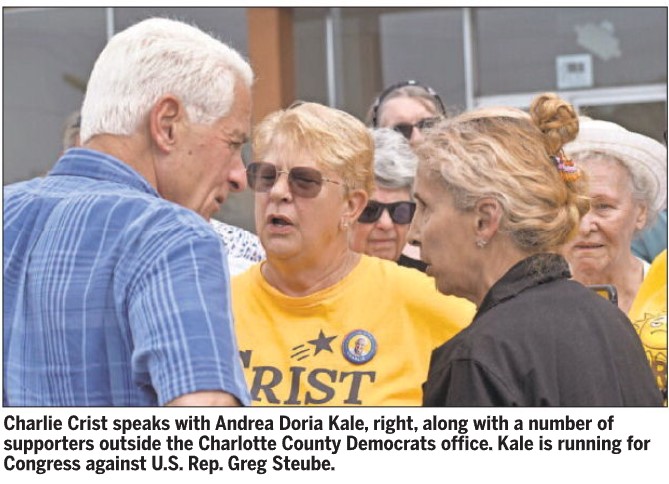 She added the stress of seeking repairs herself has impacted her ability to campaign.

Residents can visit the DRC site at 12621 S. McCall Road, Englewood, or at the FEMA Disaster Recovery Center at Shannon Staub Public Library, 4675 Career Lane, North Port, to register with FEMA and state agencies for a variety of post-disaster services.

Image Credits: Charlie Crist criticized Gov. Ron DeSantis for inaction on insurance costs before Hurricane Ian — along with other issues on Monday at a Port Charlotte event. SUN PHOTOS BY FRANK DIFIORE

Facebook
Twitter
Email
PrevPreviousIs what I hear true? Does it matter?
Next9 tips to debunk false claims made by friends and familyNext