How Trump motivated her 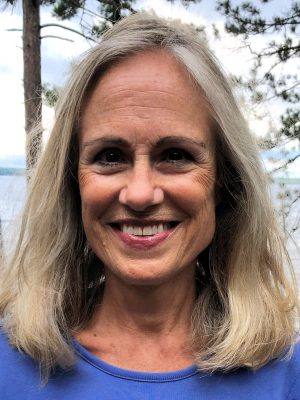 Editor’s note: This is the first in a DEC Profile series, Influencers, by Linda Conklin,  a Charlotte County Dems writer.

Influencer: Someone who has the power of influence does not demand, argue, persuade, or mandate that we see the world through their looking glass. Instead, it is when they share their experience, knowledge, and passion.

Meet Linda DeMeritt, Chair of the Charlotte County Democrats Precinct Coordinating Committee (PCC). A lofty title, but this is nothing new for Linda.  She was in the top 1% of her high school class, a Fulbright Scholar, Professor of Modern Languages, Provost at Allegheny College in Meadville, PA, and author of five books and more than 40 articles. These accomplishments were achieved by a woman who grew up in the ’60s and early ’70s when women with career aspirations were first able to dream beyond the more traditional choices of becoming teachers or nurses.

Linda wanted to break barriers. Because of her academic prowess, her parents and teachers expected a lot from her. But it was her self-expectation that mattered. She followed her passion for German literature and culture, earning a B.A. at Michigan State, where she spent her junior year studying abroad in Germany. She then earned an M.A. at the University of Illinois and was awarded a Fulbright Scholarship to study in Austria before starting her doctorate at Michigan State, where she earned her Ph.D. To support herself, she became a Graduate Teaching Assistant and learned that she loved teaching! Watching students discover, observing “aha” moments, was inspiring. And contact with students provided the perfect balance for the other half of her responsibilities as a college professor – research.

For 24 years, she taught at Allegheny College and then became VP of Academic Affairs (Provost) from 2003-2015, the first and only woman to serve in this role during Allegheny’s 205-year history. She did indeed break barriers!

Linda and her husband became Port Charlotte residents in the Fall of 2016. Linda knew that in retirement she wanted to volunteer, but she did not know how or where.  That all changed when Donald Trump was elected. Linda’s husband suggested they watch the inauguration speech together. Reluctantly, she sat down. After two sentences she got up, jumped into her car, drove to the Charlotte County Democratic Party office, and volunteered.

She soon became a Precinct Captain (PC). During the summer of 2017, she made over 2,000 calls looking for more PCs. Slowly the group grew into a real team, led by Linda and two Co-Chairs, Penelope Mayer and Larry Kuranowicz. Although she had never been involved in political organizing, this Leadership Team developed a handbook, an organizational structure, training sessions in voter outreach, a timeline, and much more.

While PC members currently fluctuate between 50 to 70, Linda is always looking for additional PCs and suggests candidates start by volunteering with a phone bank.

Since January 2019, the PCC has prepared for the November election by signing up voters to Vote By Mail (VBM). VBM is the safest and most secure way to vote, and it also significantly increases voter turn-out. Thousands of calls have been made and texts sent, 5,300 postcards mailed, and hundreds of doors knocked. By the end of June 2020, more than 15,000 Dems in Charlotte County were enrolled in VBM.

In August, the PCC will focus on precincts with a significant number of Hispanic voters. PCs and volunteers will “drive and drop” literature at Dem doors to encourage VBM and build a stronger connection to the Democratic Party.

Linda has always been a Democrat. As a teenager in the turbulent 60’s and 70’s, she had a front-row seat to battles over civil and women’s rights. As a female professor in the male-dominated world of academia, she confronted discrimination, and as provost, she observed first-hand the negative bias minority candidates faced in hiring. It is through these personal experiences that she has empathy for anyone facing such struggles.

Watch Linda Demeritt explain why she is a Democrat, address public education, and encounter racial discrimination.