Is Charlotte County a hotbed of anarchy? 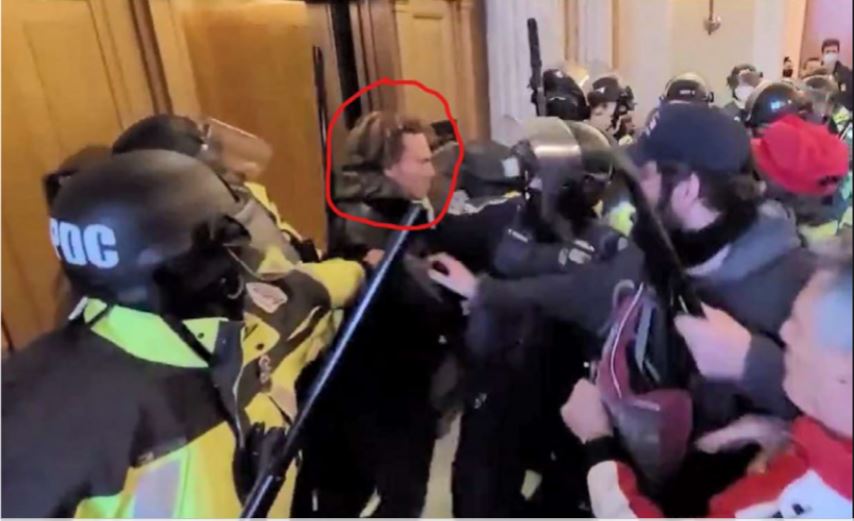 A Punta Gorda man is accused of conspiring to breach the U.S. Capitol on Jan. 6.

David Moerschel, 43, is the 18th member of the Oath Keepers organization to be arrested in connection with the riots, the Washington Post reported. He was charged with obstruction of justice/Congress, conspiracy and unlawful entry into restricted buildings or grounds. 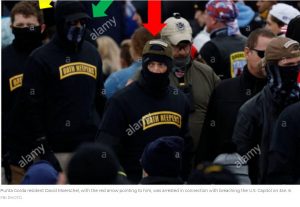 Moerschel was part of a group captured on video in a military-style “stack” formation, wearing helmets, reinforced vests and clothing with the Oath Keepers’ logo and insignia, moving through a crowd toward the doors of the Capitol, according to charging documents.

One of them wore a badge displaying the Oath Keepers’ motto — “Not on our watch” — and a statement: “I don’t believe in anything. I’m just here for the violence.”

The “stack” managed to break into the Capitol, smashing glass window panes and causing more than $1,000 in damage to the doors. Surveillance video showed the group, still in “stack” formation, moving through the building.

FBI investigators used phone and credit card records to connect Moerschel to a “quick reaction force” that was on standby to travel to the Capitol, possibly while armed.

Moerschel, under the username “Hatsy,” allegedly participated in encrypted Oath Keepers’ group chats on the Signal app labeled “OK FL DC OP Jan 6.” Moerschel wrote to one user: “We have your bag, We will leave it with Kane at the QRF. We are en route there now.”

Moerschel also made a credit card payment to Oath Keepers Inc. in September.

Investigators believe the Oath Keepers used the Comfort Inn Ballston in Arlington, Virginia, from Jan. 5-7 to store weapons, and that members referred to it as the “QRF hotel.” Surveillance video shows a man who appears to be Moerschel, wearing a long black jacket, and two other men wheeling a concierge cart with a black duffel bag and at least one long gun case into an elevator.

Brian Glenn Bingham, of Port Charlotte, has been arrested in connection with the Jan. 6 breach of the U.S. Capitol, according to the U.S. Department of Justice.

Brian Glenn Bingham, 35, who also has an address in New Jersey, was charged Tuesday with federal offenses that include assaulting, resisting or impeding certain officers; obstruction of law enforcement during civil disorder; and violent entry and disorderly conduct on Capitol grounds, among other charges.

Bingham will make his initial court appearance June 23 in the U.S. Attorney’s Office for the Middle District of Alabama.

The Jan. 6 insurrection disrupted a joint session of the U.S. Congress to count electoral votes in the presidential election.

Bingham was among the protesters at the U.S. Capitol, entering the building through the east front doors around 2:42 p.m. after they became unsecured, according to court documents.

Surveillance video from inside the Capitol building shows Bingham engaging police in a physical altercation around 2:55 p.m.

As police tried to push the crowd out of the building, Bingham confronted an officer and appeared to shout at him.

As officers continued to push Bingham toward the doorway, he appeared to throw a punch or shove the officer.

Additional footage — video taken by another rioter and body-worn camera footage of two Metropolitan Police Department officers — show similar activity from the doorway of the Capitol building where Bingham can be seen grabbing at and pushing the officer.

In the officer’s video, Bingham can be heard shouting at officers, “You won’t hurt ANTIFA, but you’ll murder innocent girls,” and “Where do you want me to move? Push me again.”

Bingham’s photo was included among bulletins issued by the FBI to identify suspects in the Capitol breach. Tips led investigators to Bingham’s Facebook and Instagram pages.

After obtaining a grand jury subpoena and search warrant, investigators were able to confirm Bingham’s Facebook account, which had been closed around Jan. 22.

They uncovered photos, videos and posts made to the account during the Capitol riot.

In Bingham’s Facebook records, investigators found a video taken from inside the Capitol on Jan. 6, showing rioters marching through the building.

Bingham had posted the video to his Facebook page around Jan. 7 with the caption, “The door was open and we walked in and didn’t break anything, the girl was killed inside door at right at the end of video You decide? Telling people to be peace as we walk in, hmm.”

Investigators also found an exchange between Bingham and another individual later in the day of Jan. 6.

The individual asks Bingham if he is OK.

Bingham responds: “I got to mandhandl(e) 5 cops and live to tell.”

Bingham wrote, “There was one scuffle that I got in between the one cop and the crowd, he was being dirty. I said, ‘It ain’t worth it, they are about to swarm you for hitting the wrong guy’s eyeball’ then a buddy cop grabbed him and they walked off.”

The case is being prosecuted by the U.S. Attorney’s Office for the District of Columbia and the DOJ National Security Division’s Counterterrorism Section with assistance from the Middle District of Alabama.

In the 150 days since Jan. 6, approximately 465 people have been arrested on charges related to the Capitol breach, including over 130 individuals charged with assaulting or impeding law enforcement. 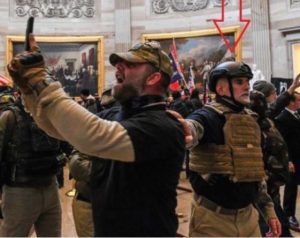 Young is the first of 16 reported Oath Keepers to enter a guilty plea and agree to cooperate with federal prosecutors, according to a release from the U.S. Department of Justice.

In a hearing, Young, pleaded guilty to two counts of conspiracy and obstruction of an official proceeding, both are felonies. The second charge calls for up to 20 years in prison.

However, U.S. District Judge Amit Mehta said federal sentencing guidelines call for Young to serve between 5¼ years and 6½ years behind bars. Prosecutors could recommend even less time in exchange for his cooperation against other defendants.

Young, who went by the call name “GenXPatriot,” agreed to cooperate, prosecutors say.

Young was one of 16 right-wing Oath Keepers militia members arrested after the attack on the Capitol, according to the Justice Department.

The conspiracy the FBI investigated showed the Oath Keeper’s “extensive planning and preparation” to invade the Capitol. Prosecutors showed evidence of Oath Keepers with weapons at hotels not far from the Capitol and coordinating their movements to attack Congress.

On Jan. 6, Young and his sister Jessica Watkins, a former Army Ranger and veteran of the war in Afghanistan, met up with Oath Keepers including Kelly Meggs, 52, and his wife Connie Meggs, 59. Kelly is the self-described leader of the Florida chapter of the Oath Keepers, court documents show.

They met up with Jessica Watkins, a former Army Ranger and veteran who led the group into the building, documents show. The group was photographed and videotaped in a “military-style ‘stack’ formation” that marched up the center steps on the east side of the U.S. Capitol, breached the door at the top, and then stormed the building,” according to the Justice Department.

During the hearing, prosecutors dropped some charges against Young including aiding and abetting for deleting his Facebook account Jan. 8 to destroy evidence.

Young came out of the Capitol at 3:05 p.m., and around 4:22 p.m., posted to Facebook, “We stormed and got inside.” Young deleted his Facebook account two days later, prosecutors say.

The group is a “large but loose organized collection of militia who believe that the federal government has been coopted by a shadowy conspiracy that is trying to strip American citizens of their rights,” according to the FBI.

Young pushed for his sister Laura Steele of North Carolina to get into the group. By January, Steele was in.

As part of his plea agreement, Young agreed to pay $2,000 in restitution. The judge said the Capitol rioters caused $1.5 million in damages.

Young was originally arrested February in Tampa and turned over to U.S. Marshals. He was charged with six crimes, which included conspiracy and aiding and abetting the obstruction of the congressional proceeding.

While in jail, an attorney fought for Young’s release, citing he wasn’t a flight risk before his trail. Attorney Robert D. Foley wrote Young has “a strong character” is a “business owner and active member of his community.”

Foley said Young was suffering mentally and wanted to return to his Englewood home with his family. He was later released on house arrest and ordered not to speak to his sister or any other Oath Keepers and to stay away from a computer.

Young’s co-defendants in the conspiracy case are contesting the conspiracy charges brought against them. Prosecutors brought similar conspiracy charges against members of the Proud Boys, another far-right extremist group who fought with Capitol police outside and inside the building, and which “disrupted a joint session of the U.S. Congress that was in the process of ascertaining and counting the electoral votes related to the presidential election,” prosecutors said.

Since Jan. 6, federal authorities have arrested 465 people on charges related to the Jan. 6 Capitol breach, including over 130 charged with assaulting or impeding law enforcement, the Justice Department states. The investigation is ongoing.Image Credits: FBI & Department of Justice

Facebook
Twitter
Email
PrevPreviousIndependence Day weekend has arrived. Remember what it means.
NextInfrastructure legislation is a matter of life and death!Next