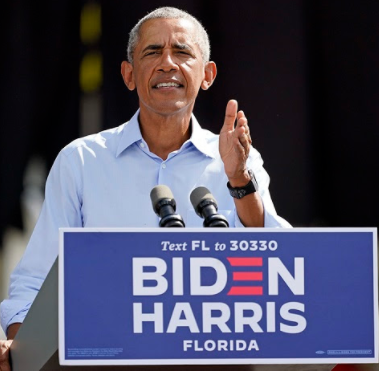 Former president Barack Obama is traveling to swing states to make the case for the Democratic presidential ticket, but his most effective contribution is in exposing and mocking President Trump’s inanities. Obama does not deploy goofy slurs or conspiracy theories; instead, he reminds us that what we are seeing is ridiculous, abnormal and unacceptable.

In Orlando on Tuesday, Obama told the crowd, “Our current president, he whines that ’60 Minutes’ is too tough,” he said referring to Trump’s walking out of an interview last week with CBS News’s Lesley Stahl. “You think he’s going to stand up to dictators? He thinks Lesley Stahl’s a bully.” He does not need to say Trump is a “crybaby” or “weak”; he lets Trump indict himself with his own conduct.

Obama also twists the knife on foreign policy. He pointed out that on Monday, Trump said that Russia’s Vladimir Putin, China’s Xi Jinping and North Korea’s Kim Jong Un all want him to win. “We know!” Obama said, laughing. “We know because you’ve been giving them whatever they want for the last four years. Of course, they want you to win. That’s not a good thing. You shouldn’t brag.”

Obama does not need to label Trump “nuts” or a “conspiracy monger.” Again, Obama simply needs to point out what Trump has done and asks the audience whether it’s normal. “[Our] president of the United States retweeted a post that claimed that the Navy SEALs didn’t actually kill [Osama] bin Laden. Think about that. And we act like, well, okay. It’s not okay.” He added: “We’ve gotten so numb to what is bizarre behavior. We have a president right now who lies multiple times a day, and this is not my claim. Even Fox News sometimes says, well, what he says, isn’t really true, he didn’t mean it. It’s not normal behavior. We wouldn’t tolerate it from a coworker. We wouldn’t tolerate it from a football coach. We wouldn’t tolerate it from a high school principal. I mean, we might have to put up with it if it was a family member, but we talk about them afterward.”

With his relaxed body language and humorous delivery, Obama conveys in these short vignettes what pundits and psychologists have spent years analyzing. In doing so, he makes clear to those who do not follow politics routinely that this is not hard. You don’t have to be a political junkie or policy wonk to figure out something is very, very wrong with Trump.

Obama also makes a serious point that taps into voters’ embarrassment and disgust with Trump’s conduct. The former president argues that when people see Trump behave in aberrant ways, it “emboldens other people to be mean and cruel and divisive and racist and it frays the fabric of our lives. It affects the way our children see things.” He adds: “It affects the way our families get along. It affects the way the world looks at America and it distracts from the truly destructive actions that his cronies are doing all across the government as we speak, actions that affect your lives.”

Moreover, by pointing out how obvious Trump’s defects are, Obama delivered a devastating blow to Republicans. These people who fancied themselves as “values” voters are now moral nihilists for whom nothing Trump does can be grounds for rejecting him. It is one of many reasons that voters need to sweep not only Trump, but also his fellow Republicans out of office.