The Electoral College. How exactly does it work? 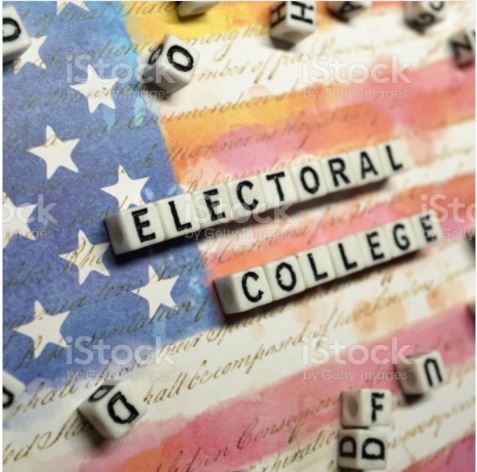 By Teresa Jenkins, Chair of the Charlotte County Democratic Party

When people cast their vote, they are actually voting for a group of people called electors. When you cast your vote in the presidential election, you’re not taking part in a nationwide popular vote, but rather helping decide who your state’s Electoral College delegates support. The popular vote weighs each vote according to the total turnout, not the total population. That’s why it’s important for Democrats and left-leaning NPAs (and disheartened Republicans) to turnout in high numbers to vote for Joe Biden in every Florida county.

The Framers of the Constitution created the Electoral College as they feared that under a national popular vote system, presidential candidates would only campaign in the big cities. So, although smaller states don’t have as much influence as Florida or Texas, their vote still matters.

Florida is a winner-take-all state, meaning that a presidential candidate will get all of Florida’s electoral votes whether s/he wins by one vote or a million votes. Maine and Nebraska are the only states that do not use a winner-take-all system.

Who are the electors? They’re appointed by the two major political parties in each state, so if you vote for Joe Biden, and he ends up winning the popular vote in Florida, then electors that the Democratic Party has chosen will cast votes for him.

The following is a summary of how the Electoral College will work in the 2020 presidential election:

Spring and Summer 2020: Nomination of Electors. The two most common methods are nomination by state party convention and by state party committee. Generally, the parties select members known for their loyalty and service to the party.

Nov. 3, 2020: Election Day, when voters in each state will select their presidential electors. The names of electors are not on the ballot, rather when a voter casts a vote for a presidential candidate, s/he is also casting a vote for the electors already selected by the party of that candidate. If a majority of voters in Florida, for example, vote for Joe Biden, the Democratic slate of electors is elected.

Dec. 8, 2020: Deadline for Resolving Election Disputes. All state recounts and court contests over presidential election results must be completed by this date.

Dec. 14, 2020: Meeting of the Electors. The electors cast their ballots for president and vice president. Each elector votes on his or her own ballot and signs it and the ballots are sent to various people: one copy goes to the president of the U.S. Senate (who is also the vice president of the United States); the state’s secretary of state; the National Archives and Records Administration; and the presiding judge in the district where the electors meet.

Dec 23, 2020: Deadline for Receipt of Ballots. The electors’ ballots from all states must be received by the president of the Senate by this date.

Jan 6, 2020: Counting of the Electoral Ballots. The U.S. Congress meets in joint session to count the electoral votes.

Jan. 20, 2020: Inauguration Day. The president-elect becomes the president of the United States.

Time is running out!  Please vote for Joe Biden and all Democratic candidates on this year’s ballot. Help your local Democratic Party phone or text voters and encourage your friends and neighbors to vote. Thanks for all that you do!