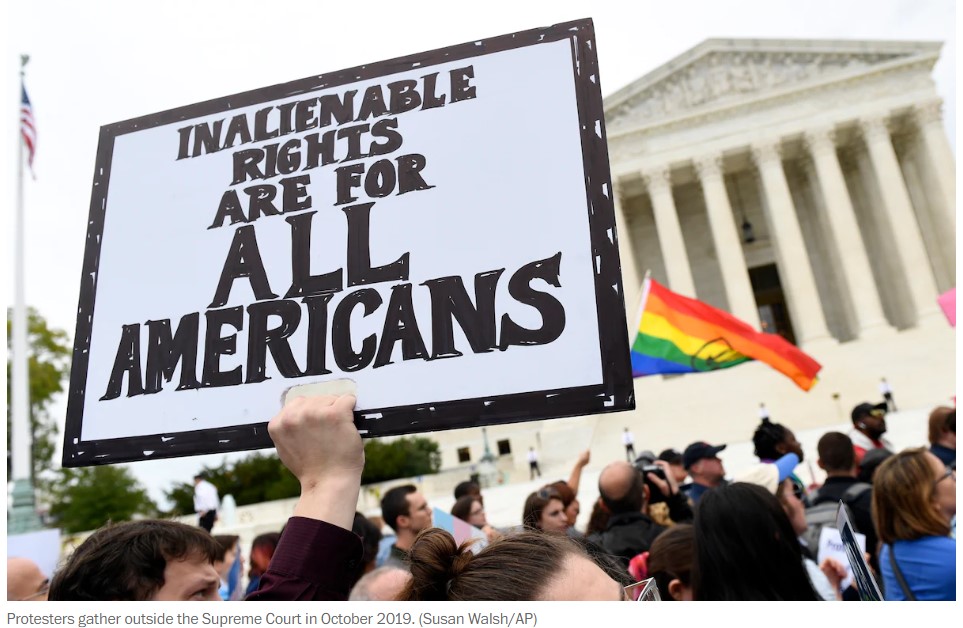 The election results from 2018, 2020 and this year, including Tuesday’s reelection of Sen. Raphael G. Warnock (D-Ga.), have clearly shown that Democrats can win by casting Republicans as a party of bigotry, intolerance and radicalism. They should embrace that approach — and give up on strategies that Democrats wish would work but don’t.

It’s hard to come up with a word that captures these views perfectly, but Democrats are now a coalition of the woke, the anti-racists and the tolerant.

“It’s been evident since at least 2017 that the largest force in American politics isn’t any economic coalition but a broad popular front in defense of liberal values like tolerance, democracy and cultural pluralism,” said Will Stancil, a policy researcher at the University of Minnesota who has written about how the increasing racial diversity of the suburbs benefits Democrats. “Rather than standing for any particular policy platform, this majority stands against Trump-driven reactionary politics.”

Yet many prominent Democrats remain deeply attached to two campaign approaches that haven’t been very successful. First, there is the idea of building a coalition across racial, geographic, religious and cultural lines that connects Americans based on their status as workers and on economic issues such as raising the minimum wage. That is what many left-wing groups and politicians have been trying to do, most notably Sen. Bernie Sanders (I-Vt.).

But there is little evidence of a collective “working person” sentiment in today’s America — or that one can be created, at least in the short term. Sanders couldn’t even build a cross-racial, urban-rural working-class coalition in the Democratic presidential primary, never mind the broader electorate. He lost among such voters to the decidedly-less-populist Joe Biden in numerous primaries in 2020.

A second strategy is creating a broad coalition that supports centrist policies. This is generally where outgoing House Speaker Nancy Pelosi (Calif.) and President Biden have steered the party — taking positions on most issues where a clear majority of the public agrees with Democrats. So that means supporting infrastructure spending and universal prekindergarten while opposing the “defund the police” slogan. The theory is that if you are taking policy positions on every issue that are shared by 60 percent or more of Americans, you’ll get an outsize vote share.

But Americans don’t vote just based on which party is closest to their stances on most of the issues, but also on partisanship, their social circles and many other non-policy concerns. So, even as Republicans have embraced stringent abortion restrictions and other deeply unpopular positions, they still get close to 50 percent of the votes in most national elections — and won the popular vote this past cycle.

There’s a third strategy staring Democrats right in the face. It’s what’s worked the past three cycles — whenever they’ve been willing to lean into it: Affirmatively running as the pro-tolerance, anti-Trumpism party — as some Democrats did, including Biden, right before the election. That approach both galvanizes the Democratic Party base and also wins over people who voted Republican in the past but are turned off by today’s version of the party.

“Dobbs, the Jan. 6 hearings, the Biden democracy speech, and other elements coalesced to convince enough Americans that the GOP was the party of extremists. And our smartest candidates capitalized on that and won,” said Tom Bonier, who runs a political data firm called TargetSmart that works with Democratic candidates and groups.

Michael Podhorzer, the former political director of the AFL-CIO, said, “In those states where the threats from Trumpism/MAGA were salient, especially Arizona, Georgia, Nevada, Michigan, Pennsylvania and Wisconsin, normal midterm expectations were shattered.”

Over the past six years, Democrats have gained a lot of ground among people living in the suburbs, those who are White and have college degrees, and a segment of former Republicans opposed to Donald Trump and his brand of politics.

These voters are not unified by their working conditions. Nor is there much evidence that they are particularly invested in infrastructure, police spending or other centrist policies.

What appears to unify the voting blocs moving to the Democrats is an aversion to Trump-style Republicanism. And there are potentially a lot more voters who could be reached with this approach — particularly voters of color, people under 45, those who live in urban and suburban areas, college graduates and women. The Democrats are already winning these blocs but are nowhere near 100 percent among any of them and could still make substantial gains.

The people currently voting Republican in these blocs (or not voting) probably aren’t in social circles dominated by Fox News-watching, evangelical-church-attending conservatives who might shun them if they voted Democratic. For people in these blocs, the notion that today’s Republican Party is just too radical for their support is probably something they are already hearing from their friends. They are likely uncomfortable with some of the crazy things that Republican election officials say and do, particularly on racial and LGBTQ issues.

“The suburbs where you have upwardly mobile, college-educated White voters, those are where the opportunities are. Not the sacred cow of White working-class voters,” said Cornell Belcher, a Democratic pollster.

A drumbeat about the terribleness of the Republican Party, particularly on issues around race and identity, is likely to keep many voters from backing the GOP. Instead of droning on about infrastructure, Democrats can spend the next two years declaring bluntly that a vote for any Republican candidate, no matter how moderate, is still a vote for a party that bans abortions, treats transgender Americans as second-class citizens, makes it harder for Black people and those in urban areas to vote, dumps undocumented immigrants off in left-leaning areas without any consideration of their well-being, bans the works of Black and LGBTQ authors from public schools — and questions election results, particularly those from heavily Black areas, when they lose.

“We need to keep leaning, 100 percent, into the attacks on freedoms, the attacks on democracy. That is a strategy that works,” said Jenifer Fernandez Ancona, vice president of the left-leaning group Way to Win.

I’m not suggesting that every Biden speech for the next two years should begin with a long diatribe about the terribleness of Republican officials. I am suggesting a few more of those diatribes. I am not arguing Democrats give up on White voters without degrees or those in rural areas. I am arguing the party might be overly fixated on those voters and ignoring other potential swing blocs.

Most important, Democrats must accept that in today’s America, “politics” for most people is whatever Trump said or who he met with that week, not the inflation rate or the minimum wage. I’m sure that centrist and swing voters say in polls and focus groups that they want politicians to talk about health care and jobs and be positive. But people’s actions are a stronger indication of their real beliefs and values. In 2018, with Trump constantly in the news, more Americans voted in the midterms than they had in decades. There was then even bigger turnout in the presidential election in 2020. This year, after the Supreme Court overturned Dobbs v. Jackson Women’s Health Organization, eliminating the right to abortion, there was a huge shift in voter registration — with women suddenly becoming much more likely to register than men.

What is actually galvanizing people is anger, not positivity — and issues such as separating children from their families at the border and banning abortions, not “kitchen table” concerns.

The image I suspect Biden, Pelosi and Sanders have of a voter who could swing from Democrat to Republican or the other way is a 50-year-old White man without a college degree who lives in suburban Philadelphia, works as a fireman and supports raising the minimum wage but opposes late-term abortions.

Sure, that’s one kind of swing voter. But the kinds of people who have been swinging to the Democrats are White women who have office jobs and college degrees and strongly support abortion rights. And the kinds of people who could swing to the Democrats are people who already have decent jobs and don’t really like all of the spending that the Biden administration is doing to boost the economy, but hate intolerance and bigotry even more.

As long as Trumpism dominates the Republican Party, woke politics are winning politics.