‘Where am I going to go?’ Floridians hit by a hurricane and a housing crunch 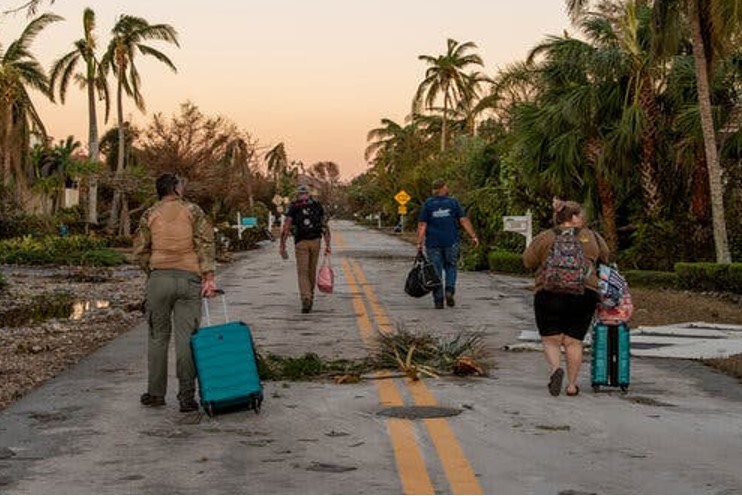 Losses from the storm are just coming into focus. But what is clear is that recovery will be hardest on people already struggling to make ends meet.

FORT MYERS, Fla. — Days after Hurricane Ian buffeted the state with a trifecta of wind, rain and storm surge, many Floridians are emerging from the wreckage uncertain of their next chapter — and fearing they may become homeless.

The extent of the damage and the number of people who lost their lives or homes is only beginning to come into focus. Much clearer is the storm’s likely broad and lasting impact on the recovery of those least able to afford it.

Now Mr. Davenport, a sanitation worker, must make a tough decision: get another home or another car. “My entire life changed in a matter of hours.”

After the storm, many Floridians, limited by low or fixed incomes, face finding a decent place to live in a state that is mired in an affordable housing crunch. The state’s enduring popularity, inflation and soaring rental costs have made it one of the least affordable places to live in the nation.

Already, an estimated 2.24 million households in Florida with incomes below $50,000 pay more than 30 percent of their income in rent or mortgage — more than a quarter of the total households, according to the University of Florida’s Shimberg Center for Housing Studies.

In counties that were under evacuation orders, less than 20 percent of homes have coverage through the National Flood Insurance Program.

Local officials and housing advocates worry about what the damaged housing stock will mean for people with low wages or fixed incomes. In interviews, some people said staying in water-ravaged homes is their only option.

The Aftermath of Hurricane Ian

“Cities will rebuild,” said Edward Murray, a housing expert and associate director of the Metropolitan Center at Florida International University. “But what about poor communities? But what about individuals?”

When the storm barreled through the state last week, it left a wide path of destruction that ran from Key West to the coastal cities of Naples and Fort Myers in the southwest, and through inland farming communities to the suburbs of Orlando. State and local officials in Florida have announced 103 storm-related deaths. The storm was indiscriminate in its march, leaving some places untouched and others unrecognizable, and it struck particularly vulnerable pockets that were no match for the storm’s power.

It ravaged mobile and trailer homes; it submerged the first floors of houses and peeled the roofs off apartment buildings. The hurricane devastated and displaced many workers and families already living check to check — and often unseen in the shadows of coastal Florida’s luxury living.

In Winter Springs, a city of strip malls and subdivisions in Seminole County, northeast of Orlando, Robert McLain, 67, a military veteran and retired construction worker, sat in the garage of his waterlogged rental home. With foot-high water marks in his home, there was no way he could move back in. Mr. McLain, who lives on social security and disability benefits, figured there were few options but to live in his car for a while. “I’m not running to go live in the Hilton, you know what I’m saying?” he said. “I’m totally screwed.”

Three hours’ drive southwest in Arcadia, an inland agricultural community in one of the state’s poorest counties, Joann Hampton, 50, stood on a raised pool deck, crying. The nearby Peace River had drenched much of her neighborhood. It submerged her backyard and house where water from the river continued to seep in, days after the storm passed.

“It’s all gone,” said Ms. Hampton, who had property insurance but, like many Floridians, not flood insurance. After moving from Fort Myers, Ms. Hampton bought her one-story ranch-style home for $44,000 in 1998. Her only income is a disability check and for now, she will live with a relative nearby. “We lost everything.”

Lee County bore the brunt of the storm. A New York Times aerial survey of Fort Myers Beach showed nearly 400 buildings damaged or destroyed in just the northern portion of the barrier island. The mayor of nearby Sanibel, a barrier island where about 6,400 people live year round, described it as uninhabitable. In Central Florida’s Seminole County, where flooding continues, officials counted at least 1,900 homes with damage. And in Key West, about 200 people were displaced by the storm.

Rental prices have increased by more than 30 percent over the last two years, according to Florida TaxWatch, a nonprofit research institute. Across the state, the median rent increased from about $1,340 in February 2020 to about $1,760 in February 2022.

“There was already a gap between what housing costs and what people can afford,” said Anne Ray, a researcher at the Shimberg Center for Housing Studies. “The communities that were hardest hit in Southwest Florida already had been seeing large increases in rent over the past year or so. A storm like this comes along and we could lose that critical supply of affordable housing.”

One factor is Florida’s success: the population has boomed, particularly in Southwest Florida, where relocating retirees and others of varying incomes are lured by the lack of state income tax along with year-round sunshine and endless beaches. In Lee County, home to hard-hit Fort Myers, Fort Myers Beach and Sanibel Island, the population grew by 27 percent between 2010 and 2021.

Much of the regional economy is powered by the tourism and service industries in which lower-income residents work in hotels, theme parks and restaurants. The state last week increased the minimum wage to $11 — though the median hourly wage was $18.23 in 2021.

Now, the storm’s destruction threatens to pinch a tight market.

“It will certainly compound the situation,” said Rebecca Hammock, Seminole County’s development services director. “Because if we lose housing stock, there’s not a lot of other affordable housing stock to relocate in.”

In Key West, a popular tourist destination, Javier Martínez, 49, was one of 35 people who lost their apartments in a blaze believed to be storm related.

He had lived there for three years, enough time for seismic shifts in the city’s real estate market. He moved in paying $1,500 a month for a three-bedroom apartment, but, he says, a similar place now is double the price or more.

“We are trying to stay in Key West, but it is very difficult,” said Mr. Martínez, who works in a restaurant and is now staying with his sister nearby. “Thirty-five people lost their apartments, and not one has found a place.”

After Hurricane Andrew pummeled the state in 1992, housing in lower-income areas in Miami suffered more damage and lagged significantly in the recovery process, researchers at the Texas A&M University found.

After four hurricanes damaged more than 700,000 homes in 2014, the state’s lawmakers voted to create a $208 million fund for housing recovery. In 2019, Gov. Ron DeSantis allocated $140 million to the construction of affordable housing after Hurricane Irma worsened housing shortages in 2017. President Biden has already approved federal disaster and recovery funds for counties impacted by the storm.

Members of the United Cajun Navy heading into a neighborhood in North Fort Myers, Fla.Credit…Hilary Swift for The New York Times

Zayri Laboy carried her daughter, Naomy Bentis, after returning to her home in Hideaway Park in North Fort Myers, which was hit by Hurricane Ian.Credit…Hilary Swift for The New York Times

Neri Contreras Alvarado, 45, wonders if he even qualifies for federal aid, and if so, how to get it. An immigrant who has permission to work in the United States, but does not have citizenship, he lives in a mobile home in East Naples with his wife and three other people, including a 5-year-old. But the storm left his mobile home muddied and soaked with dirty floodwater and Mr. Contreras does not think he and his family can stay in it long-term. He is flat-broke — and he even lost the expensive new bicycle that he had used to get to work.

Mr. Contreras moved to the United States from Guatemala 16 years ago. He and his relatives are among the thousands of Central Americans who flocked to the United States in recent years and helped maintain the tourism industry in Florida. He works at a hotel in maintenance making $15 an hour but was out of work most of the year because he needs a heart transplant. He only recently returned to his job, working part-time. His wife worked at a restaurant that has closed because of the storm.

“It’s not just us. It’s everyone,” he said. “We were left without any money, without a place, without food.”

An hour’s drive north in an unincorporated slice of Lee County, Mr. Davenport, facing the loss of his car or his home, struggled with the options. He plans to try to clean his $30,000 trailer — he is still paying for it — to stave off mold and make it livable. Asked if he planned to move, he said, “Where am I going to go?” The waterlogged car will have to wait.

As he talked about the storm surge, Mr. Davenport, who is a widower and lives alone, suddenly started to cry.

“I don’t have a place to live. I have been self-reliant my entire life,” he said. “I’ve never counted on anybody, and I’m not about to now.”

He says he will ride his bike to work. It’s a 10-mile trip each way.

Frances Robles is a Florida-based correspondent who also covers Puerto Rico and Central America. Her investigation of a Brooklyn homicide detective led to more than a dozen murder convictions being overturned and won a George Polk award. @FrancesRobles • Facebook

Richard Fausset is a correspondent based in Atlanta. He mainly writes about the American South, focusing on politics, culture, race, poverty and criminal justice. He previously worked at The Los Angeles Times, including as a foreign correspondent in Mexico City. @RichardFausset